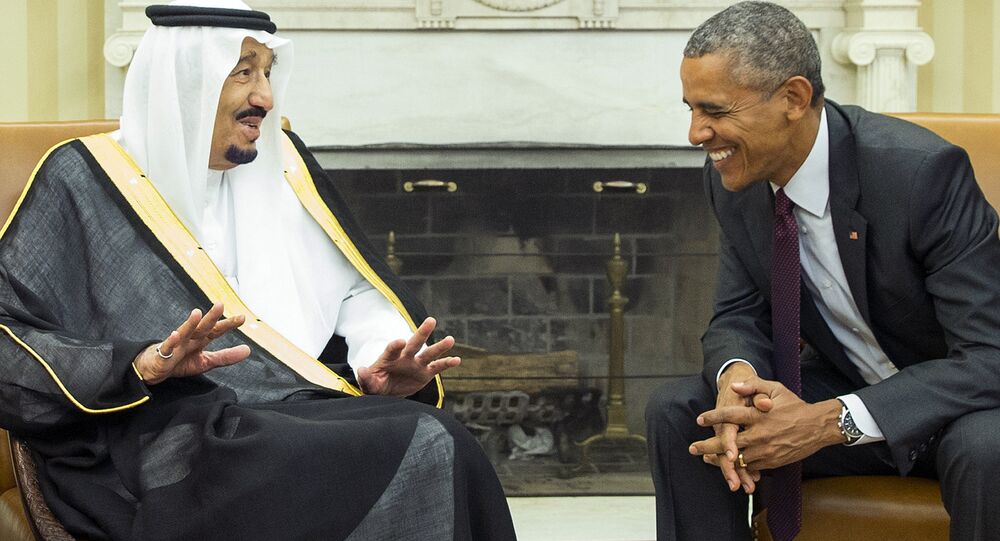 The nonprofit Human Rights Watch released a statement Friday calling on the White House to end production and sale of weapons claimed by the organization to violate international law.

On Friday, Human Rights Watch (HRW) issued a statement alleging that Saudi Arabia continues to use US-made cluster munitions near civilian areas in Yemen. The nonprofit organization observes that these weapons sow indiscriminate carnage in violation of international law.

© AFP 2020 / FEDERICO PARRA
The Next US Coup in Latin America: Obama Takes Aim at Venezuela’s Maduro

HRW is calling on Washington to cease the production and sale of cluster munitions, in accordance with a 2008 treaty banning the weapons, signed by 119 countries. Although the United States, Saudi Arabia, and Yemen have yet to sign and ratify the treaty, the organization claims that the overwhelming consensus of the world community creates enforceable customary international law.

Rights workers point not only to the distribution of these weapons, but the indiscriminate use of cluster munitions in civilian areas by the Saudi-led coalition in Yemen fighting Houthi forces. HRW has documented six separate instances in which CBU-105 Sensor Fuzed cluster bombs were used by Saudi forces in Yemen in the past year.

HRW documented cluster-bomb injuries to 12 cement factory workers in a July 2015 bombing, as well as injuries to a woman and her two children in a December 12, 2015, attack, and two more civilian injuries from an April 27, 2015, attack. Each of these incidents involved the use of the CBU-105 munitions.

The non-profit group claims to have documented civilian casualties in Yemen from the Saudi-led coalition’s use of four types of US-made air-dropped or ground-launched cluster munitions, but the report does not document specific use of or injury traced to a cluster bomb less sophisticated than the CBU-105.

"We oppose any use of cluster munitions due to the harm caused at the time of attack and because the weapons leave explosive remnants that also kill and harm civilians," Ahmed Benchesmi, chair of the Cluster Munitions Coalition at Human Rights Watch, told Sputnik.

Saudi Arabia openly admits to using the CBU-105 in its fight against the armed Houthi opposition faction in Yemen, but denies the use of other types of cluster munitions. US export laws were updated in December 2007 prohibiting the sale of cluster munitions, except for the CBU-105, but the Saudi government maintains a stockpile of less-sophisticated cluster munitions from sales occurring between 1970 and 1999.

The United States refused to sign the 2008 treaty, citing a unique feature of the CBU-105 cluster bombs which are designed to self-destruct, or self-deactivate. The US argues that these weapons serve important tactical purposes and should have been excluded from the ban because they are ‘smart’ cluster bombs designed to limit indiscriminate harm to civilian populations.

Each CBU-105 disperses 10 BLU-108 canisters that each subsequently release four submunitions called "skeet." Cluster bomb submunitions, which many children mistake for toys, are designed to explode above the ground and project an explosively formed jet of metal and fragmentation downward. These weapons cause catastrophic injuries, leading to death or multiple amputations.

The issue of unexploded bombs remaining on the ground only to detonate when picked up by a small child was worked into the design of the CBU-105. The weapon’s skeet are programmed to self-destruct if the weapon descends to 50-feet above ground level without reaching a target. The weapons come with a fail-safe, a backup timer that disables the skeet after landing on the ground.

The weapons are the only cluster bomb in the US arsenal with a failure rate – defined as unexploded munitions that compromise the safety of civilians – of less than 1%. Nonetheless, if the weapons are used at high volumes the threat of indiscriminate harm may be greatly reduced, but not eliminated.

HRW refuses to accept Washington’s distinction between 'dumb' and 'smart' cluster bombs, asserting that the White House continues to embrace a policy that places civilian lives at risk.

The organization also disagrees with US claims regarding the CBU-105’s failure rate. "Multiple failures of the munitions resulted in unexploded ordnance and call into question the claimed reliability rate of better than 99 percent," their media release states.