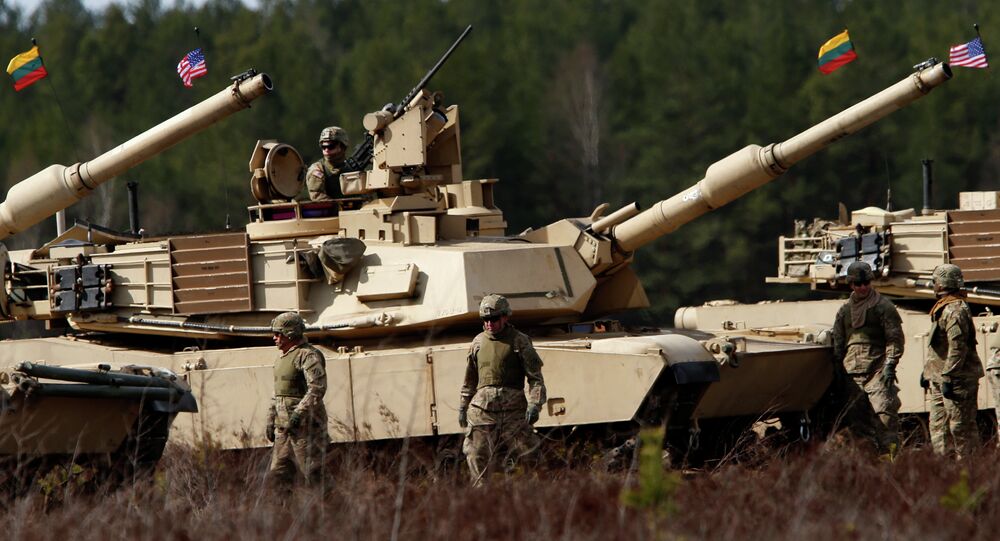 US to Deploy Tanks for Provocative Georgian Military Exercises

In its latest encroachment on Russia’s borders, the Pentagon is for the first time transporting tanks from Bulgaria to Georgia, in preparation for military exercises.

During last year’s Noble Partner wargames in Georgia, the first of its kind, the US deployed Bradley Fighting Vehicles. For the second-annual exercise, the US Army’s 1st Armored Brigade Combat Team, 3rd Infantry Division has loaded Abrams tanks onto ferries in Varna, Bulgaria, en route for Batumi.

© AP Photo / Shakh Aivazov
‘The Americans Are Coming!’: US Tanks to Take Part in Georgia Drill

"We are here to look at port in Batumi to understand what is required to move equipment, how fast we can move equipment. So this is part of professional soldiers studying the logistics," said Gen. Ben Hodges of US Army Europe, according to EurasiaNet, ahead of the tanks’ arrival.

"But we also came here to demonstrate to Georgia…that we are committed to work with Georgia, to continue work improving interoperability."

In January, Georgian Minister of Defense Tinatin Khidasheli indicated that the exercises are meant to deter Russian "aggression."

"Our task is to make sure that anyone, be it a person or a country, thinks twice before taking any wrong decision," Khidasheli said. "It is not arms we are talking about but the need to meet the most imperative needs of the Georgian army."

The war games, which will include 650 US troops, 150 British troops, and 500 soldiers of the Georgian army, is part of a series of aggressive exercises that has been carried out by Western powers in Eastern Europe. The Georgian troops participating will include a company that is part of the NATO Response Force and the exercise will be held at the alliance’s new facility in Vaziani, despite the fact that the country is not officially a member.

Moscow has condemned the drills as an unnecessary provocation.

"We consider such a consistent 'exploration' of Georgian territory by NATO forces to be a provocative step, aimed at deliberately rocking the military-political situation in the South Caucasus," the Russian Foreign Ministry said in a statement on Friday.

The United States and its allies have refused to recognize the independence of those autonomous republics.