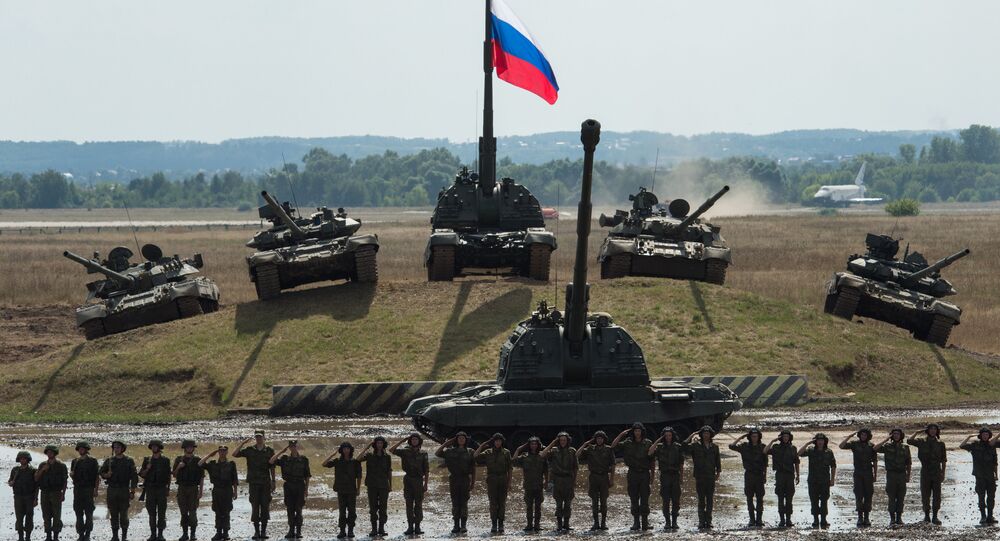 Caught Off-Guard: Russian Military Hardware More Than a Match for US, NATO

Russia's military forces are far from weak, as the West conveniently preferred to think until recently; an analysis of open source data reveals that Moscow is not only on a par with its peers, in terms of certain types of military equipment it outperforms the US and NATO and is ranked second in the “Power Index” rating.

Ministry of defence of the Russian Federation
Surprise, Surprise: ‘Russia’s Military More Advanced Than People Thought’
Many of the western countries have got accustomed to viewing the Russian Armed Forces as weak and ailing and its military hardware – as outdated and obsolete.

This seems to be far from the truth, however.

“Until a few years ago, the West assumed that after the collapse of the Soviet Union, the Russian military was languishing for a long time. The equipment was considered ailing,” writes the online German magazine Focus in a recent article on the topic.

“But those days are gone: Russia has upgraded vigorously and in some areas the Russians have even outmatched the US,” it adds.

The outlet refers to the “Power Index” rating compiled by the Global Firepower (GFP) website.

The ranking is based on more than 50 factors, including military budget, available manpower, and the amount of military hardware each country has in its arsenal. Nuclear capability is not taken into account.

The higher the rating, the lower the country’s position in the overall ranking. The perfect score would be 0.000.

© AFP 2021 / FAYEZ NURELDINE
The Art of War: Will Russia Outplay Washington's Cunning Geostrategists?
However what comes as a big surprise is that in a number of categories Russia is ranked far ahead of the US, whose military budget ($581 billion) outstrips everyone else. By comparison, Russia’s military budget is only $46.6 billion, which is 12 times less than that of the US.

China comes second in this category, with $155.6 billion, Saudi Arabia is ranked third with an annual spend of $56.7 billion. Great Britain is fourth with $55 billion.

The Categories Where Russia Comes First

Multiple Launch Rocket System (MLRS) Strength: 3,793 for Russia vs 1,331 for the US, which comes only sixth in this rating.

© Sputnik / Alexey Filippov
Almost 90% Russians Believe in Army’s High Combat Readiness
As explained by the website, MLRS is a tracked or wheeled vehicle mounting a rocket launching system atop its hull. It offers a devastating physical and psychological effect on the enemy, capped with high explosive, anti-personnel or chemical warheads as needed.

Russia’s Merchant Marine Strength is also a lot higher (1,143) than that of the US (393), with a relatively comparable Fleet Strength (362 vs 473 correspondingly). Corvette Strength rating however is more powerful for Russia (81) vs the US (none).

In Mine Warfare Strength Russia also comes far ahead, ranked first with 45 vs only 11 for the US, which is ranked twelfth.

The Power Index also provides a very interesting non-military comparison between Russia and the US. For example, Russia’s external debt is a lot less than that of the US and is calculated in billions, not trillions of dollars.

© Flickr / Alessio Jacona
Italy to NATO: Talk to Russia Now, or Regret it Later
In the category Reserves of Foreign Exchange and Gold Russia comes far ahead of the US and is ranked fifth ($377.8 billion), while the US is only seventeenth ($130.1 billion). Here China comes in first ($ 3.2 trillion) followed by Japan ($1.2 trillion).

Oil Production results in an advantage for Russia, while Oil Consumption is higher in the US.

Focus notes that the massive modernization and procurement program has reinstated Russia’s prominence on the world stage. The European Council on Foreign Relations, a European think tank, has called Russia’s development a “quiet military revolution.”

The think tank also recognized the administrative and training reforms that have trimmed the size of Russia’s top heavy armed forces, producing a group of smaller, more mobile, and more versatile military units.

While it argues that a major military escalation is not imminent, it does not rule it out, and suggests that Europe should be prepared to handle hybrid scenarios that combine conventional and non-conventional warfare.

Russia Enters Trio of Most Capable Military Nations in 2016