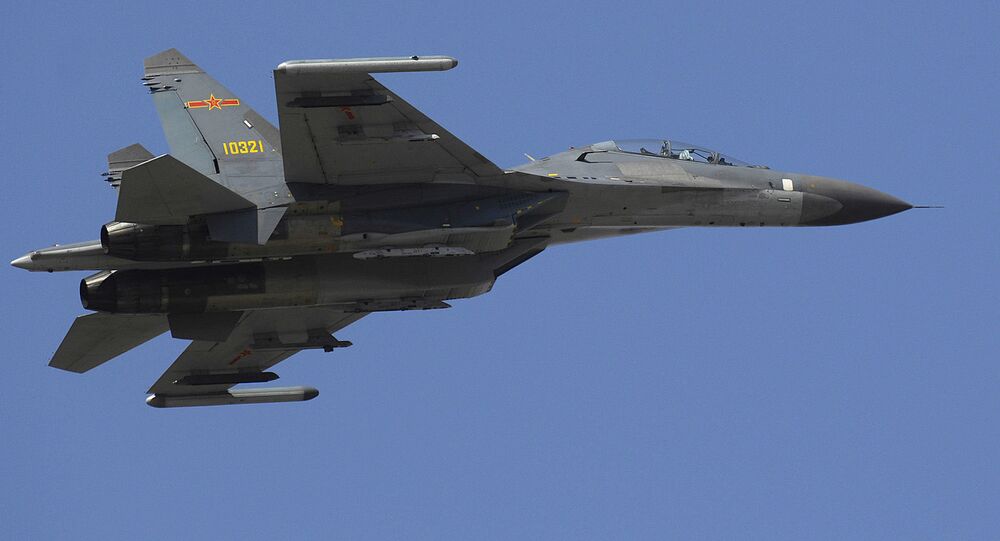 "Are short-range American tactical fighters relevant in the Pacific theatre?" US defense expert Dave Majumdar asks, adding that F-22 Raptors and F-35 Joint Strike Fighters could be outperformed by the sheer numbers of Chinese jets.

© Flickr / Airman Magazine
Left Behind: US Jet Fighters Hold No Candle to Russian, Chinese Rivals
China's J-11 fighter jets were designed as a copy of the Soviet-made Su-27/Su-33 Flanker, however, its new J-11D is considered the most advanced land-based single-seat Chinese aircraft.

Reportedly, the J-11D fighter jet is equipped with an active electronically scanned array (AESA), an air refueling system, and carries the fifth-generation PL-10 air-to-air missiles. Chinese media outlets claimed that it made its first flight in April 2015.

"China's Shengyang J-11 unlicensed derivative of the Russian-developed Su-27 Flanker has become the mainstay of the People's Liberation Army Air Force (PLAAF). While the Chinese-built jets are not able to match US-built fighters one-for-one, China is building a lot of them," US defense expert Dave Majumdar pointed out in his article for the National Interest.

UK Ministry of Defence
Harsh Reality: USAF Admits F-35 Can't Fight at Close Range
According to the expert, the J-11D "is very comparable" in a lot of respects with the Russian Su-35S. Last year Majumdar carried out a brief review of the Sukhoi Su-35S Flanker-E dubbing it "an extremely dangerous foe to any US fighter."

The expert elaborated that the J-11D is purportedly using radar absorbent materials in order to "reduce the jet's signature" and is equipped with an infrared search-and-track system (IRST) and revamped electronic warfare systems. In addition, the J-11D boasts China's most advanced WS-10 jet engine.

Majumdar insists that the US F-22 Raptors and F-35 Joint Strike Fighters are superior to their Chinese counterparts. However, US fighter jets need bases to operate from or tankers to refuel from, and that is where the shoe pinches, the expert noted.

"If there were to be a war in the Western Pacific, the massive air battles that many might envision, are not likely to take place because the United States and our allies have few bases in the region to host tactical fighters like the F-35," Majumdar pointed out, adding that in the event of a direct conflict China is almost certain to destroy these airbases.

"Further, without intelligence, surveillance and reconnaissance assets, those jets couldn't be properly supported — and it becomes even more difficult when the Chinese attack the space assets and data networks that hold America's fighting forces together," the expert added.

Majumdar underscored that instead of mocking the F-35's chances of surviving in a dogfight, experts should answer the question: "Are short-range tactical fighters relevant in the Pacific theatre?"