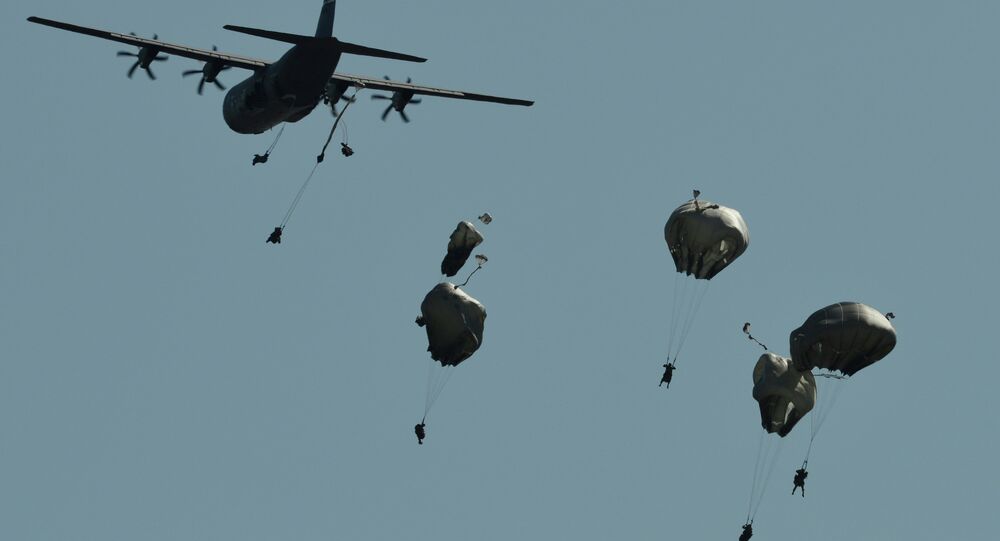 Over 1,000 NATO Airborne Forces Take the Plunge Over Germany During Drills

More than 1,000 NATO paratroopers jumped from aircraft into the skies of Germany during the high point of the Exercise Swift Response, one of the alliance's largest airborne drills in Europe since the end of the Cold War.

Paratroopers from 11 NATO member states are taking part in the US Army-led Exercise Swift Response in Germany, Romania, Bulgaria, and Italy.

© AFP 2021 / ARMEND NIMANI
NATO Occupies European Skies With Biggest Drills Since Cold War
This stage of the drill took place at the training area at US Army Garrison Hohenfels in southern Germany.

The massive airborne combined joint forcible entry operation is being staged in the afore-mentioned four countries and is claimed as the largest combined airborne training on the continent since the end of the Cold War.

Exercise Swift Response features more than 4,800 soldiers from Bulgaria, France, Germany, Greece, Italy, the Netherlands, Poland, Portugal, and Spain, as well as the UK and the US.

The exercise is designed to integrate multiple allied nations' high-readiness forces to operate as a cohesive team and demonstrate the alliance's capacity to rapidly deploy and operate in support of sustaining a strong and secure Europe.

During the drill, the participants conduct simultaneous airborne joint forced entries in to Germany's Hohenfels Training Area and Bulgaria's Novo Selo Training Area with follow-on training at both locations.

The exercise is scheduled to conclude on September 13, with multinational platoon and company live fire at the Grafenwöhr Training Area in Germany.