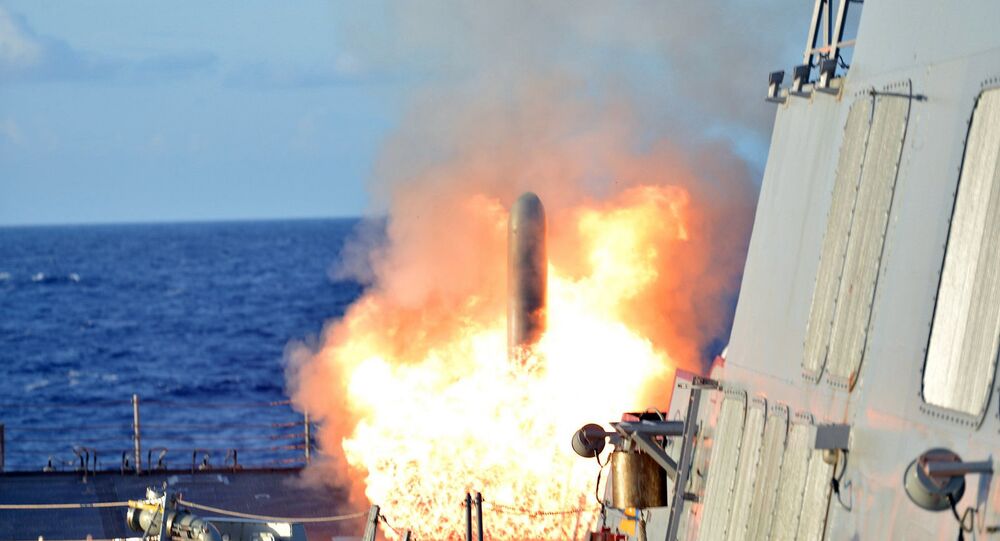 Pentagon Outranged by Chinese Anti-Ship Missiles, Scrambles to Save Face

Desperate to compete with China’s long-range anti-ship missiles, the US Navy is considering one of two options: forge ahead with the expensive, but state-of-the-art LRASM, or upgrade the Cold War-era Tomahawk, a missile never intended for naval warfare.

Beijing unveiled its DF-21D Dong Feng "carrier killer" missile in 2014. Rumored to be capable of traveling at Mach 10 – or ten times the speed of sound – with an effective range of 1,200 miles, the Navy has expressed concern that the weapon could pose a major threat to US aircraft carriers in the event of conflict.

On Wednesday, US Deputy Chief of Naval Operations Joseph Aucoin outlined the Pentagon’s plan for how best to counter the Dong Feng.

One option is the Tomahawk missile. Introduced in the 1970s, that weapon is now produced by US defense contracting firm Raytheon. While it has proven remarkably reliable during its nearly 40 years of service, much of the Tomahawk’s success is based on stationary, land-based targets.

Except for a single model now out of service, the Tomahawk is not designed for mobile, floating targets, and would have to receive a significant upgrade before they could be any match against the Chinese Navy.

The other option is Lockheed Martin’s Long Range Anti-Ship Missile (LRASM), which the Pentagon’s research arm DARPA called "a leap ahead in US surface warfare capability."

The LRASM boasts the capability of operating either independently or with remote guidance, and can survive GPS jamming.

To decide between the two, Aucoin told reporters at the Center for Strategic and International Studies that he wants "a competition to get the best munition."

"What I would like to see happen is take those capabilities that we need and start inserting those into a Block IV [Tomahawk], and [compare that] to what we have with LRASM Increment 1, and have those two compete for the next-generation strike weapon," Aucoin said, according to Breaking Defense.

Even if the Tomahawk turns out to be the better long-term option, Aucoin said the Navy would still purchase LRASMs to fill the “urgent operational need” in the short-term.

It could be a neck-and-neck race. Tomahawks are relatively cheap, compared to the approximate $2 million price tag for each LRASM. Tomahawks also have a longer range and feature a larger payload.

But the LRASMs are durable, and that could prove much more effective against the Chinese Navy. While Tomahawks may work well against low-tech adversaries like the self-proclaimed Islamic State terrorist group, they could be easily shot out of the sky by more sophisticated defense systems.

That means, accounting for loss, more Tomahawks would be needed to do the job that could be accomplished by a single LRASM.

Even if LRASM and Tomahawk are the main competitors, there are, of course, a couple of other options being considered by the US Navy.

"Another option in the mix is [Norwegian firm] Kongsberg’s Naval Strike Missile, which as about the same range and coast as LRASM, but is already in production," Bryan Clark, former top aide to the Chief of Naval Operations, said, according to Breaking Defense.

There is also the possible the Pentagon could modify the SM-6 Standard Missile anti-missile defense system to take on offensive capabilities. Still, those cost roughly twice as much as a LRASM, and would only serve as more of a backup in a combat situation.

Whatever the US Navy decides, LRASM isn’t expected to be deployed for another three years. If that’s the immediate, short-term option, no wonder the US is so nervous about the Dong Feng.