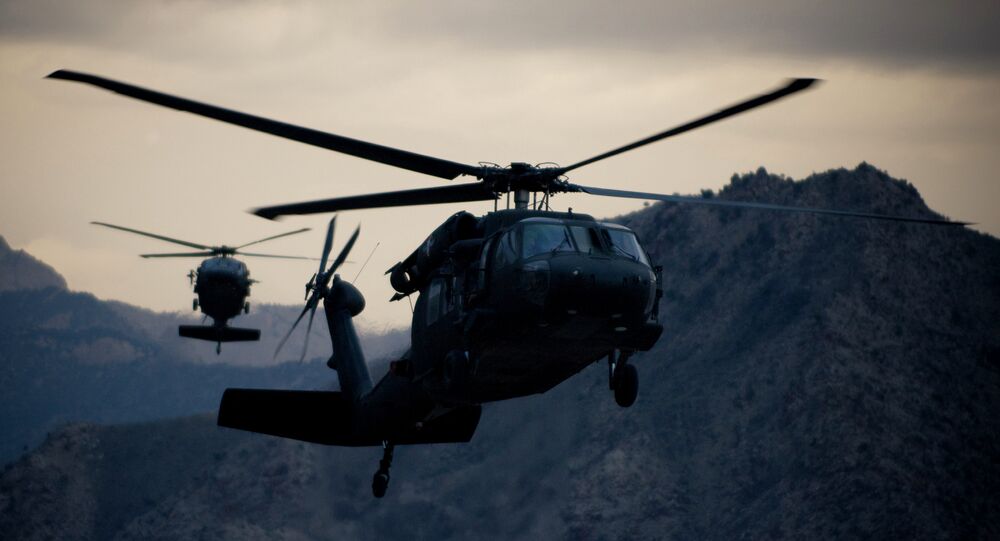 Already the largest military contractor in the world, Lockheed Martin is about to become even larger, purchasing Sikorsky Aircraft for $9 billion, raising concerns about a corporate monopoly.

In the world of defense contracting, three companies reign supreme: Boeing, Northrop Grumman, and Lockheed Martin. Pulling in over $45 billion last year, Lockheed is easily at the head of the pack. While Boeing raked in over $90 billion in 2014, its military wing accounted for $30 billion, and Northrop places third with nearly $24 billion in annual sales.

© AP Photo / Elaine Thompson
New V-280 Valor Tiltrotor May Replace Entire US Army Helicopter Fleet
But Lockheed’s latest purchase is expected to ensure that the company remains in the lead for decades to come. For $9 billion, the defense giant will acquire Sikorsksy Aircraft from United Technologies Corp. Producer of famed Black Hawk helicopter, Sikorsky’s acquisition will allow Lockheed to compete for $30 billion worth of contracts available on the rotorcraft market.

"Sikorsky is a natural fit for Lockheed Martin and complements our broad portfolio of world-class aerospace and defense products and technologies," CEO Marillyn Hewson told analysts, according to Reuters.

The company has been climbing steadily through a series of acquisitions since the 1990’s. As part of a $10 billion deal in 1994, Lockheed merged with Martin, a leader in chemicals, aerospace, and electronics. In 1996, the corporation bought electronics company Loral Corp for $9.1 billion.

The purchase of Sikorsky is the company’s largest deal in nearly two decades.

Currently a leading producer of navy ships and satellites, Lockheed is also developing the controversial F-35 fighter jet. Despite spending nearly $400 billion on the aircraft, the F-35 still contains a number of technical flaws and is nowhere near being combat-ready.

With a rotorcraft company like Sikorsky under its belt, Lockheed Martin could potentially begin producing next generation combat helicopters.

"Together, we’ll offer a strong portfolio of helicopter solutions to our global customers and accelerate the pace of innovation and new technology development," Hewson said, according to the Verge.

But that’s only if the acquisition meets the approval of the US Defense Department. In the interest of competition, the DOD has the option of blocking any mergers involving major defense contractors. After surveying the result of Sikorsky’s sale on the defense markets, a federal antitrust review could hinder Lockheed’s plans.

Still, Hewson remains confident. She insists that the sale will in no way reduce the number of helicopter-production competitors. To offset the Pentagon’s concerns, Lockheed also plans to sell or spin off $6 billion in other assets.

"Between those two elements, it is very positive," Hewson said.

If all goes according to plan, Lockheed expects to close on the deal no later than the beginning of 2016.