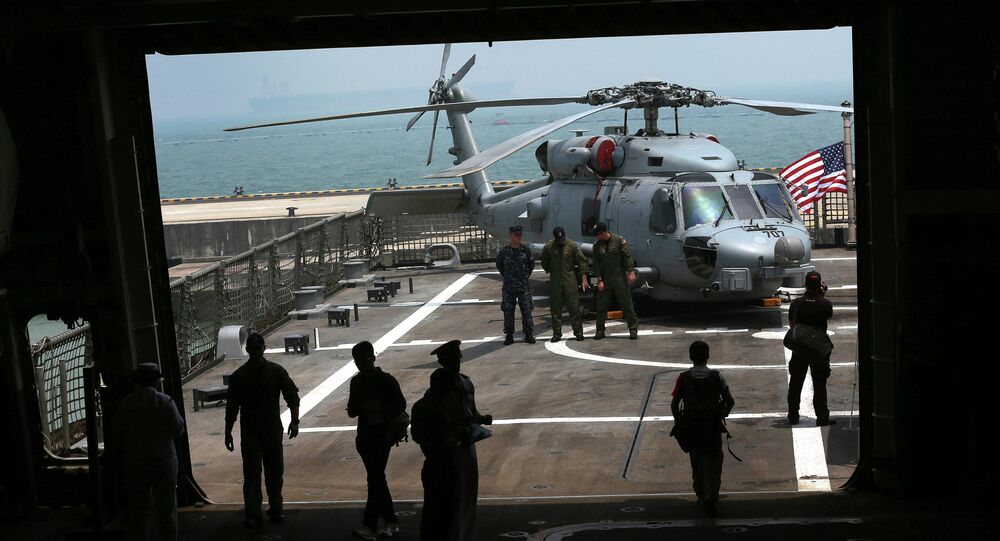 On July 13, the US and Singapore naval forces began a joint maritime exercise at Changi Naval Base located in Singapore Strait, which is situated close to the South China Sea. The area holding potentially significant oil and gas reserves, is the subject of a territorial dispute between several regional countries.

The exercises known as the 21st annual Cooperation Afloat Readiness and Training (CARAT) Singapore will involve 1,400 personnel from both countries and will last till July 24.

It is part of a series of bilateral naval exercises conducted by the US Navy (USN) with partner countries in South and Southeast Asia.

© AP Photo / Bullit Marquez
Philippines Escalates Military Games with US, Japan in South China Sea
The exercises will involve five ships, a submarine, a naval helicopter, a maritime patrol aircraft and a fighter aircraft from the Republic of Singapore Navy (RSN), while the US Navy and US Marine Corps are participating with three ships, a submarine, three naval helicopters and a maritime patrol and reconnaissance aircraft.

The training will also feature a shore phase in addition to the sea phase. It will include professional seminars and subject matter exchanges to allow US and Singaporean personnel to exchange top practices and enhance cooperation, including field training events, an aviation symposium, board, search and seizure drills.

The two countries started the inaugural edition of the exercise in 1995. This year, apart from a joint torpedo firing exercise, both navies will employ their Unmanned Aerial Vehicle (UAV) systems for conventional maritime warfare operations as part of Ex CARAT for the first time.

“Over the years, Exercise CARAT has provided both navies with invaluable training and enhanced interoperability. I believe that it is this close friendship and deep mutual understanding that form the basis of trust,” RSN Fleet Commander Rear-Admiral Lew Chuen Hong said.

US Defense Secretary Flies Out for Security Talks With Asian Countries