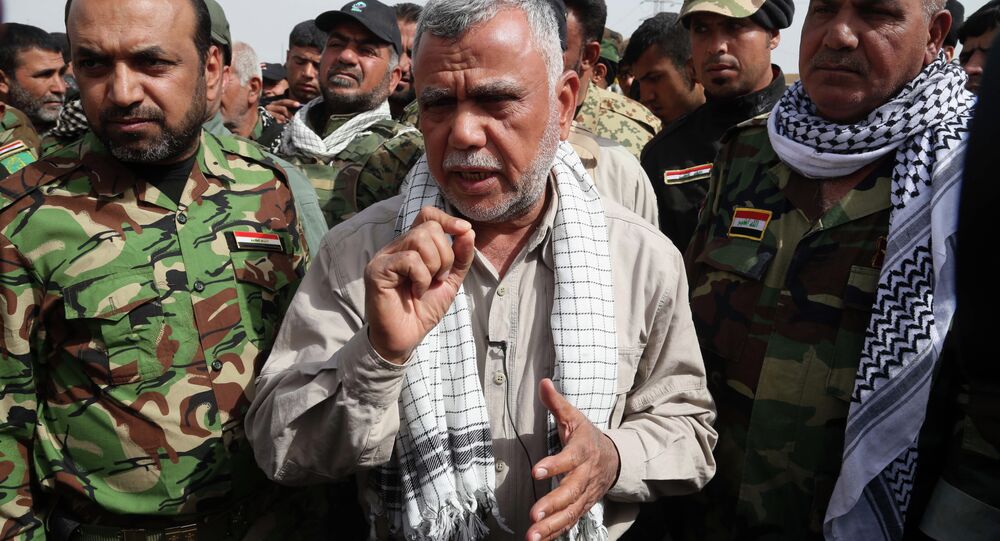 The commander of the Shiite militia, the Badr Organization, has slammed military figures who called for the US to help liberate the strategic city of Tikrit from the self-proclaimed Islamic State (IS), calling them “weaklings.”

During his visit to Camp Ashraf, north of Baghdad, on Sunday, Hadi al-Ameri reiterated his rejection of the US-led intervention in their operation, confirming that the forces have been heavily shelling IS positions, and stressing that the Iraqis do not need the US airstrikes to take back Tikrit.

However, the Iraqi commander hailed Tehran’s effort in assisting the Iraqi forces in their fight against the Islamic State, saying Iran’s Major General Qassem Soleimani, a senior commander of the Islamic Revolution Guards Corps (IRGC), has been of great help in the anti-terror operation.

"Qasem Suleimani is here whenever we need him … He was giving very good advice. The battle ended now, and he returned to his operations headquarters," Ameri said.

Earlier in the week, Iraqi Army Staff Lieutenant General Abdulwahab al-Saadi of the Salaeddin province, called for the US airstrikes on IS positions, as they "are able to locate the targets," and carry out accurate attacks.

"With the advanced technology of the aircraft and weapons they have, of course (strikes) by them are necessary," he said.

This comes several months after the US and its allies started conducting a series of airstrikes against the terrorist group in Iraq and Syria, but have failed to dislodge the group.

On Sunday, CIA Director John Brennan acknowledged that IS militants have been stopped in Iraq and Syria.

"Clearly, ISIS momentum inside of Iraq and Syria has been blunted and it has been stopped," Brennan said on Fox News Sunday. "Our working with the Iraqis and the Iraqis now trying to push back against it, it is having some great, I think, progress."

Meanwhile, the Pentagon confirmed that the Iraqi government has not requested any air support since the Tikrit operation was launched on March 2.

Around 30,000 Iraqi troops, including Shiite militias and Sunni tribes, began a large-scale operation to recapture Saddam Hussein’s hometown of Tikrit.

According to reports, the Iraqi forces have regained much of Tikrit from the Islamic State militants following heaving firefight in the strategic city.

On March 16, Iraq’s Interior Minister Mohammed Salem al-Ghabban called for a temporary halt of the operation to allow civilians to leave the northern Iraqi city.

US Military on Alert After ISIL Releases 'Death List' of Servicemen