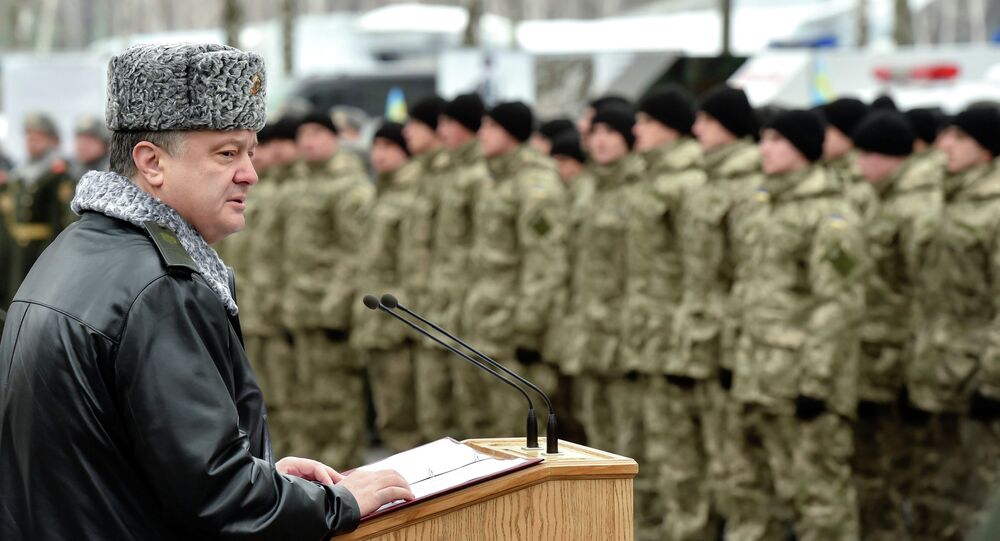 US 173rd Airborne Brigade Commander Michael Foster said at the Center for Strategic and International Studies in Washington, DC said the US would deploy personnel by the end of this week to train the Ukrainian national guard.

© Sputnik / Mikhail Palinchak
Poroshenko Increases Force Numbers Amid Shaky Truce in Donbas
WASHINGTON (Sputnik) — The United States will deploy personnel by the end of this week to train the Ukrainian national guard, US 173rd Airborne Brigade Commander Colonel Michael Foster said at the Center for Strategic and International Studies in Washington, DC on Monday.

“Before this week is up, we’ll be deploying a battalion minus… to the Ukraine to train Ukrainian forces for the fight that’s taking place,” Foster stated. “What we’ve got laid out is six United States companies that will be training six Ukrainian companies throughout the summer.”

The training will take place at the level of US and Ukrainian national guard companies, Foster explained, adding that “we have nothing above battalion staff level” engaged in the military training.

© Sputnik / Evgeny Kotenko
Nationalist Aidar Unit Reorganized As Separate Assault Battalion of Ukraine's Army
The current plan is for US forces to stay six months, he said, and noted there have been discussions about how to increase the duration and the scope of the training mission.

The current channels for military training set up between Ukraine and the United States would not be used for transferring defensive lethal aid if the United States decided to provide arms to Ukraine, Foster told Sputnik on Monday.

“It would go through something separate… We would not funnel the lethal aid or arms through that [training] event, we would use a secondary method for that,” Foster said, adding that a completely separate process is preferable.

The United States and NATO have been engaged in military training exercises with Ukraine since the fall of 2014, according to NATO press releases.