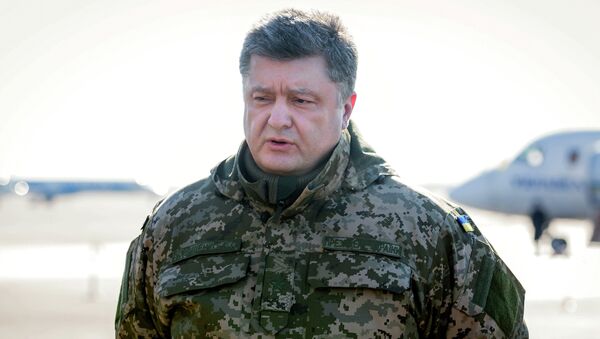 © Sputnik / Mikhail Palinchak
/
Go to the photo bank
Subscribe
The President of Ukraine Petro Poroshenko introduced a bill to the Verkhovna Rada to enlarge the maximum size of the national forces.

The draft was registered on Monday and the corresponding document was published on the website of the Ukrainian Parliament.

Russia Slams Finland for Decision to Supply Laser Rangefinders to Kiev
According to the draft, the Ukrainian military should not employ more than 250 thousand people, including 204 thousand soldiers. However, it was noted that during an emergency the military may be strengthened with conscription.

"The size of the Ukrainian Armed Forces in emergencies shall grow by the number of servicemen recruited for military service consistent with the mobilization decrees of the Ukrainian president," it said.

The funds for an increase in the Ukrainian Armed Forces are provided for by the budget of 2015.

This comes a week after President Petro Poroshenko said that the new Minsk agreements on regulating the crisis in eastern Ukraine give hope, but he is unsure whether they will be fully implemented.

US Plans to Send 300 Military Personnel to Train Ukrainian Soldiers
"We managed to reach agreements that give hope that the events in Donbas will transition from the hot stage to a state of political regulation. I don't want anybody to have illusions and I don't want to seem naive – we are still far from peace…and nobody has a firm belief that the Minsk peace agreements will be strictly implemented," Poroshenko said last week.

The Ukrainian leader expressed hope that the situation will de-escalate, and peace will be achieved through ceasefire and withdrawal of artillery.

In early January, the Minister of Defense of Ukraine Stepan Poltorak said that the state budget for 2015 will provide military funding at the amount of 44.6 billion UAH ($1.6 billion USD).

"It is almost 3.6 times more than the last year," Poltorak said.

A similar bill was introduced the Prime Minister of Ukraine Arseniy Yatsenyuk on behalf of the government in January. According to him, the total financing for national security and defense in 2015 will total 90 billion UAH ($3.2 billion USD).