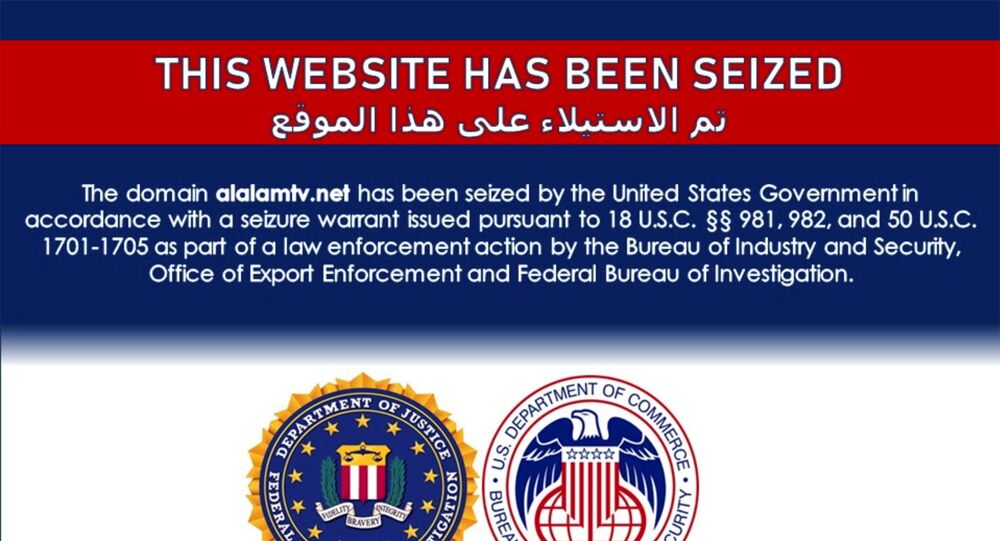 The US Justice Department has seized a range of Iran-affiliated news website domains, accusing the outlets of "spreading disinformation" and violating sanctions. The takedowns came as world powers scramble to revive the 2015 nuclear deal, which Washington unilaterally abandoned under the Donald Trump administration.

Tehran has warned that the US seizure of dozens of Iranian websites is "not constructive" for the ongoing talks on the revival of the Joint Comprehensive Plan of Action (JCPOA), commonly known as the Iran nuclear deal.

"We are using all international and legal means to... condemn... this mistaken policy of the United States. It appears not constructive when talks for a deal on the nuclear issue are under way," the director of the president's office, Mahmoud Vaezi, told reporters.

On Tuesday, American authorities blocked over 30 websites, including PressTV and Al-Alam, for allegedly violating US sanctions.

"Today, pursuant to court orders, the United States seized 33 websites used by the Iranian Islamic Radio and Television Union (IRTVU) and three websites operated by Kata’ib Hizballah (KH), in violation of US sanctions," the US Justice Department said in a statement.

Both PressTV and Al-Alam were back online within hours, using Iranian domain addresses.

The website of PressTV, which is an English-language news service, read:

"The domain presstv.com has been seized by the United States Government in accordance with a seizure warrant issued pursuant to 18 USC §§981, 982 and 50 USC 1701-1705 as part of a law enforcement action by the Bureau of Industry and Security, Office of Export Enforcement and Federal Bureau of Investigation."

Following the takedown, PressTV tweeted out a statement, saying "In what seems to be a coordinated action, a similar message appears on the websites of Iranian and regional television networks that claims the domains of the websites have been 'seized by the United States Government'."

In what seems to be a coordinated action, a similar message appears on the websites of Iranian and regional television networks that claims the domains of the websites have been “seized by the United States Government.” pic.twitter.com/JloU56LvpL

Back in October 2020, US prosecutors seized a network of web domains they claimed were used in a campaign by Iran's Revolutionary Guard Corps (IRGC) to spread "political disinformation" around the world.

The seizures come as world powers attempt to resurrect the 2015 nuclear deal and just days after the victory of Ebrahim Raisi in presidential elections. During his first press conference on Monday, Raisi said that Iran will continue to engage in talks regarding the revival of the nuclear accord, but stressed that the country's diplomacy will not be limited to the deal.

"We do not intend to negotiate a nuclear deal if they do not ensure the interests of our country," the president-elect added.

Raisi went on to slam the 2018 decision by the Donald Trump administration to unilaterally pull out from the nuclear agreement and accused the US of "violating" it by imposing sanctions on Tehran. He pointed out that the sanctions must be lifted, and said he had no plans to meet the incumbent president of the United States, Joe Biden.

The US withdrew from the deal in 2018 and reimposed sanctions on Iran in line with its "maximum pressure policy" against Tehran, and in response the Islamic Republic began to roll back its commitments under the accord. Iran has repeatedly emphasised that its nuclear programme remains peaceful with no intention to produce nuclear weapons.