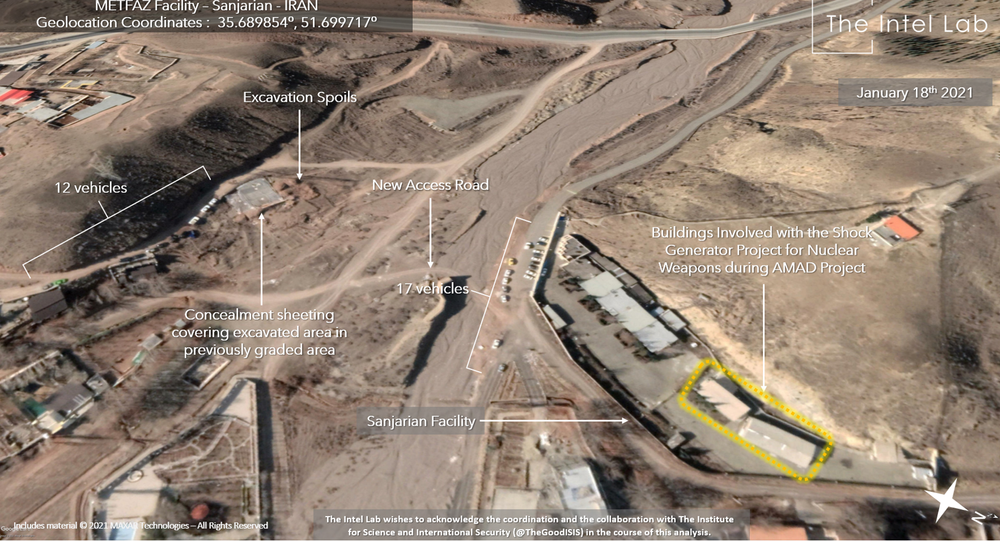 The Biden administration has been negotiating a possible US return to the 2015 Joint Comprehensive Plan of Action, or Iran nuclear agreement. Washington’s Israeli allies have fought tooth and nail to stop this from taking place, citing the Islamic Republic’s alleged plans to build a nuclear bomb. Tehran has denied any ambitions in that direction.

Private Israeli intelligence outfit The Intel Lab has released what it says are satellite pictures of an alleged secret Iranian nuclear site in the village of Sanjarian outside Tehran, suggesting that the images, which show “buildings involved with” Iran’s “nuclear weapons” project and activity around them in recent months, should “raise alarms” for International Atomic Energy Agency officials meeting in Vienna.

Satellite images of #Iran #nuclear site in #Sanjarian raise alarms as @iaeaorg meets in Vienna. Analysis by @TheIntelLab in coordination and collaboration with @TheGoodISIS https://t.co/kgoXMOItZP #FoxNews

The images, snapped by private US satellite imaging firm Maxar Technologies, first published by Fox News, and analysed by The Intel Lab in cooperation with the Institute for Science and International Security (ISIS), a Washington-based think tank, were reportedly taken on 15 October 2020, 18 January 2021 and 29 March 2021, and appear to show construction activities in and around the facility, which is characterised as a “Probable Nuclear Program-Related Concealment Site”.

The Intel Lab and ISIS claim the Sanjarian facility’s role was to produce ‘shockwave generators’ – a component necessary for the miniaturisation of nuclear weapons.

The alleged Sanjarian facility, first reported on by Mossad in 2018 as Israel lobbied the Trump administration to scrap the JCPOA agreement, was reportedly found out about by the Israeli intelligence agency in a raid on a Tehran warehouse to seize the ‘secret Iranian nuclear archive’.

JCPOA’s Fate Up in the Air

While it ostensibly seeks to return to the Iran nuclear deal, the Biden administration has been increasingly critical of Tehran’s nuclear activities and its uranium enrichment capabilities especially, which recently increased to 60 percent purity levels – far above the 3.67 percent purity outlined by the JCPOA, and 30 percent short of uranium which can be classified as weapons-grade.

The IAEA also complained about Iran’s nuclear programme, calculating late last month that the country’s enriched uranium stockpile had exceeded its JCPOA-mandated limit by over 16 times, from 202.8 kg to 3,241 kg, with 2.4 kg of that at 60 percent purity, and 62.8 kg at purity levels of about 20 percent. On Monday, IAEA chief Rafael Grossi urged Iran to clarify the source of uranium particles discovered at undeclared nuclear locations, and suggested that Tehran’s refusal to provide the agency with clarity on the nuclear material ‘seriously affects’ the agency’s ability to certify and guarantee the peaceful nature of the nation’s nuclear programme.

© REUTERS / POOL
Netanyahu Urges US to ‘Not’ Rejoin Iran Nuclear Deal After Latest Talks With Blinken
Tehran has dismissed US and IAEA criticisms, emphasising repeatedly since January that it would be willing to immediately reduce its uranium enrichment and stockpiling levels as soon as Washington agrees to rescind its crushing and illegal sanctions regime against the Islamic Republic.

A sixth round of talks on the nuclear agreement will take place in Vienna Thursday. While it was reported in May that the US was willing to lift ‘most’ sanctions against Iran’s energy and banking sectors, Washington recently waffled on these commitments, with Secretary of State Antony Blinken telling Congress on Tuesday that the US wasn’t certain “at this stage whether Iran is willing and able to do what it would need to do to come back into compliance.” In a possible bid to calm hawks and pro-Israeli lobbyists, Blinken also assured Congress that “hundreds” of US sanctions against Iran would remain in place even after the nuclear deal was restored.

Iran has regularly dismissed claims that it has the goal of building nuclear weapons, citing religious rulings by its successive supreme leaders, known as ‘fatwas’, which prohibit the pursuit of nukes and other weapons of mass destruction on the basis of Islamic principles. Israeli officials led by Prime Minister Benjamin Netanyahu have spent over a decade claiming that Iran is 'on the verge of' building a nuke -being either "months" or "weeks" away from obtaining the necessary materials or technologies to do so. After the passing of each successive deadline, these claims have so far come to naught.

© CC BY-SA 3.0 / טל ענבר / Shavit 3rd stage
Iran Asks Why Israel Gets Preferential Treatment With IAEA Despite Its Arsenal of Nukes
Tehran has encouraged the international community to investigate Israel’s own suspected status as the Middle East’s sole possessor of a nuclear arsenal. Israel neither confirms nor denies having these capabilities in a policy known as ‘deliberate ambiguity’.
...
Reddit
Google+
Blogger
Pinterest
StumbleUpon
Telegram
WhatsApp
440