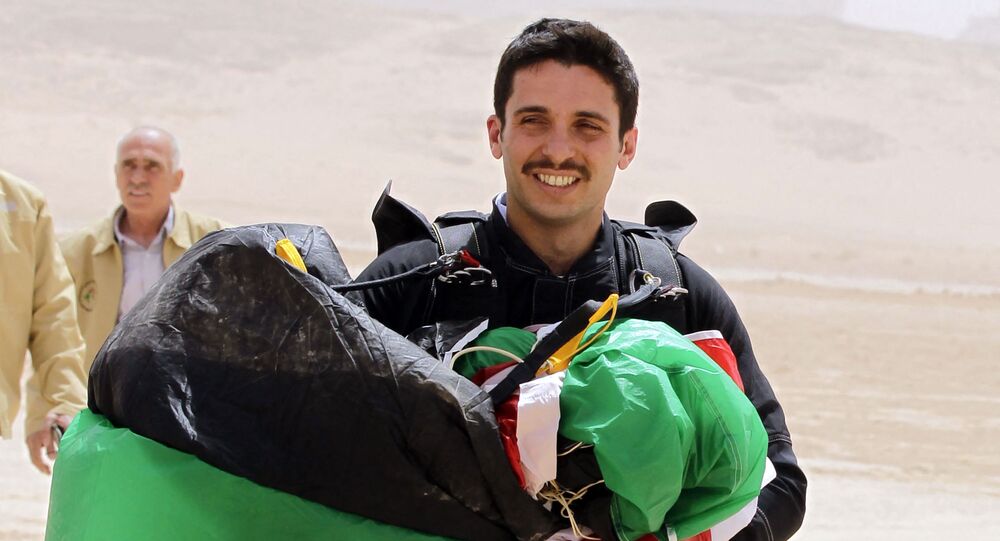 Estranged former Jordanian crown prince Hamzah, who had openly criticised the current government over alleged corruption and a "breakdown of governance", earlier swore loyalty to his half-brother, King Abdullah II, in a letter published by the royal court, and said that he was under house arrest for actions that undermine national stability.

Phone intercepts suggest that aides to the embattled former Jordanian heir Prince Hamzah had sought pledges of allegiance on his behalf from tribal leaders and ex-military officers weeks before he was detained and placed in house arrest amid accusations he'd engaged in a plot to destabilise the kingdom.

“Our guy has made a decision to move, do you pledge allegiance?” a voice in one of the supposedly tapped calls was quoted as saying by The Guardian.

The alleged exchanges took place over three weeks in March, when Jordanian officials claim Hamzah, first in line to the throne until King Abdullah II, his half-brother, removed his title as crown prince in 2004, attempted to rally support for a subversive plot to challenge the monarch’s reign.

A meeting of tribal figures in northern Jordan, tapped by intelligence officials, is said to reveal the men discussing how to galvanise support for 41-year old Hamzah. According to the cited audios, meetings of civilians were to be limited to 15 people, while gatherings of retired military leaders were restricted to seven.

The Arabic term mubayaa, which implies swearing an oath to a monarch, was reportedly heard in the intercepted recordings, claims the outlet, triggering concerns of intelligence officials who had been surveilling Hamzah and his aides.

The cited recordings have become crucial evidence in the case the Jordanian government has built against two men - Bassem Awadallah, a former envoy to Saudi Arabia, and Sharif Hassan bin Zaid, a cousin of the king – who are scheduled to stand trial in Amman in the near future.

The two men are accused of acting as proxies for Hamzah in a failed attempt to undermine his half-brother, King Abdullah, as monarch.

On Wednesday The Guardian reported of US officials having warned the General Intelligence Directorate (GID) in Amman of the alleged seditious conspiracy in a call made in March.

The warning by the US embassy came after Bin Zaid had purportedly approached a US diplomat seeking support for the ascent to the throne of the fourth son of King Hussein of Jordan - the first by his American-born fourth wife, Queen Noor.

In mid-March, after both the royal court and Jordan’s general intelligence directorate had received warnings regarding Hamzah’s alleged plot, officials claim the ex-crown prince sought to manipulate three key events to rally support in his favour.

The first referred to seven deaths in March in a hospital in the town of Salt during an oxygen outage blamed on negligence.

“Hamzah turned up to Salt, and we know he was plotting with his aides to make a show of things,” a senior official was quoted as saying.

The other key element in the timing was the commemoration of the Battle of Karameh - a military engagement between the Israel Defence Forces (IDF) and combined forces of the Palestine Liberation Organisation (PLO) and the Jordanian Armed Forces (JAF) in the Jordanian town of Karameh on 21 March 1968, during the “War of Attrition”.

“At that point Hamzah was asking for advice on how to proceed. He was told: ‘These decisions need well thought-out responses. When it’s time for the full knockout, you will know,” an official is cited as saying, adding:

“His people told those they had recruited: ‘When he acts, it is to be for the jugular.’”

The scandalous royal rift dates back to when former Crown Prince Hamzah bin Hussein - first in line to the throne – was sidelined by his half-brother King Abdullah II by having his title removed in 2004. Abdullah subsequently conferred the title on his son Hussein five years later.

In early April, Jordanian Foreign Minister Ayman Safadi told reporters that the country’s military and intelligence services had discovered that Hamzah and his associates, including Hassan bin Zaid, a member of the royal family and envoy to Saudi Arabia, Bassem Ibrahim Awadallah, a veteran adviser to the royal family, along with a number of others, had been allegedly in contact with unnamed foreign intelligence agencies seeking to unseat King Abdullah II.

Hamzah was placed under house arrest during a security sweep carried out by Jordanian officials ostensibly against forces plotting to destabilise the country and depose the king.

Queen Noor, Hamzah's American-born mother and widow of the late King Hussein, dismissed the allegations made against her son on Sunday, tweeting that she was "praying that truth and justice will prevail for all the innocent victims of this wicked slander."

​In a video released to the BBC in early April, Hamzah said that he was not the one responsible "for the breakdown in governance, for the corruption, and for the incompetence that has been prevalent in our governing structure for the last 15 to 20 years".

He also denied being part of any conspiracy or foreign-backed group.