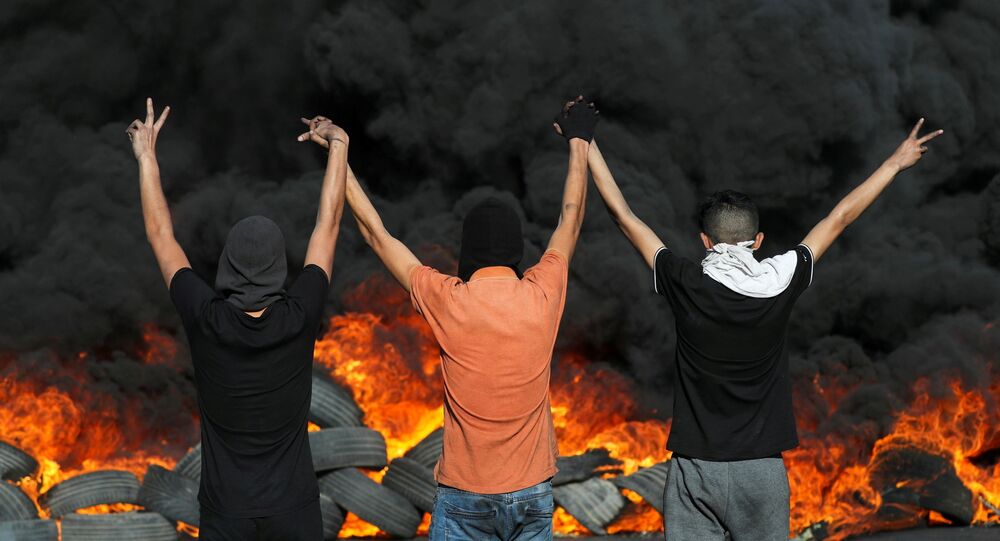 Videos: People Across West Bank Take to Rooftops to Chant in Support of Palestinian Struggle

The action comes amid recent reports of Israeli artillery shelling of the Gaza Strip, with more than 20 shells fired, according to local media reports, and sirens of missile attacks over cities in southern Israel sounding, as the country's Iron Dome air defense system intercepts new rockets.

Palestinians across the West Bank took to their roofs at midnight on Sunday to chant the Muslim Takbir in support of their fellow countrymen in Jerusalem and the Gaza Strip facing down attacks by the Israeli police and military.

According to local media reports, calls went out Sunday evening across social media for Arabs to go out onto their roofs, balconies or the streets to show their support.

Several videos shared by news outlets and on social media show people chanting "Allahu akbar" (God is the greatest) across neighborhoods, and at times even launching fireworks.

​Meanwhile, local media reported on an attack at the Shuafat Palestinian refugee camp in the East Jerusalem area, as well as in other areas of the West Bank.

The media also claimed that Israeli fighter jets were reported flying over Gaza's port of Khan Yunis as artillery strikes against targets in the city continued.

Shortly after midnight, Gaza-based militants launched new rocket barrages into Israeli territory, with rocket sirens reported in the nearby cities of Ashkelon, Beersheva, Netivot, Eshkol and others.

Videos that circulated online showed the operation of the Iron Dome system, allegedly intercepting rockets in the sky above Ashkelon.

Clips from the Beer Sheva rocket attack this evening from #Gaza into #Israel at 0002 local. MLRS launch. pic.twitter.com/nOiP0il5Kd

​On the evening of May 10, tensions between Israel and the Gaza Strip reached new heights. Approximately 3,100 rockets have since been launched into Israeli territory from the Gaza Strip, while Israel has attacked alleged Hamas facilities across the border with rockets and air raids.