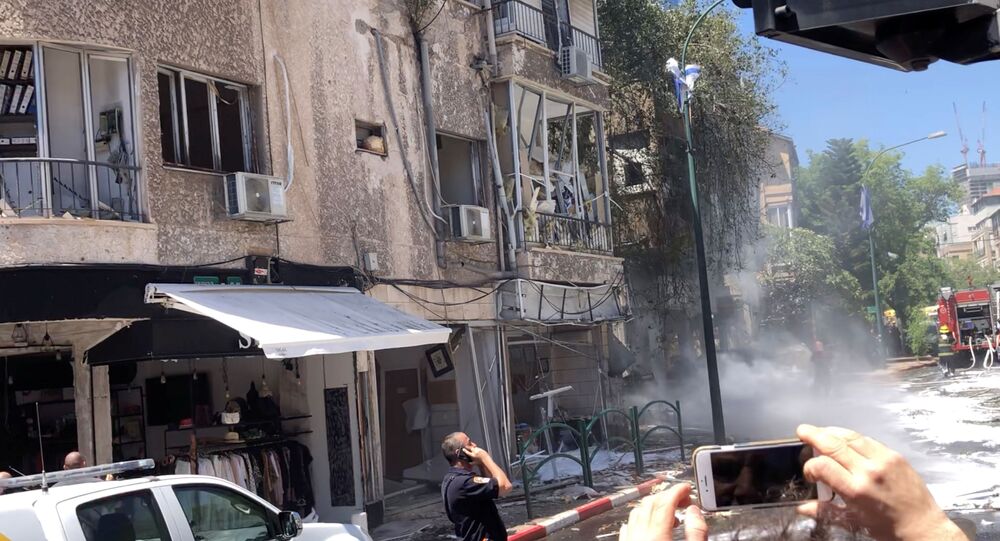 Earlier in the day, Gaza-based Palestinian group Hamas reportedly stated that its current rocket barrages are based on the principle of retribution for any Israeli assault on the besieged Gaza Strip.

Abu Obeida, the representative of the military wing of Hamas, the Al-Qassam Brigades, said that the movement will cease firing on Tel Aviv for two hours - from 22:00 to 24:00 local time on Saturday.

"Qassam Brigades give the residents of Tel Aviv a truce for two hours, from 10 p.m. to midnight," the military wing's representative, Abu Obeida, said in a statement.

According to the statement, the ceasefire will affect only Tel Aviv, the second-largest city in Israel, located 65 kilometers from the capital.

The statement of the representative of the armed wing of Hamas has been circulated in the media.

Prior to that, the Israel Defense Forces released several videos on Twitter of airstrikes conducted against military targets in Gaza, including a strike on the house of the head of the movement's special operations headquarters.

Earlier in the day, US President Joe Biden in a conversation with his Palestinian counterpart Mahmoud Abbas "stressed the need for Hamas to cease firing rockets into Israel," according to a White House statement.

Moreover, the president "underscored his strong commitment to a negotiated two-state solution as the best path to reach a just and lasting resolution of the Israeli-Palestinian conflict."

Since the beginning of the missile exchanges on Monday evening, Palestinian armed groups have attacked almost all of Israel's territory. Rocket sirens over Tel Aviv have sometimes sounded several times in an hour, Israel's Iron Dome air defense system has repelled most of the rocket launches from Gaza, but some have still fallen in populated areas of the Jewish state's settlements.

On the night of May 7, large-scale clashes between Palestinians and Israeli police broke out in East Jerusalem. Riots began in two areas at once: near the Temple Mount and in the Sheikh Jarrah quarter, where the eviction of Arab families is being carried out by an Israeli court, which is why protests continued for several days, rapidly escalating into riots.

The situation on the border between Israel and the Palestinian Gaza Strip escalated on the evening of May 10. As of Saturday evening, since the beginning of the fighting, more than 2,300 rockets have been fired from Gaza into Israeli territory, and approximately 400 of them have fallen inside the enclave. According to the latest data, eight civilians and one soldier were killed in Israel. Israel has also carried out hundreds of attacks on the Palestinian Authority. The number of Palestinians killed in Israeli airstrikes has reached 145, including 41 children.