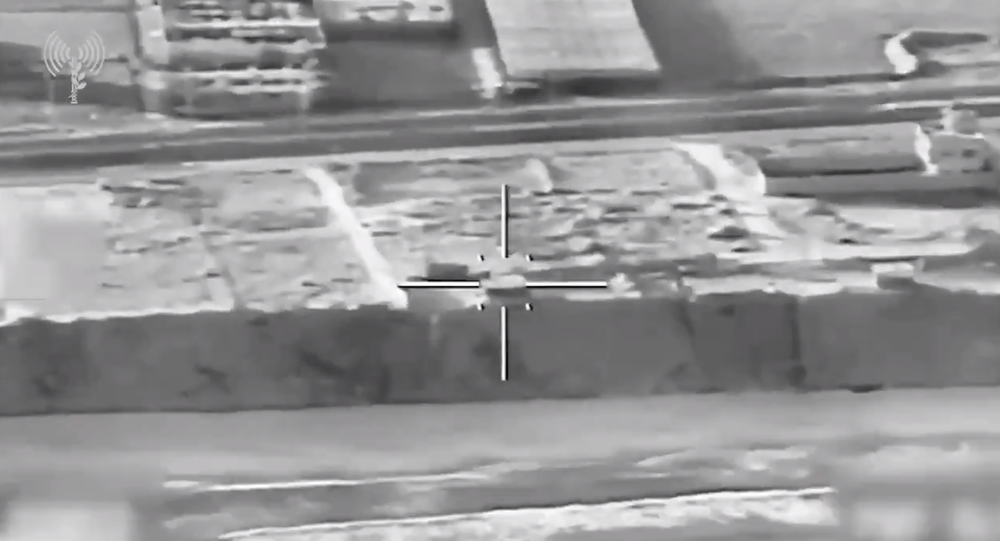 The attacks come amid the ongoing clashes between the Israel Defence Force (IDF) and Gaza militants, with the former waging a major air campaign against the latter as they launch hundreds of makeshift rockets toward Israel. At least 122 civilians and 20 militants in Gaza, and several Jewish civilians in Israel, have been killed in the violence.

The Israeli military has been hitting Hamas naval forces in Gaza, the press service of the IDF has announced.

"Over the past few days, IDF aircraft have struck dozens of targets belonging to the Hamas naval force, including vessels, weapons warehouses, observation posts and military compounds," the press service said in a tweet on Friday.

The video shows missile cam footage of projectiles flying toward buildings on the coast of the Mediterranean Sea. Sputnik could not independently confirm that the facilities hit were military-related.

The Gaza Strip has been under a naval blockade by Israel since 2007, when Hamas took over the territory and established self-rule. Tel Aviv has accused the militants of using the coast for smuggling weapons, but has itself been charged with attacking or seizing vessels containing humanitarian cargoes.

© REUTERS / MOHAMMED SALEM
Gaza Strip as Israeli-Palestinian Tensions Escalate
Hamas is not known to have a navy proper but does have an elite frogmen commando force, small boats and coastal facilities, rockets, and anti-tank missiles used for potential attacks on Israeli ships.

Earlier this year, Israeli media estimated that Hamas's naval wing has as many as 400 commandos who have "received sophisticated training and equipment." Israel found out about the commandos' existence during the 2014 Gaza War, with the elite unit reportedly attempting to infiltrate Israel by sea, but stopped from doing so by Israeli vessels. The IDF did not report on any damage done by the militants in the 2014 war.

Weeks of raging tensions between Palestinians and Jews in Jerusalem escalated into mass unrest across Israel, and a military conflict between Tel Aviv and militants in the isolated Gaza Strip this week. Tensions began to build throughout last month after Israeli authorities in Jerusalem closed access to the Al-Aqsa Mosque – one of the holiest sites of Islam, for Ramadan celebrations. The situation escalated over an expected Israeli Supreme Court ruling to allow Jewish Israelis to take over the homes of evicted Arab families in East Jerusalem last week before degenerating into widespread clashes between Arab Israelis and Israeli security forces starting Monday.

Hamas launched rockets into Israel on Tuesday in response to the police storming of the Jerusalem mosque compound, which injured over 300 demonstrators. The IDF responded with strikes against hundreds of targets in Gaza.

As of Friday, at least 122 Gazans, including 31 children, have been killed, with over 900 more wounded. Nine Palestinian protesters in the West Bank, and one in East Jerusalem, were also killed, as were seven civilians (two of them Arab-Israelis and one Indian national) and an Israeli soldier in Israel itself. Over 200 Israeli civilians and 21 security forces personnel were also injured in the clashes and rocket attacks.