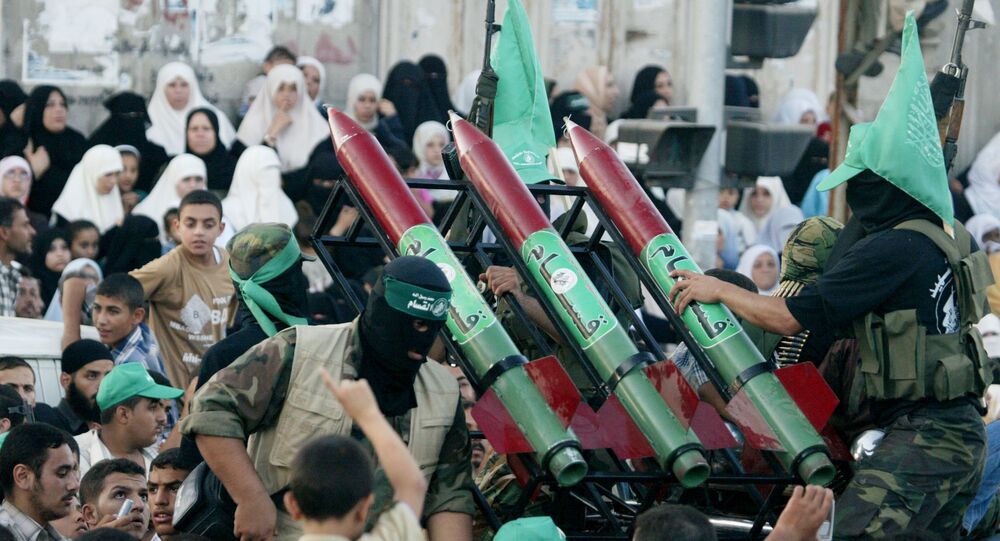 The Israeli military has long touted its cutting-edge air defences, with the Iron Dome, Arrow 3, Barak 8, and David’s Sling designed to protect the country from threats ranging from small rockets to long-range ballistic and cruise missiles. However, the ongoing firefight with Hamas in Gaza has shown that no air defence system is perfect.

“Several days have passed since the start of a new round of clashes between the Zionist army and Palestinian resistance groups, and in the spotlight more than anything is the power of resistance groups’ rockets, their ability to fire large volumes of these rockets into the depths of the occupied territories, and Israeli air defence systems’ battle with them,” Taheri wrote in a piece for Tasnim.

The observer believes the Israeli military first discovered the growing missile power of its adversaries during the 2006 Lebanon War, when Hezbollah militants fired thousands of rockets into Israel, bombarding cities, towns, and villages in retaliation to a similar Israeli Air Force campaign against its northern neighbour.

The Iron Dome was set up in 2011, becoming a central component of Israel’s multilayered air and missile defence system, with an aerospace defence system divided by region replaced with an integrated system covering the whole of the country.

The Iron Dome itself is perhaps tasked with the most important role among Israel’s air defence systems when it comes to battling non-state entities such as Hamas and Hezbollah, given its responsibility for dealing with unsophisticated, low-speed, low-altitude rockets like those launched by non-state actors.

More advanced systems such as the Arrow 3 are meant to counter threats including ballistic and cruise missiles. However, Taheri suggests that while the Iron Dome has seen plenty of real-life “testing,” “the other air defence systems of the regime’s military, except in a few cases, have not yet entered into a serious conflict, and therefore their performance is disputed.”

© AFP 2021 / MAHMUD HAMS
A rocket launched from Gaza city controlled by the Palestinian Hamas movement, is intercepted by Israel's Iron Dome aerial defence system, on May 11, 2021.

Each Iron Dome system is equipped with radar and command and control modules and three launchers, the latter armed with 20 Tamir interceptor missiles apiece. Israel has a total of 12 Iron Dome systems in its arsenal.

The Iron Dome has several weaknesses, according to Taheri. “First, the number of available systems is not enough to cover” the whole of Israel, “and therefore, in the event of a multi-front war, the system will not be able to respond to all rocket and missile attacks, and Israel’s low-altitude air defences will be extremely vulnerable.”

Second, he notes, the system is not able to intercept missiles or rockets fired from less than 4 km away, meaning that the placement of enemy launchers at distances closer than this poses a “serious threat to the system.” Additionally, the Iron Dome cannot track targets flying at high speeds and with a flight time of less than 28 seconds.

“Furthermore, the warheads of the missiles used in this system are equipped with a proximity fuse, with the optimal distance for destroying the target being one meter; otherwise the possibility of its fragments penetrating the target and destroying it are reduced.”

An inability to deal with high volumes of fire simultaneously, and resistance groups’ recognition of this fact, is another major problem, he believes.

Additionally, the high price of the Iron Dome’s interceptor missiles versus the low cost of the rockets used by groups like Hamas and Hezbollah makes shoot downs a costly effort, notwithstanding multi-billion dollar US subsidies to the Israeli military. “According to openly available information, each Iron Dome missile costs between $40,000 and $100,000, whereas the price of each rocket fired by the Palestinian groups is between $1,000 and $5,000,” Taheri writes.

Finally, the observer suggests that the improved speed, accuracy, range, and potency of rockets now used by the militants are another problem for Israeli air defence systems.

© AFP 2021 / ANAS BABA
Watch Israelis Flee Beach as Missile Sirens Set Off in Tel Aviv
“The increased power of resistance rockets has caused the scope of the war, once limited to the borders of the Gaza Strip, to extend to the depths of the occupied territory. In addition to endangering the security of the regime’s sensitive areas and facilities, they have disrupted the daily lives of [Israelis] and increased dissatisfaction with the government and the army,” he indicates.

The observer stresses that the gradual improvement of Hamas’s missiles, and the careful study of the strengths and weaknesses of Israeli air defences as a whole and the Iron Dome in particular, have enabled the militants to establish a previously unseen level of power vis-à-vis Israel. “If this continues, it will lead resistance groups to acquire more advanced weapons than those they have today, and to inflict even heavier blows against the Zionist regime,” he warns.

Israeli defence giant Rafael boasts that its Iron Dome has an interception rate of 90 percent, and says that over 2,500 Hamas and Hezbollah missiles had been intercepted successfully between 2011 and January of 2021.

However, the Israeli military has a slightly lower estimation of the system’s accuracy, saying it varies from 85-90 percent. Furthermore, even before the recent flare-up of fighting, Israeli intelligence and national security officials reportedly warned the government of militants’ ability to launch as many as 1,000 rockets into Israel in one day, an eventuality which would pierce the Iron Dome shield.

On Friday, The Jerusalem Post intelligence and terrorism editor Yonah Jeremy Bob wrote that even Hamas, which is considerably weaker than Hezbollah or any state actor Israel may encounter, may have found a way to partially undermine the Iron Dome by firing massed volleys of rockets simultaneously, overwhelming the air defence system.

“Does this mean the Iron Dome is no longer effective? No. It still intercepts the majority of rockets fired at Israeli population centers, although some are getting through. The bigger question is whether Israeli intelligence estimates are correct that Hamas has only a few hundred missiles which can reach Tel Aviv,” the observer stressed.

“If those estimates are accurate, then Hamas may have used up a large chunk of that arsenal” in this week’s strikes, “even if it has thousands more [rockets] which can hit Beersheba, Ashdod and other communities near the Gaza border. But if Hamas has more of those longer-range rockets, this could impact Israel’s plans for this round of violence and especially the question of how long it wants it to last,” Bob wrote.

© AFP 2021 / MOHAMMED ABED
Live Updates: Netanyahu Tells Biden Israel 'Doing Everything' to Avoid Civilian Casualties in Gaza
Israel, the Palestinian territories, and Gaza have faced their deadliest week in recent memory amid Palestinian rage over access to holy sites and other long-standing issues, including Israeli court-ordered evictions of Palestinian families in East Jerusalem. Nearly a month of protests escalated into violence on Monday after Israeli police stormed the Al-Aqsa compound in Jerusalem, prompting interethnic strife, arson attacks, shootings, and fighting between police and Arab-Israeli protesters throughout the country.

Hamas began firing hundreds of rockets from the besieged Gaza enclave after its deadline for Israeli police to withdraw from Al-Aqsa ran out. Israel responded with missile strikes in Gaza, and has threatened a ground invasion. The violence has killed over 120 civilians and at least 20 militants in Gaza. Seven Israeli civilians and one soldier were killed in Israel, with 16 Palestinians in East Jerusalem and the West Bank also dying in the clashes.