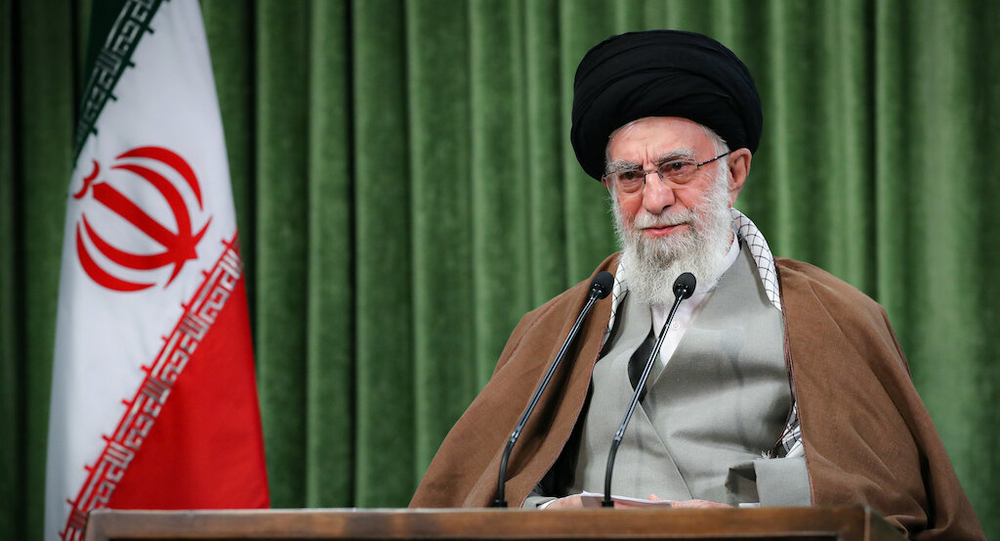 Iran and the Biden administration have engaged one another in a high-stakes blinking contest for over two months now, with neither side budging on its demands that the other become the first to take steps to return to compliance with the Joint Comprehensive Plan of Action (JCPOA) nuclear deal.

Iran is in "no hurry" to return to its obligations under the JCPOA, and is prepared to wait until the US lifts its illegal sanctions against the country in practice, Supreme Leader Ali Khamenei has announced.

In remarks Sunday, given on Iranian New Year, Khamenei stressed that Iran was in no rush to return to an agreement where it abides all of its commitments while other signatories do not. He added that if the nuclear deal is revised, as has been demanded by some circles in the US and Europe, this would only be acceptable if it served Iran's interests, not those of the United States.

"The previous fool [US president] had designed the 'maximum pressure' policy in order to corner Iran and take Iran to the negotiating table and impose his arrogant demands on a weak Iran. However, he disappeared in such a way that both himself and his country were disgraced while the Islamic Iran is standing fast and proud," Khamenei said, referring to Donald Trump.

He warned that if the current administration also wants to pursue a policy of maximum pressure, it too will "fail and disappear" from the political scene.

"Americans must lift all sanctions first and then we will verify this, and if they are truly lifted, we will return to our JCPOA commitments without any problems. We cannot trust the Americans' promises," Khamenei stressed. "We are in no hurry. Yes, we also believe that opportunities must be taken advantage of, but we will show no hurry, because in some cases its risks outweigh the benefits. We acted hastily [in joining] the JCPOA."

Khamenei went on to praise the Iranian nation for withstanding the blow of US sanctions, which he characterised as a "crime," as the restrictions prevented the import of medicines, supplies, and food during a pandemic. "Although the US economic sanctions were a crime against the Iranian nation, they caused Iran to reduce dependence on other countries...Sanctions turned into a lesson for us as they prompted us to find a way to thwart the impact of economic bans," he said.

The supreme leader also encouraged other officials not to link efforts to deal with Iran's economic problems to the lifting of restrictions, saying this would leave Iran dependent "awaiting decisions to be made by others." Instead, he said, Tehran should "suppose that sanctions will remain in place, and plan the country's economy on the basis that sanctions will remain."

Khamenei spent much of the speech discussing economic issues and Iran's response to the coronavirus pandemic, saying that last years directive aimed at increasing import substitution was a general success but that more work was needed to improve access to credit, fight corruption and boost the public's purchasing power and cut out speculators.

He also touched on Iran's upcoming presidential elections, scheduled for 18 June, warning that US and Israeli intelligence services have been plotting to undermine the vote. He stressed that elections were crucial to revamping the executive, "boost[ing] the country's power" and symbolising the Iranian people's presence in politics.

Saturday marked the two-month anniversary of Biden's presidency, but his campaign promises of speedily returning the United States to the Iran nuclear deal appear to be no closer to reality now than when he came into office on 20 January. Washington says it won't rejoin the JCPOA until Iran drastically cuts down its uranium enrichment activities, from 20 percent now to the 3.67 limit outlined in the nuclear deal. Tehran says 'no deal' until the US removes all of its crushing banking and energy sanctions, which have dramatically cut down Iran's energy exports (the lifeblood of its export earnings) and led to a general drop in trade due to some countries' fears of US retaliation.

© AP Photo
Israel Lobby Group Calling on Supporters to Urge US Senators to Ditch Original Iran Deal
In recent weeks, Iranian officials have speculated about whether Israeli lobbying has helped to cool Washington's desire to return to the JCPOA, and urged the US and its European allies to treat Iran and Israel, which is suspected to already be a nuclear weapons state, equally when discussing their "concerns" about the Islamic Republic's nuclear programme.

Iran maintains that its nuclear activities are strictly peaceful, and that it has no intention of pursuing nuclear weapons. Nuclear weapons policy is guided by a fatwa (religious ruling) issued by Khamenei which prohibits the pursuit of nukes. A similar fatwa was issued by his predecessor, Ayatollah Ruhollah Khomenei, in the 1980s, banning the pursuit of any and all weapons of mass destruction. The fatwa prompted Iran to dismantle its stocks of chemical weapons in the 1990s, and the country did not use them during the Iran Iraq War of 1980-1988, despite repeated Iraqi attacks on Iranian troops and civilians.

Tehran gradually began withdrawing from its commitments under the JCPOA in 2019, one year after the Trump administration pulled the US out of the agreement. Iran gave the deal's remaining signatories a one year window to find a mechanism to evade US sanctions, and when they failed to do so, began ramping up its uranium enrichment and stockpiling activities.