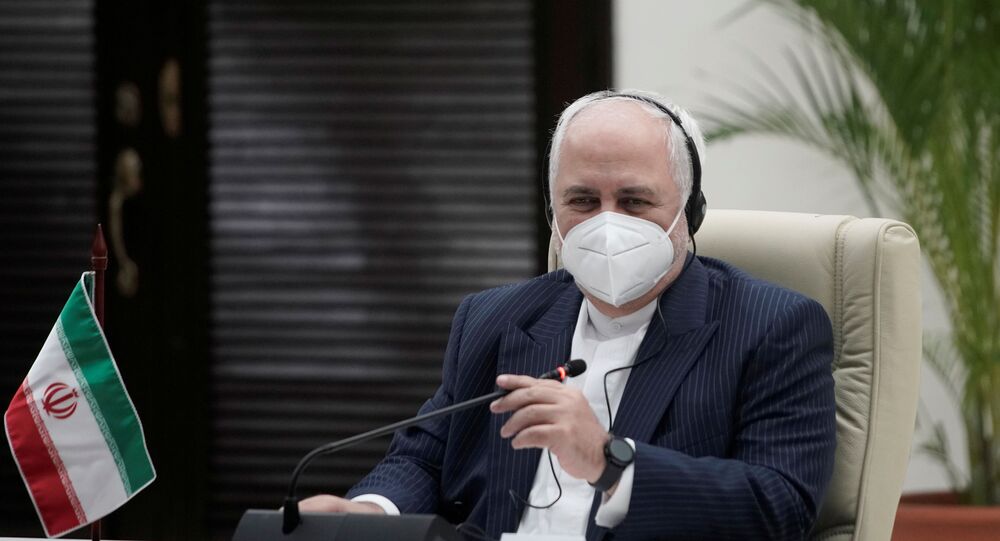 On Sunday, the US Air Force conducted this year's second B-52 "presence patrol" over the Middle East, which came amidst rising military tensions between Iran and the US, which in cooperation with Israel has engaged in frequent air and naval patrols and reconnaissance in the region, prompting Iran to promise a powerful response to any escalation.

Spokesman of the Iranian Majlis' National Security and Foreign Policy Committee Abolfazl Amouei said that the Islamic republic's foreign minister Javad Zarif stated during a meeting with the members of parliament that the country will apply an "action against action" policy against the new US administration of President-elect Joe Biden, MEHR news agency reported Monday.

"According to FM Zarif, our policy toward the Biden administration would be 'action against action'", Amouei said.

The Iranian lawmaker added that today's meeting of the National Security and Foreign Policy Committee of the parliament was attended by Foreign Minister Mohammad Javad Zarif, and 12 questions were asked by the minister's parliamentarians.

The spokesman added that at this conference, Zarif provided to the representatives of the National Security Commission a report on the latest developments in US domestic policy and forecasts on the future of US foreign policy.

"Zarif stressed that our country's policy in the face of the Biden government is 'action against action' and Iran will not accept action against statement or signature", Amouei stated.

Earlier in the day, Iranian Armed Forces Chief of Staff, Major General Mohammad Hossein Baqeri, reacted to the recent actions of the US in the region, saying that it is of no operational benefit to fly two American B-52 bombers over West Asian regions, and Iran is prepared to respond to any threats.

Chief of Staff of #Iranian Armed Forces Major General Mohammad Hossein Baqeri reacted to recent moves by US in the region saying that flying two American B-52 bombers over West Asian regions is of no operational value, adding Iran is prepared to respond to any threats pic.twitter.com/NnOp1eASF0

Commenting on January 17 US bombers flight, Zarif added that even though Iran "has not started a war in over 200 years", the nation will fight back against any aggressor.

Earlier the US sent a nuclear submarine to the Persian Gulf as a show of force, while Iran is currently holding its annual wargames, where the country's military presented new missiles that are reportedly able to accurately hit targets within a radius of more than 1,000 miles.

The outgoing administration of US President Donald Trump has issued a new round of sanctions against Iran and foreign companies doing business with the country. It has sparked a new surge of ongoing high tensions between the two countries, which are expected to continue with the incoming Biden administration.

Military tensions greatly intensified in early 2020, as the US carried out a drone strike targeting Qasem Soleimani, a popular Iranian major general in the Islamic Revolutionary Guard Corps, which resulted in his death. In retaliation, Iran launched several airstrikes toward US military objects in Iraq, while the Islamic republic's officials claimed further "revenge" attacks would occur throughout the year, and the Revolutionary Guard also cautioned that "someone inside" America could "react" to the killing of Soleimani.