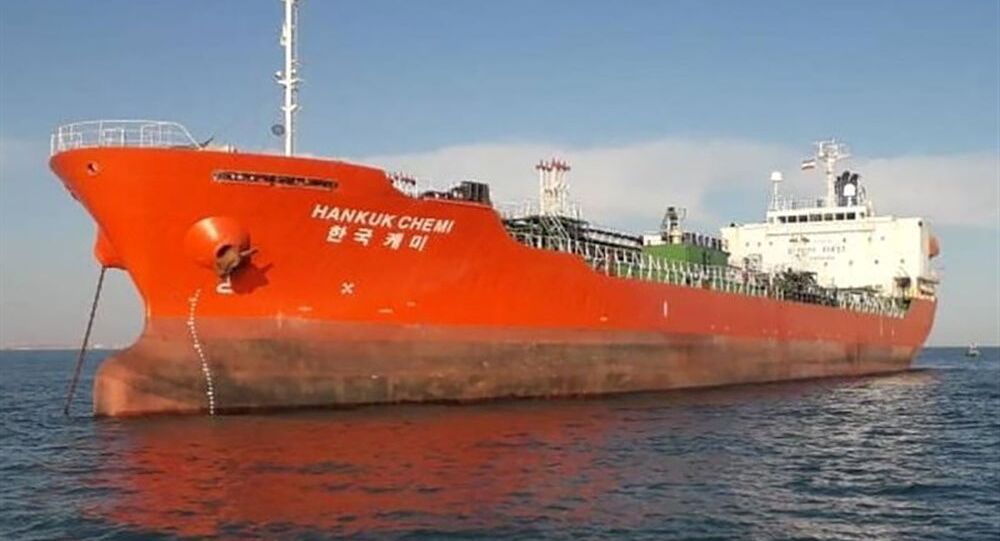 Tehran said it seized a South Korean tanker on 4 January because it was purportedly polluting its waters. The incident strained relations between Seoul and Tehran, which had already been complicated by South Korea's refusal to release $7 billion in oil payments to Iran due to American sanctions.

South Korean tanker the MT Hankuk Chemi was boarded by armed members of the Islamic Revolutionary Guard Corps (IRGC) under the pretext of an unspecified inspection, an anonymous official from DM Shipping, which owns the vessel, told the AP.

According to the source, the tanker was sailing from Jubail, Saudi Arabia, to Fujairah, the UAE, when Iranian forces requested to board the ship. The ship's captain reportedly alerted the company's security while IRGC troops were purportedly storming the ship. An Iranian helicopter was allegedly circling around the vessel during the process.

Upon taking control of the ship, the Iranian troops reportedly demanded that the captain change course and sail into Iranian waters for further inspection, while refusing to elaborate on what the reason was, the AP's source said. The company was reportedly not able to reach the captain or anyone from the crew after that point, while the on-board security cameras stopped broadcasting.

Tehran has confirmed seizing the tanker, saying the vessel had been contaminating nearby waters. Seoul, in turn, has dispatched its anti-piracy unit to the region in response to the incident. Yonhap News Agency has reported, citing a source, that the South Korean Foreign Ministry is currently working to resolve the incident via diplomatic means.

© AFP 2020 / YONHAP
A CCTV footage of the Hankuk Chemi, a South Korean-flagged oil tanker, is displayed on a screen as a boat of Iran's Revolutionary Guards is seen in red circle on the screen at the tanker's owner company DM Shipping, in Busan on January 4, 2021. - South Korea's foreign ministry on January 4 demanded the "early release" of an oil tanker seized by Iran in Gulf waters for breaking maritime environmental laws. (Photo by - / YONHAP / AFP) / - South Korea OUT / REPUBLIC OF KOREA OUT NO ARCHIVES RESTRICTED TO SUBSCRIPTION USE

Iranian government spokesman Ali Rabiei has rejected US allegations that Tehran is holding the MT Hankuk Chemi hostage. Rabiei stated that unlike Seoul, Tehran does not engage in hostage-taking, while referring to South Korean authorities' refusal to release $7 billion in frozen payments to Iran for purchased oil.

The matter has long dogged bilateral relations. Iran has argued that the freezing of the payment limited the government's ability to respond to the emerging coronavirus pandemic in April, among other things. Seoul still refuses to release the funds, which were frozen due to the US economic sanctions imposed against the Iranian energy sector in 2018.