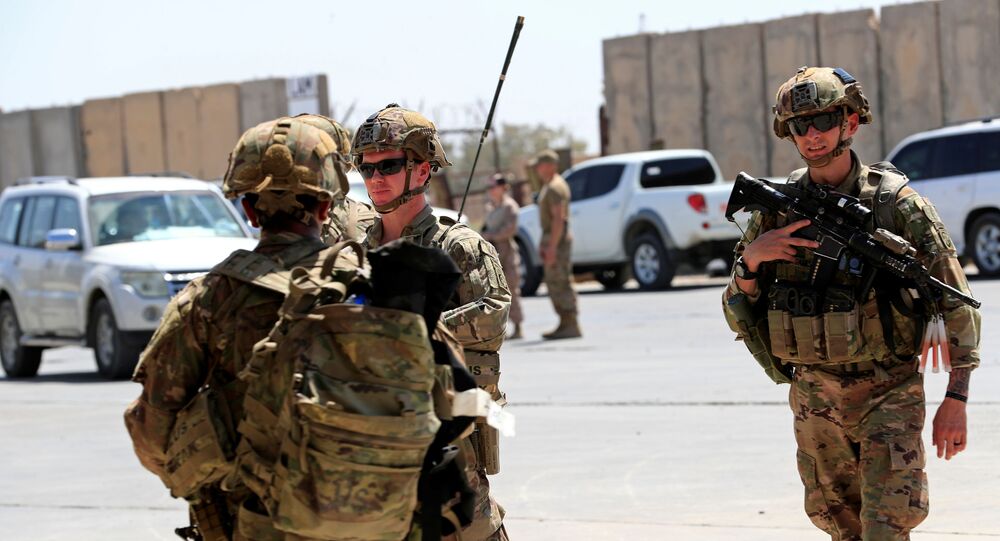 US President Donald Trump and Iraq’s Prime Minister Mustafa Al-Kadhimi reportedly discussed troop reduction during the latter's visit to Washington last week, but made no official announcements indicating that an agreement on the issue had been reached.

The Pentagon will be reducing its military personnel deployed in Iraq by nearly 1/3 in the coming months, down to around 3,500 servicemen, The Wall Street Journal reported, citing anonymous officials. The process will reportedly take between two and three months.

Neither the Pentagon nor the Iraqi authorities have commented on the report which claimed that the number of American troops in Iraq will return to the level prior to the international campaign against Daesh – a terrorist organisation banned in Russia.

© AFP 2020 / ALI AL-SAADI
Iraqi army military vehicles march under the victory Arch landmark during a parade to mark the 91st Army Day in Baghdad on January 6, 2012, weeks after US troops completed their pullout

Officials from both countries, cited by the newspaper, claim that a total withdrawal of the US forces has been ruled out due to the still-fresh memory of Daesh abusing the "security vacuum" that was created after the 2011 pull-out. Some anonymous officials told the WSJ that the withdrawal is linked to the upcoming November presidential election in the US. According to the newspaper's sources, Trump is "anxious" to pull troops out from Iraq in order to make a point about him fulfilling his 2016 electoral pledge to bring American soldiers home.

Despite reports that the talks in Washington between US President Donald Trump and Iraq’s Prime Minister Mustafa Al-Kadhimi addressed the issue of American troops deployed in the Middle Eastern country, the two leaders never announced any progress towards reaching an agreement on a withdrawal, something which has been demanded by the Iraqi parliament since January 2020. At the same time, their joint communique hinted at a possible reduction in the number of US military personnel linked to a shift from fighting Daesh remnants to focusing more on training Iraq's own security forces.

Currently, around 5,200 American troops are deployed in Iraq, but their numbers have been gradually decreasing over the course of 2020. This development began after Iraq’s parliament passed a non-binding resolution demanding that all foreign troops deployed in the country leave in the wake of the US carrying out an airstrike on Iraqi soil without the government's authorisation, killing a visiting Iranian top general, Qasem Soleimani, as a result.

Washington has repeatedly dismissed suggestions that it will be reducing its troop presence in Iraq to ease tensions with Baghdad following the airstrike, but has nonetheless left several Iraqi military bases. At the same time, the US has recently been indicating its willingness to shift the focus of its military power in order to oppose China, which has been designated as possible near-peer adversary under the Trump administration. This change of focus is one of the reasons for the recent reduction in the number of US troops deployed in Germany.