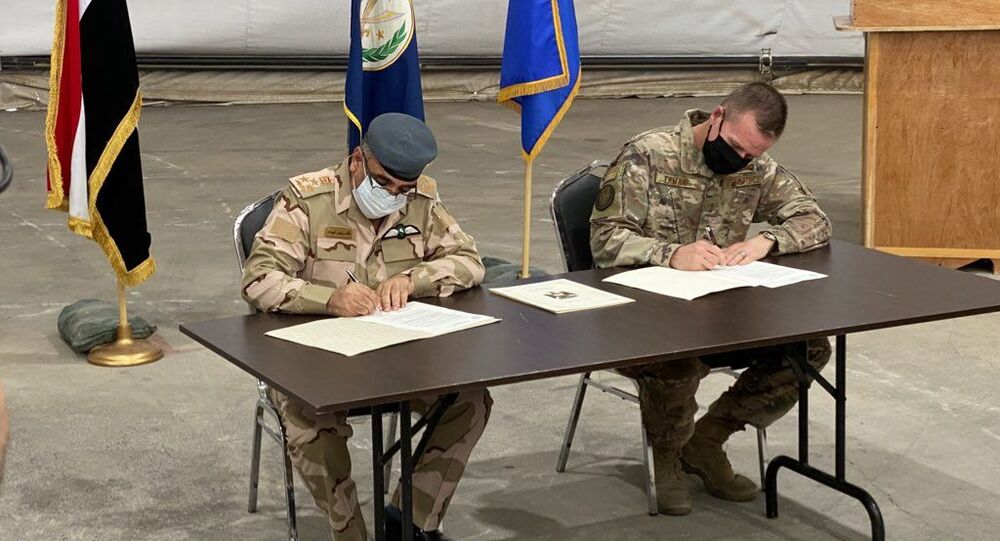 Iraq's parliament ordered US forces to withdraw from the country in January, following the drone strike assassination of a senior Iranian commander in Baghdad. On Thursday, in a meeting with Iraqi Prime Minister Mustafa al-Kadhimi, US President Donald Trump promised that US forces would be leaving the country "shortly."

US forces in Iraq have formally handed the Coalition-occupied area of Camp Taji, central Iraq back to Iraqi security forces, with the handover ceremony signed Sunday, the Coalition has said in a statement.

Describing the withdrawal from the facility as a move which allows the anti-Daesh* Coalition to "shift its focus and role," the Coalition said that "the movement of...military personnel is part of a long-range plan coordinated with the Government of Iraq."

🔴At Camp Taji, @CJTFOIR leaders transferred $347 million of property & equipment to Iraqi Security Forces. Due to @modmiliq success against ISIS, this site handover was long-planned and fully coordinated w/ the @IraqiGovt. 🇮🇶 pic.twitter.com/KncEpbE0Un

"This is truly a historic day," Combined Joint Task Force-Operation Inherent Resolve deputy commander Maj. Gen. Kenneth Ekman said of the move. "For the past six years, Camp Taji has served as a primary installation for Coalition partners to train the Iraqi Army, Iraqi Air Force, and the Qwat al-Khasah. The Coalition's efforts have enabled the Iraqis to train themselves. From this day forward, [the Iraqi Security Forces] will take full responsibilities for the facilities and programs at Taji and continue to use the site to lead and conduct training as part of the mission to defeat Daesh remnants."

The withdrawal includes the exit of 300 US troops and contractors, and the handover of $347 million in structures and equipment to the Iraqi side, including over 90 million rounds of ammunition.

Sunday's ceremony follows a string of rocket attacks against the Taji base in recent months, with projectiles repeatedly fired into the facility by Baghdad government-allied Shia militia forces in the wake of the January 3, 2020 assassination of Iranian Quds Force Commander Qasem Soleimani at Baghdad's international airport.

This week, several militias within Iraq's Popular Mobilization Units (PMU) threatened to attack US positions throughout Iraq should Baghdad fail to negotiate a withdrawal of the foreign forces. "If an agreement on the expulsion of US forces from Iraq is not concluded in Washington, we reserve the right to target America's interests in Iraq," the militias warned.

Roughly 47,000 Iraqi Security Forces personnel have been trained at the Taji base, with the facility situated about 30 km outside Baghdad. At one point, the base contained as many as 2,000 Coalition troops. The Camp Taji facility is the eighth Coalition base to be handed back to the Iraqi side in recent months.

On Thursday, in a meeting with the Iraqi Prime Minister, President Trump reiterated to reporters that the US would be leaving Iraq "shortly."

"We have been taking our troops out of Iraq fairly rapidly, and we look forward to the day when we don't have to be there," Trump said, without giving an exact timetable on withdrawal.

An estimated 5,200 US troops remain in Iraq. The US invaded Iraq 2003 and briefly left in 2011 before returning in 2014 to help Baghdad fight Daesh. Tensions between Coalition forces and the PMU escalated dramatically after the assassination of Soleimani, who was responsible for coordinating Iranian assistance to the militias for their fight against the terrorists. Soon after the Iranian commander's death, the Iraqi parliament ordered US forces to withdraw from the country.