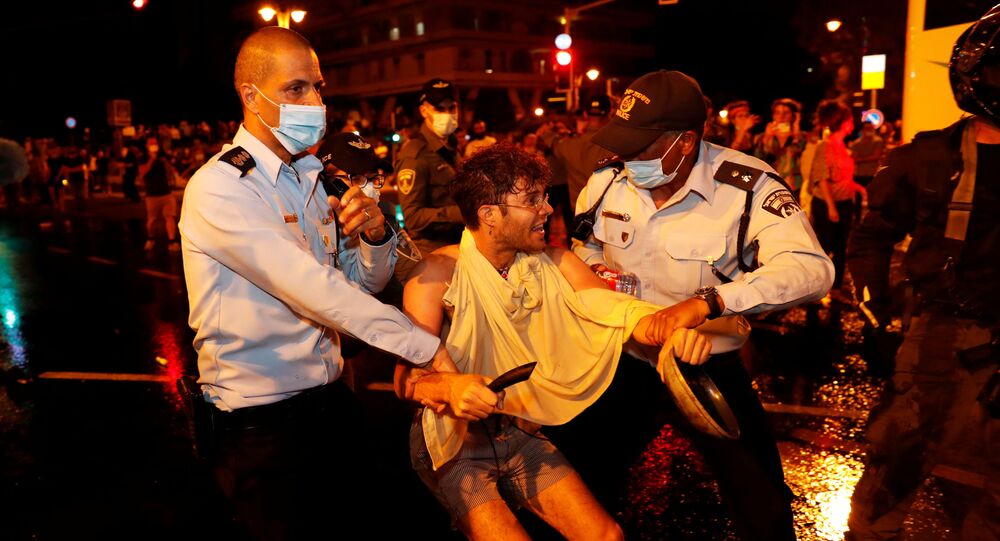 TEL AVIV (Sputnik) - Clashes between Israeli police and protesters angry at Prime Minister Benjamin Netanyahu for his continued hold on power broke out Tuesday outside his residence in Jerusalem, media said.

Thousands gathered on Balfour Street to demand the veteran politician's resignation, according to the Jerusalem Post newspaper. Some protesters reportedly carried torches.

A spokesperson for the Jerusalem police could not confirm reports of violence. The police said that several roads near the protest site had been blocked and drivers were urged to consider alternative routes.

BREAKING - Reports of clashes outside of Israel's PM Netanyahu's residence in Jerusalem; Protesters are demanding his resignation - via @Faytuks pic.twitter.com/nNtflGEgKX

Police used water cannons and officers on horseback dispersed demonstrators, according to The Times of Israel. The clashes reportedly started when some protesters tried to break through security barriers installed at the scene.

According to the newspaper, police said that at least one officer had been lightly injured during the clashes, while around 50 protesters were arrested.

“We will allow freedom of speech and protest, but will not allow harm to citizens, police, media and public property,” police said, cited by the outlet.

The paper said that several demonstrations have taken place at the same time across Israel.

Another rally against Netanyahu's economic policies and coronavirus response was held in Tel Aviv on Saturday. The minister is expected to stay in power until September 2021 under a rotation scheme he agreed to in May with political rival Benny Gantz.