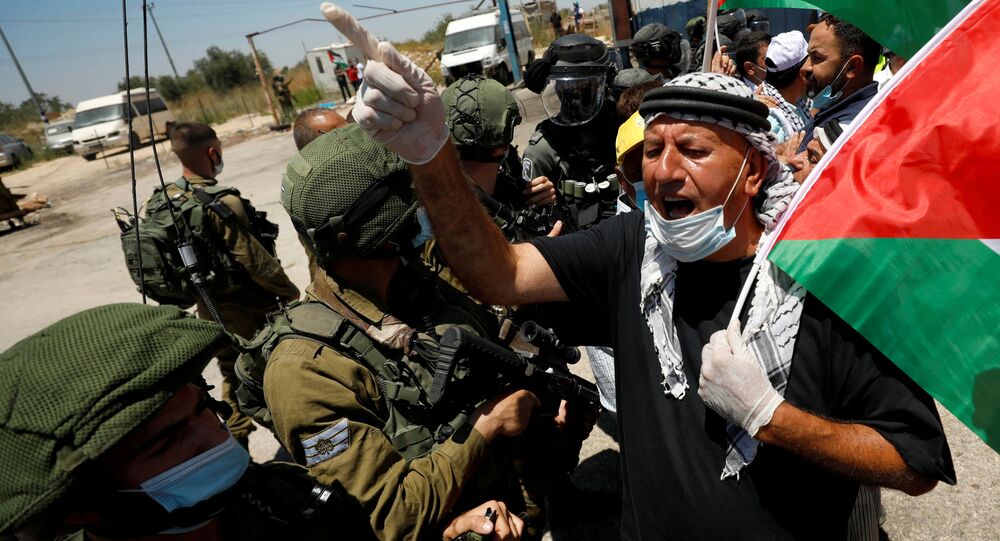 Although it is still unclear whether Benjamin Netanyahu will roll out his sovereignty bill later today, Gaza clashes are a definite possibility. There is less chance of violence in the West Bank, partly due to the COVID-19 outbreak and partly due to frustration with the Palestinian authorities.

After months of back and forth talks, bickering and hesitation, Benjamin Netanyahu's sovereignty bill that could see Israel annexing parts of the West Bank may see the light of the day on Wednesday.

That said, very few people in Israel believe it will actually happen. At least not today. Details of Netanyahu's plan are hard to come by and there has been little information about the scope of the move or the number of Palestinians who will be absorbed by Israel.

Despite this, Gaza Strip Palestinians are prepping themselves for what they see as the worst-case scenario.

After Hamas, the Islamic group that holds sway over the Gaza Strip, called 1 July a “day of real rage” and declared that Gaza will be part of any confrontation on the ground, thousands of people are expected to take to the streets later in the day to protest against what they see as Israel's illegal land grab and “attempts to partition the country”.

The Israeli military has already boosted its presence in the area, knowing that rallies of this sort will most probably turn violent, just as they did after Washington moved its embassy from Tel Aviv to Jerusalem, prompting Hamas to announce the beginning of the third intifada, or when the Trump administration rolled out its "deal of the century" peace plan in late January, leading to violent clashes between Palestinians and Israeli security forces.

Mixed Feelings in the West Bank

Even though Hamas claims that all the Palestinian factions are “united” against Netanyahu’s plans, the situation is different in the West Bank, with many having mixed feelings towards the unfolding crisis.

Palestinians, encouraged by Fatah, which dominates the Palestinian Authority and remains in charge of the West Bank, are expected to stage demonstrations and rallies across the region, but their magnitude will be limited.

Despite banners venting anger at the "occupation" that are seen all across the West Bank, the local authorities have urged people to stay at home due to the COVID-19 outbreak that has already seen more than 1,200 people infected. Salma Rashed, a Gaza-based journalist who has been covering the Palestinian issues extensively but whose real name cannot be revealed for security reasons, says many will follow the directives given to them and stay indoors.

But the fear of the pandemic is far from being the only reason that will keep masses away from clashing with the Israelis. Frustrated with their own government's handling of the virus, and its failure to keep Netanyahu's "hands off the West Bank", some say they'd rather see Israel applying its sovereignty and giving them, the Palestinians, equal rights and an array of social benefits they are currently lacking than stay under the Palestinian Authority's control.

"Palestinians hold President Mahmoud Abbas responsible for the current mess. He is perceived as a weak leader and as someone, who has been negotiating with Israel for decades, doing nothing to stop its plans", Rashed says.

Over the years, the approval ratings of Abbas have dropped significantly. In December 2019, for example, some 60 percent of Palestinians said they wanted the PA chief to resign, a trend that has continued especially after US President Donald Trump rolled out his "deal of the century" peace plan in late January.

Abbas' attempts to handle the situation, including his termination of security cooperation with Israel, the preparation of "resignation speech" in the event of Bibi implementing his plan to extend Israeli sovereignty and the threat to "hand over the keys of the PA to Netanyahu," didn't speak to the masses who felt his actions were 'too little too late.'

But the Palestinian public is far from being Abbas' only critic. Hamas, as Fatah's main rival, also holds him responsible, accusing him of taking a "soft" approach towards Netanyahu's "expansionist" activities.

“The Palestinian Authority’s leadership must take the lead and invite the PLO’s leading bodies in order to get a united stance to face the annexation plan. Unfortunately, we have not heard any positive response from the PA to the Palestinian unity proposals declared by the different Palestinian factions,” a Hamas spokesperson said on Tuesday.

Hamas All Talk, No Action?

Hamas has even threatened to wage a war against the Jewish state to prove that it is the only force that can confront the "occupation".

But Rashed believes that Hamas, which has repeatedly described Netanyahu’s plans to “annex” the West Bank and the Jordan Valley as a “declaration of war” on Palestinians, is "all talk, no action".

After Israel's 2014 Operation Protective Edge that was aimed at destroying Hamas' infrastructure simultaneously causing billions of dollars in damage, the Gaza Strip has never managed to fully recover from the war. The raging pandemic has exacerbated the situation, sending the already high unemployment rates to unprecedented levels and pushing thousands below the poverty line.

"Hamas' ratings have recently dropped, with more and more people dissatisfied with their lack of ability to handle the acute economic crisis that has only worsened with time. Gazans will not let Hamas start any new war. The leadership of the Islamic group knows it, they will make statements but they would avoid a confrontation," she explained.

Instead, they want the PA to do the "dirty job," simply because Palestinians in the West Bank have more chances to confront and clash with Israeli soldiers so Hamas "wants to use them as a tool," suggests Rashed, adding that even if the Islamic group does manage to push people into the streets, it won't move Israel an inch from its original intention.

And while many Palestinians are bracing for another “day of rage”, Netanyahu urges them “not to waste another opportunity” for peace:

“Applying Israeli law to areas of Judea and Samaria [West Bank territories] will remain part of Israel in any future peace deal will not set back the cause of peace; it will advance peace”, the Israeli prime minister said earlier this week.