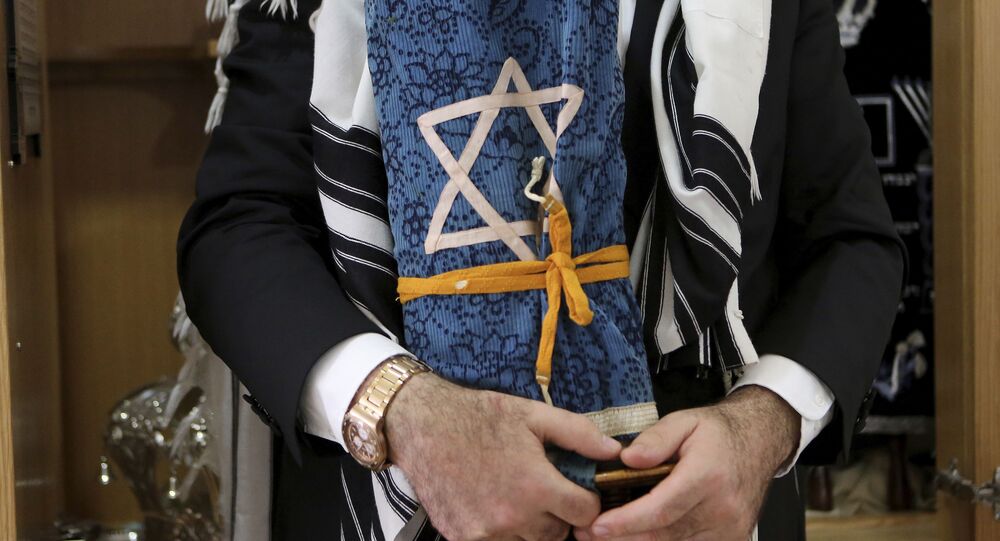 Judaism is No Exception: Tolerance Towards Other Religions is in UAE's DNA, Local Rabbi Says

Addressing a conference of the American Jewish Committee on Tuesday, the UAE's Foreign Minister said his country could work with Israel in some areas, including technology and healthcare, while still maintaining political differences with Tel Aviv.

First it was news about a synagogue opening in Abu Dhabi as part of a multi-faith complex set to be completed in 2022.

Then it was reported that the UAE was offering kosher food and restaurants for observant Jews, and now the Arab country is also said to have its first chief rabbi.

It is not a government position that brings an income but Yehuda Sarna, who is based in the US and travels to the Emirates several times a year, says he travels from Abu Dhabi to Dubai to lead holiday and weekend services for a tiny Jewish community in the country.

Numbering only a few thousand, they are not native residents of the UAE. The community is made up of foreigners who live, study, and work in the UAE.

"I started going to the UAE some ten years ago. Back then, services were almost non-existent and the ones that were held, were not regular, often taking place inside people's homes", the rabbi recalled.

That, however, was soon to change. Regular weekly services started taking place in the UAE in 2015 when the Gulf country started making its first steps towards religious openness and coexistence.

Still kept from the public eye, a group of Dubai Jews, who work in the Emirate, rented a small villa in a quiet yet posh neighbourhood, turning it into a synagogue that later became a centre or a one-stop shop for the local Jewish community.

In 2016, the local authorities made another step in the direction of tolerance, establishing the so-called Ministry of Happiness and Tolerance aimed at bridging peoples and religions that exist in the UAE, and two years later Rabbi Sarna started getting "clear signals" from the government that hiding Jewish religious activities was no longer necessary.

That same year Bloomberg published a report revealing that the first Jewish centre had opened its doors to the general public. Practicing Judaism was no longer a "sin".

But the UAE's openness was directed not only at Judaism. In 2019, the country announced a year of tolerance hosting multiple conferences, workshops, and activities on the subject, and in February it even welcomed Pope Francis for a historic three-day tour.

For critics, the government's actions were nothing more than a ruse to distract international attention from alleged human rights violations and “persecution of minorities”, but the rabbi looks at it differently.

"I look at it from a cultural lens. Emirati authorities have always been tolerant towards others, it is in their DNA. Churches have been flourishing here, unlike in some other areas of the Middle East, and Jews are also protected".

Yet, many Jews and those who hold Israeli passports are still not welcome in the UAE.

Under the radar, however, the UAE has maintained contacts with Tel Aviv allowing Israeli athletes and several politicians to visit the country. In 2018, for example, Israel's then minister of sports Miri Regev paid a visit to Abu Dhabi after the country's national anthem was played at a judo competition hosted by the Emirate. A year later it was then-Foreign Minister Yisrael Katz who arrived in the area to discuss environmental issues.

However, for ties with the UAE and other Gulf states to grow stronger, Israel will need to resolve its decades-long conflict with the Palestinians. Speaking on condition of anonymity, a Saudi official told Sputnik in April that his kingdom as well as other neighbouring states including the UAE would be open to establishing ties with the Jewish state if it took concrete steps towards peace.

Similar views were also expressed by an adviser to the Bahraini monarch back in March.

But given Israel's annexation intentions set for early July, with Tel Aviv planning to extend its sovereignty over parts of the West Bank, the possibility of closer ties seems to be remote.

On Sunday, the UAE ambassador to Washington warned Israel that its position in the Arab world would be at risk if it pressed ahead with its annexation plans.

Rabbi Sarna doesn't like talking politics, saying that at the end of the day it would be for the UAE government to decide what to do with Israel but reassures that no matter what happens between the two states, it won't have any negative impact on the Jews living in the Emirates.

"It might come as a surprise but the Jewish people residing here feel much safer in the UAE than in their countries of origin, and I don't think it will change".