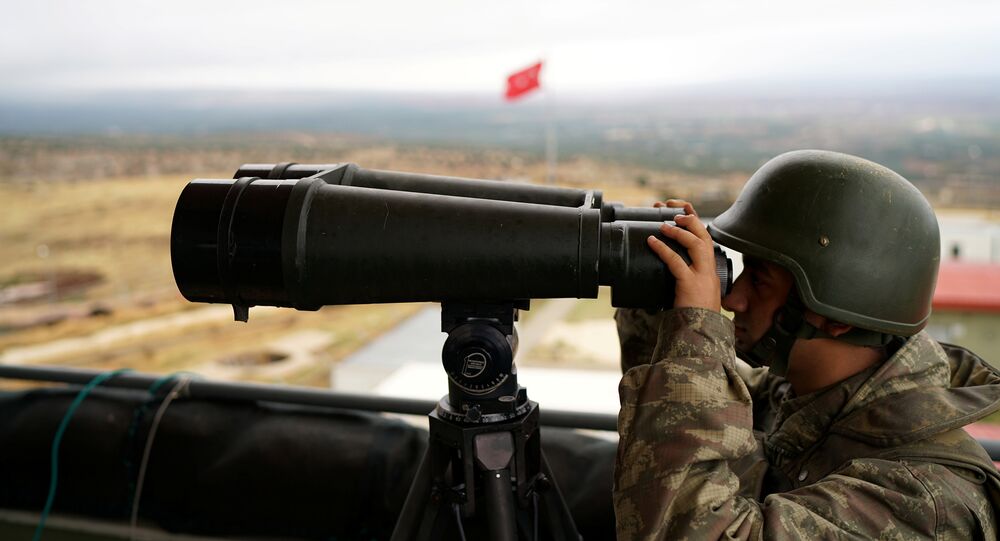 The ‘Stolen Province’: Why Turkey Was Given A Corner Of Syria By France 80 Years Ago

Turkey’s President Recep Tayyip Erdogan is becoming more and more embroiled in a direct fight with Syria over Idlib Province. The fighting is directly across the border from Hatay, a province which was given to Turkey in 1939 after a disputed referendum.

Turkey has lost a total of 54 soldiers in Idlib province this month as Syria's President Bashar Assad and his Russian allies have accused Turkey of failing to honour a deal to separate extremist groups from other fighters in the region.

The Syrian Army now controls the southern half of Idlib province but the fighting has increased the stream of refugees attempting to cross the border into the Turkish province of Hatay.

​The border between Syria and Turkey is a relatively straight line from east to west until it reaches the Orontes river.

Then it suddenly dips and heads southwards for about 80 miles, before turning west again and meeting the Mediterranean just beyond Mount Kilic.

Turkey grabbed the Alexandretta province from French Syria in 1939 after a rigged referendum.
Will UN Security Council condemn this unilateral territorial change?#GolanHeights pic.twitter.com/DrT4ZGBQBl

​Strategically this little corner of the Levant - known as Liwa Iskanderoun to the Syrians - is vitally important to the Turkish state.

​Now called Hatay province, it contains the cities of Antakya and Iskanderun - previously known as Antioch and Alexandretta - and the port of Dortyol, which was known as Chork Marzban to its Armenian population before the genocide which finally ended in 1923.

In that same year the founder of modern Turkey, Kemal Ataturk, signed the Treaty of Lausanne, which enshrined the boundaries of the Turkish state.

​Those borders remain exactly the same today - except for Hatay province, which suddenly joined Turkey in 1939.

Syria, Lebanon and much of the Middle East had been part of the Ottoman Empire until it collapsed after being defeated in the First World War.

Under the Treaty of Lausanne, Hatay was part of the French mandate of Syria and Lebanon but just before the Second World War broke out, Paris suddenly decided to hold a referendum and Hatay voted to become part of Turkey.

Give Hatay to Syria, Freedom to Kurdistan in the Middle East now! @KurdishIndependence

​Syria became independent in 1945 - with Lebanon as a separate state - and refused to recognise Hatay as part of Turkey.

But little was said about it until the conflict in Syria began to draw in President Erdogan and the Turkish armed forces several years ago.

Syrian media began to highlight the suspicious and controversial way Hatay, or Liwa Iskanderoun, was given to the Turks.

In the late 1930s, France was growing increasingly worried about an impending war with Hitler’s Germany and French diplomats were desperately trying to sign up potential allies in Europe and the Middle East.

Ataturk died in 1938 and his successor, Ismet Inonu, was keen to continue his Turkish nationalist fervour.

So when the French suggested a treaty of friendship during the upcoming war, Inonu was willing to accept, on one condition that Turkey recover Hatay.

France agreed, but was technically breaching the Treaty of Lausanne, so in order to give it a fig leaf of respectability, the French suggested a referendum.

​Hatay was at the time a mixture of nationalities - Turks, Turkmen, Sunni Arabs, Alawites (Alevis), Armenians and even some Greeks - with no clear majority, but Ankara is widely believed to have bussed in Turks from other parts of Anatolia and rigged the result of the referendum.

Relations between Turkey and Syria were strained for decades over the issue of Hatay but they began to improve in the 1990s as Turkey sought Syrian help in combating Kurdish guerrillas.

Just before the Syrian civil war broke out in 2011, an agreement was signed to build a $28 million Syrian-Turkish Friendship Dam on the Orontes River.

But construction was postponed by the conflict and now Turkey and Syria have had a falling out, with Erdogan furious at Assad for daring to target Turkish troops even though they were siding with jihadist rebels.

Last year Turkey marked the 80th anniversary of the reunification with Hatay.

“Hatay, which chose to embrace the motherland of its own free will, strengthened our national unity and integrity, and has been a symbol of our determination to live in peace, to protect our unity and solidarity,” Erdogan said during celebrations.