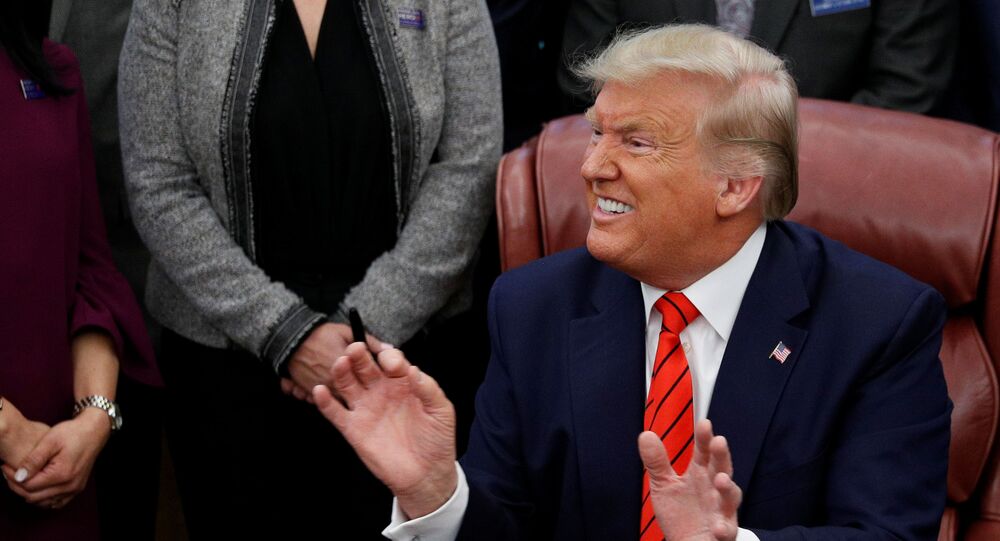 Iranian Foreign Minister Mohammad Zarif, on the sidelines of the Munich Security Conference, has suggested that US President Donald Trump is misguided by confusing information, leading him to make poor choices in US foreign policy.

Zarif argued that Trump's 2018 decision to unilaterally withdraw from the landmark 2015 nuclear agreement (the Joint Comprehensive Plan of Action (JCPOA) was influenced by incorrect advice.

"President Trump has been convinced that we are about to collapse so he doesn't want to talk to a collapsing regime [...] I believe President Trump, unfortunately, does not have good advisers [...] He's been wanting for Iran to collapse since he withdrew from the nuclear deal", Zarif told a group of top defence officials and diplomats meeting in Germany, cited by AP.

Zarif suggested that the US assassination of Iranian General Qasem Soleimani on 3 January was a miscalculation by Trump that has resulted in a surge of regional support for Tehran, according to AP.

The unilateral abandonment of the JCPOA by the Trump administration sparked increased tension in the Middle East. Senior Iranian and US officials have over the last several months repeatedly claimed that Tehran and Washington are close to full-scale war.

Zarif candidly noted earlier that Trump must be blamed for putting both nations and the entire Middle East subcontinent on the brink of war.

The killing of top Iranian general Soleimain, under Trump's direction, alarmed many in the American political establishment that erratic moves by the US president could endanger national security.

© REUTERS / SARAH SILBIGER
US Senate Advances War Powers Resolution to Limit US Military Action in Iran
The US House of Representatives and the US Senate earlier approved two separate resolutions in a bid to limit Trump's ability to conduct US military actions against Iran without gaining congressional authorization. The first - concurrent resolution H.Con.Res.83, pursuant to a section of the War Powers Resolution of 1983 - was adopted by the US House in January and will not be presented to the US president for a signature.

The second document, approved by the US Senate on Thursday, is joint resolution S.J.Res.68 that has full legal force to curb Trump's war aspirations.

S.J.Res.68 has been sent to the US House for approval. The White House has issued a warning that it will veto the legislation.

Trump, who justified the assassination of Soleimani by claiming that the latter was an imminent threat to American assets abroad - complained that the Senate's move to limit his powers to wage war send's a "bad signal" to Iran.