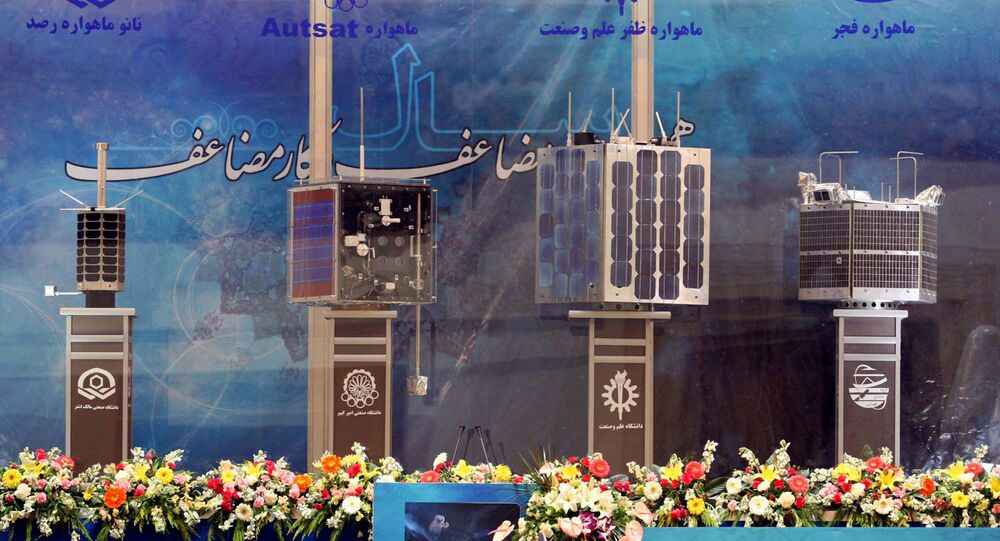 The US has long accused Iran of trying to develop both nuclear weapons and the long-range means of their delivery, and re-imposed sanctions against the country in 2018 in a professed attempt to prevent that. Tehran denies seeking to build nuclear weaponry, stressing that it's against their religion.

Iran has unsuccessfully launched it fourth satellite, called Zafar ("Victory" in Farsi), into orbit on 9 February. It was preceded by two unsuccessful launch attempts in 2019 and is expected to be followed by the delivery of four more satellites.

The launch, however, was denounced by the US, which claims the carrier rocket can be used to deliver nuclear warheads and that the whole project was cover for a long-range ballistic missile test.

© AFP 2021 / STR/VAHIDREZA ALAI
Iranian flag fluttering in front of Iran's Safir Omid rocket, which is capable of carrying a satellite into orbit, before it's launch in a space station at an undisclosed location in the Islamic republic

Tehran denies that the rocket carrier is intended for military use, indicating that the satellite's mission will be to take ground photos and collect data needed to study earthquakes and deal with other natural disasters. Iran has also long denied pursuing the goal of producing nuclear weapons, insisting that their use goes against Islam. The Islamic Republic's authorities have also repeatedly pointed out that its nuclear sites are monitored by the International Atomic Energy Agency (IAEA).

The US and Israel, however, have refused to retract their accusations. Instead, in 2018 the Trump Administration withdrew from the Iran nuclear deal, which had limited the country's nuclear programme's development, and imposed sanctions against the Islamic Republic. The imposition of sanctions has led Tehran to stop adhering to the deal's provisions, almost two years after Trump first called the accord's existence into question.