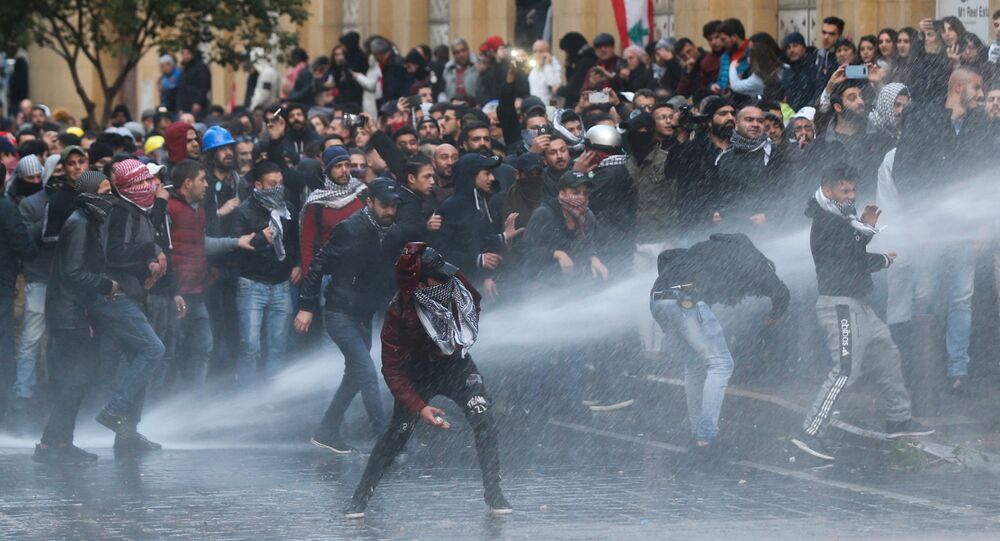 BEIRUT (Sputnik) - Clashes between Lebanese anti-government protesters and law enforcement resumed near the parliament building in the capital Beirut on Saturday, with police resorting to tear gas and water cannons, a Sputnik correspondent reported from the scene.

Protesters from across Lebanon flocked to Beirut earlier in the day to attend the "Saturday of outrage" rally near the parliament building against economic mismanagement and the weakening national currency.

At least 75 people were injured during the violent clashes between the protesters and the police, the TV channel Al Hadath reported, citing the Lebanese Red Cross.

"Over 65 people... have been taken to nearby hospitals and over 100 people have been treated at the scene", a Red Cross spokesman said as quoted by Reuters.

Lebanese President Michel Aoun has urged the army and security commanders to restore peace in Beirut amid reports of clashes.

A little less teargas but the situation is still intense. Trying to move around different locations to catch all angles. Still a protest in Down Town - not a riot yet. No direct physical contact with the police just teargas. #LebanonProtests #beirut #lebanon pic.twitter.com/G9rzxCauPR

​Clashes with law enforcement ensued as protesters were throwing stones and metal rods at officers and eventually attempted to storm the fences of the parliament building.

Chaos as water canons and tear gas are fired at protesters outside parliament on day 94 of #Lebanon’s nationwide uprising #lebanonprotests #لبنان__ينتفض pic.twitter.com/RX1jmiwGW0

​Mass protests in Lebanon began in October amid a crippling economic crisis.

Live from #Beirut - where electricity is cut from the whole Martyr square. Police is cracking down on protestors now. Numbers are still big. Teargas pouring like rain every 5 minutes. #lebanon #LebanonProtests pic.twitter.com/4XVbsd6rXB

People have been demanding urgent reforms to end the deepening liquidity crisis, which the country’s president, Michel Aoun, has blamed on sanctions. The resignation of Prime Minister Saad Hariri's government last fall failed to remove people from the streets.

On 14 January, anti-government protesters reportedly gave Diab 48 hours to form a new cabinet. A government that satisfies all the political parties has still not been formed. People remain in the streets and are demanding reforms amid a protracted economic and financial crisis.

In December last year, President Michel Aoun appointed former Education Minister Hassan Diab as the next prime minister. Some demonstrators are now protesting against the new prime minister-designate, regarding his appointment as the result of internal agreements between the political forces they are opposing.