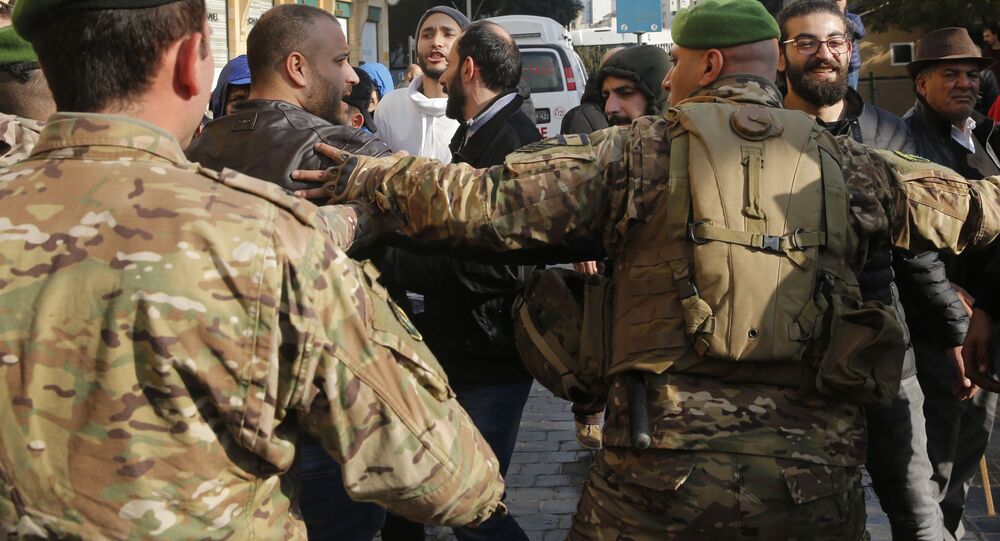 BEIRUT (Sputnik) - According to the military, eight protesters were detained in Tripoli as a result.

Fourteen servicemen were injured during protests in the northern Lebanese city of Tripoli on Friday after demonstrators hurled stones at the military, the national armed forces said amid reports about parallel violent rallies in Beirut.

Demonstrators in Beirut, meanwhile, gathered for an anti-corruption rally. They attempted to block the traffic near a city council building, which resulted in clashes between them and those opposing anti-government protests, the LBCI Lebanon broadcaster reported.

The police and army units that arrived at the scene managed to take control of the situation, preventing a mass brawl between the demonstrators and their opponents.

The protesters, in turn, have partially blocked the road near the office of the An-Nahar newspaper in central Beirut, where additional police reinforcement is now heading to.

© AP Photo / Maya Alleruzzo
An injured woman cries out as she is assisted during an anti-government protest outside of the Beirut municipality in Lebanon, Friday, Jan. 10, 2010. Scuffles broke out between anti—government protesters calling for the ouster of the city's mayor and the governor of the province, and supporters of outgoing Prime Minister Saad Hariri, who handpicked them.

Protests in Lebanon started on 17 October following the government’s intent to introduce a tax on internet calls made via the WhatsApp messenger. Even though the controversial measure was scrapped and the government of Saad Hariri resigned, people have remained in the streets to demand reforms amid protracted economic and financial crisis.

On 19 December, President Michel Aoun designated former Education Minister Hassan Diab as the next prime minister. Some demonstrators now protest against the new prime minister-designate, viewing his appointment as a result of internal agreements between the political forces they are opposing.