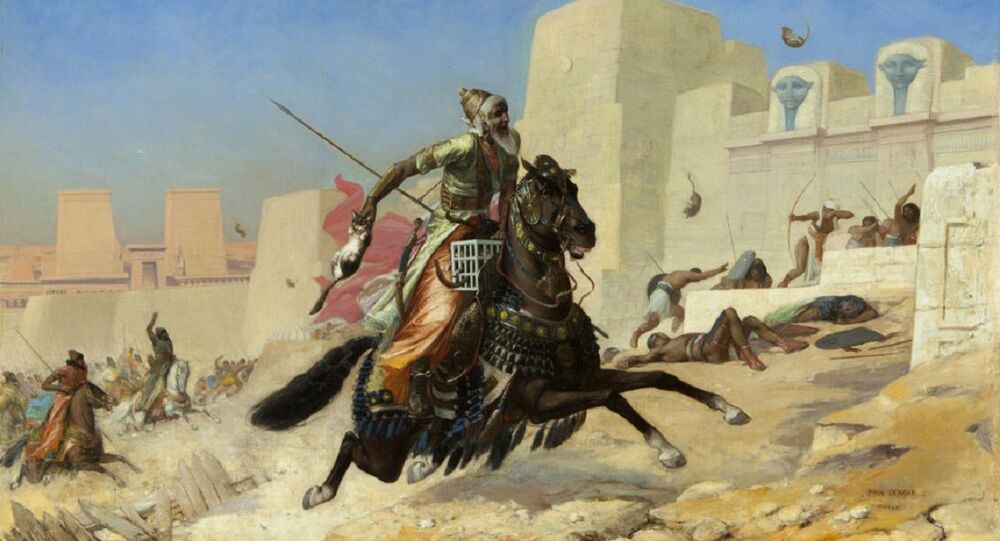 Earlier, following threats by Iranian officials to exact revenge on the US for the assassination of a top Iranian military commander, the US president warned that the US has “targeted 52 Iranian sites,” including the country’s cultural landmarks, for destruction in the event of an Iranian attack on Americans or American assets.

“A reminder to those hallucinating about emulating ISIS [Daesh]* war crimes by targeting our cultural heritage: Through MILLENIA of history, barbarians have come and ravaged our cities, razed our monuments and burnt our libraries. Where are they now? We’re still here, and standing tall,” Zarif wrote, recalling his country’s status as one of the world’s oldest continuous major civilizations.

A reminder to those hallucinating about emulating ISIS war crimes by targeting our cultural heritage:
Through MILLENNIA of history, barbarians have come and ravaged our cities, razed our monuments and burnt our libraries.

Where are they now?

The Iranian foreign minister went on to note that targeting a country’s cultural sites is a war crime under international law, and warned that “whether kicking or screaming, [the] end of US malign presence in West Asia has begun.”

In a series of tweets on Saturday, President Trump warned that if Iran responded to the US assassination of Revolutionary Guards Quds Force commander Qasem Soleimani by targeting “any Americans, or American assets,” the US would carry out strikes on “52 Iranian sites (representing the 52 American hostages taken by Iran many years ago,” including “some at a very high level and important to Iran and the Iranian culture.”

On Sunday, Iranian Army Chief Maj.Gen. Abdolrahim Mousavi commented on Trump’s remarks, saying the US did not “have the courage to carry out” such attacks. Iran’s military has already identified nearly three dozen US targets in the Middle East which it said were “within reach” of Iran’s vast arsenal of missiles. The US has an estimated 5,000 troops stationed in Iraq, with thousands more deployed at US bases across the Arabian peninsula, and in Pakistan, Afghanistan, Turkey, Syria and other countries near Iran’s maritime and land borders.

Also on Sunday, US Secretary of State Mike Pompeo denied that President Trump threatened to target Iranian cultural sites, encouraging his Fox News interviewer to "read what he said."

Regional tensions began escalating last month, after a December 27 rocket attack on a US military base in northern Iraq killed a US civilian contractor. The US blamed a Baghdad-allied Iraqi Shia militia group for the attack, and launched airstrikes against five facilities across Iraq and Syria, killing over two dozen Shia militants. The attack led angry crowds of protesters to try to storm the US Embassy in Baghdad. The US accused Qasem Soleimani, commander of the Revolutionary Guards Quds Force responsible for Iranian military operations abroad, of being behind the violence. On January 3, Soleimani was killed in a US drone strike at Baghdad’s International Airport. A day later, US forces across Iraq began facing sporadic attacks, including a rocket attack on the US Embassy in Baghdad and an airbase north of the Iraqi capital. Iranian officials have warned that they would not leave the killing of Soleimani unanswered, and former CIA Director Michael Morell warned that the decision to kill the senior Iranian soldier would lead to “dead Americans.”

*A terrorist organisation outlawed in Russia and many other countries.