MOSCOW (Sputnik) - The Iranian Ambassador to the United Kingdom, Hamid Baeidinejad, has slammed the Reuters media agency in a series of tweets for their reporting of protests that took place in Iran in November, which the agency claimed in a recent report resulted in the deaths of 1,500 people.

"The Reuters report that claims 1,500 people were killed in recent events and attributes the violence to the leadership of the Establishment is an example of such reports", Baeidinejad said in tweets on 24 December, as quoted by Tasnim News Agency.

On 23 December, Reuters stated that the updated death toll was based on information provided by three Iranian officials. The ambassador strongly rejected these claims and accused the agency of falsifying information.

"Based on an old-fashioned policy, some media outlets make a lie colossal to make it believable", Baeidinejad remarked.

​The ambassador queried how an agency with no office in Tehran could accurately report on the numbers of causalities, which Reuters claimed included 400 women.

"…In its fake news, Reuters points to the killing of hundreds of women in the recent incidents while the presence of women in the demonstrations was low", Baeidinejad tweeted.

The ambassador also remarked that a 16 December report by the Amnesty International NGO, which stated that at least 304 people died between 15 and 18 November during protests against increased gasoline prices, was also based on false information. 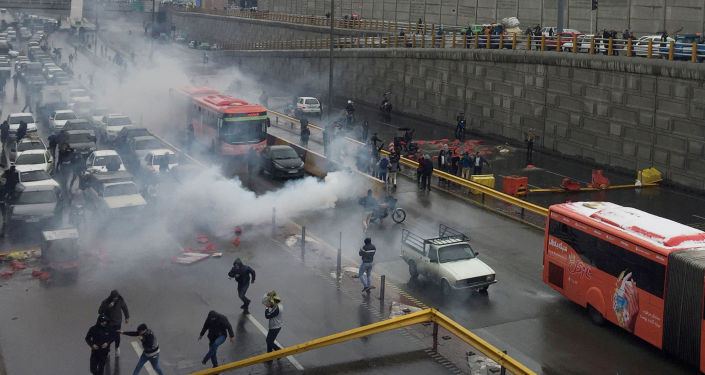 © REUTERS / WANA NEWS AGENCY
Iran Summons Swiss Envoy Over US Comments on Protests Against Petrol Price Hikes - Reports
Iran was struck by a wave of protests after the government raised gasoline prices in mid-November. Some of the rallies were peaceful, according to local media, while others took a violent turn. Casualties were reported among both protesters and security forces.

Leading Iranian politicians, including Supreme Leader Ali Khamenei, have called the protests a US-led conspiracy against Iran. Earlier in December, US Special Representative for Iran Brian Hook said that over 1,000 people died in the protests. Tehran rebuked these claims.