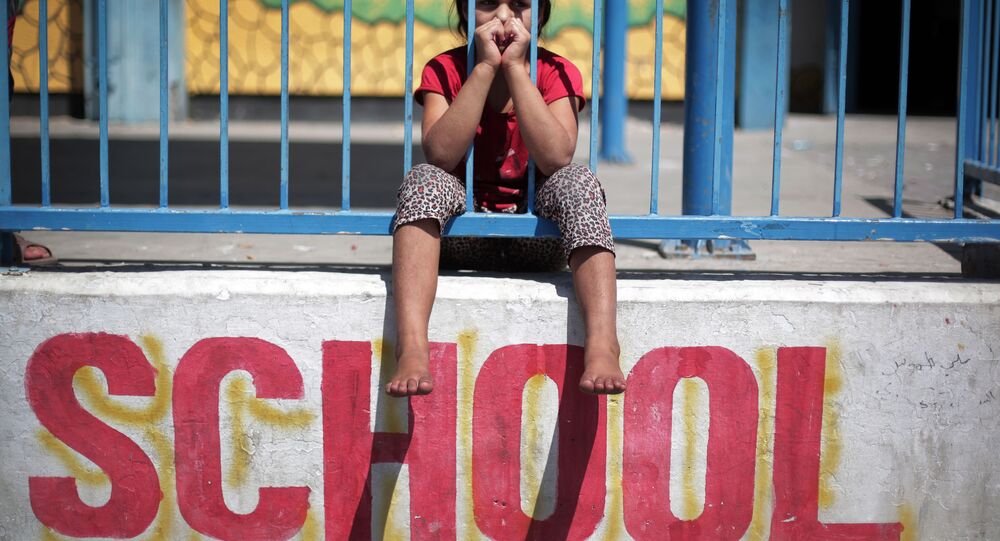 Norway supports Palestinian education authorities with NOK 55 million ($6 million) annually and has plans to up its help by another NOK 220 million ($24 million) over the next few years.

Norwegian MPs from across the political spectrum have called to cut aid to the Palestinian Authority after it was reported that new Palestinian schoolbooks glorify holy war and martyrdom as “the most important thing in life”.

A new Palestinian syllabus almost completely omits Israel's very existence and all references to the peace process of the previous years, the Institute for Monitoring Peace and Cultural Tolerance in School Education (IMPACT-SE) warned in a report citing dozens of examples.

Another example is Newton's second law that shows the relationship between forces and motion. The picture in the textbook shows a masked person aiming at several soldiers with a slingshot.

“During the first Palestinian uprising, Palestinian youths used slingshots to confront the soldiers of the Zionist Occupation and defend themselves from their treacherous bullets. What is the relationship between the elongation of the slingshot’s rubber and the tensile strength affecting it?” the text said.

“This should lead to Norwegian funds for this work being frozen until the undemocratic and hateful attitudes in the teaching material are corrected”, Scheff told Aftenposten.

This year, Norway increased its annual support to Palestinian education authorities from NOK 40 ($4.3 million) to 55 million ($6 million) annually and has plans to up its help by another NOK 220 million ($24 million) over the next few years.

Anniken Huitfeldt of the Labour Party requested an explanation from the Conservative Foreign Minister Ine Eriksen Søreide about the government's actions over the dangerous content of the books. She stressed that Norwegian funds must be used to “promote peace and reconciliation”, not “build up contradictions”.

“I believe we need to have a bigger debate about whether Norwegian taxpayers should contribute to a regime that is developing so poorly. Sooner or later we have to put our foot down”, Tetzschner told Aftenposten.

Hans Fredrik Grøvan of the Christian Democrat Party has advocated to freeze support until the syllabus has been changed sufficiently, while the Progress Party proposes to cut Norway's support by 10 percent.

By contrast, Petter Eide of the Socialist Left Party and the head of the parliamentary Friends of Palestine group, suggested more dialogue.

“No, there is a lot we can do without cutting the support. Instead of criticising them, we should demand a dialogue that can help improve the educational content”, Petter Eide said.

“Don't forget that we're in fact living under an occupation. Our children grow up in a besieged country. Every single day is suffering for our children”, Palestinian Vice Education Minister Dr Basri Saleh told Aftenposten, addressing the criticism. According to him, some of the examples listed by IMPACT-SE were either later removed or taken out of context.

State Secretary Audun Halvorsen of the Ministry of Foreign Affairs stressed that Norways support mainly goes to infrastructure, such as building and renovating schools, and does not cover salaries, operating expenses, curricula, or learning material.

Norway was one of the first countries to recognise Israel in 1949 and has played a major part in peace efforts. The attitude toward the Israeli-Palestinian conflict, however, is one of the indicators of the left-right divide in Norwegian politics. While the Friends of Israel caucus mostly features right-of-centre MPs from the Conservatives, the Christian Democrats and the Progress Party, the Friends of Palestine relies heavily on the left-of-centre parties, above all Labour and the Socialist Left.