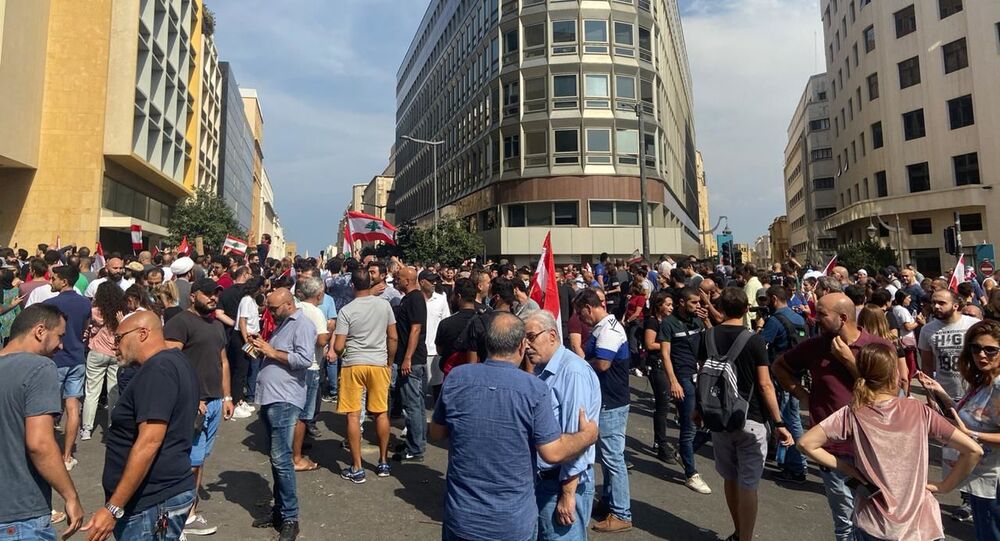 On Friday morning, Lebanese security forces used tear gas and rubber batons in downtown Beirut to disperse protesters demonstrating against the tax policy of the coalition government of Prime Minister Saad Hariri. Activists blocked the southern exit of Beirut and the highway to Damascus.

The Lebanese Cabinet previously approved a tax on the use of messaging apps, such as WhatsApp ($6 per month), as well as a tax on tobacco products (about $1.30 per import pack, $0.50 per local pack). It also plans to increase VAT to 15% by 2022.

“The situation is just unbearable,” one of the protesters told Sputnik. “We live in a state of constant crisis, on the brink of survival. And now the state imposes new taxes that hit the poor common people. We protest not only for our own sake but also for the sake of our children. We’ll continue demonstrating to stop the corruption and theft that Lebanese politicians are engaged in.”

“We are protesting against corruption and quotas in the political system. We want to overthrow the government and the President, and dissolve parliament. We want to hold accountable every politician who’s stealing. By their actions, they’ve brought the people to hunger. But we all gathered here to change this. We won’t come home until we reach our goals,” a woman participating in the demonstrations told Sputnik.

Slogans Against Religious Quotas in Government

Sarkis Abu Zaed, a Lebanese political scientist and author, pointed out some national and religious characteristics of the protests. “We see many slogans against religious and regional quotas in the government; and this is an established system in Lebanon, which is known for its wide religious composition. And here, there’re lots of slogans against some special status for certain religious movements. Moreover, these slogans are advanced by people of various religious movements. This is a good sign; this will contribute to an additional unification of the Lebanese,” he said.

“Of course, people oppose today’s government, which has shown its inability to solve pressing problems. The government will urgently convene to find a way out of the crisis.”

“Until now, there are no steps towards the resignation of Prime Minister Hariri, who is looking for ways out of the crisis. His resignation won’t solve the problem but only exacerbate it. In Lebanon, there are no prospects for creating another government; even this one was created with great difficulty,” Mustafa Aloush, a member of the political office of the Mustakbal movement, led by Prime Minister Saad Hariri, told Sputnik.

On Thursday, Beirut and several major cities saw mass demonstrations, which turned into riots and clashes with security forces. Lebanese police used tear gas to disperse activists in the city centre. According to local media, dozens of people were injured, including police officers. On Friday morning, groups of activists took to the streets again, blocking the southern and northern roads leading to Beirut, as well as the main highway linking the Lebanese capital with Damascus.

Lebanese President Michel Aoun said on Thursday that the state was suffering from a financial blockade and sanctions. There is also a foreign exchange deficit in the banking sector.

In banks, the issuance of dollars is limited and the percentage of the commission for issuing foreign currency in cash has increased, which has resulted in problems both among entrepreneurs who make payments in dollars and among ordinary residents.

The deficit has already negatively affected the owners of gas stations, flour mills and pharmaceutical companies. At the same time, the Lebanese government stated that measures to stabilise the financial situation are being taken. The Central Bank, in turn, pegged the Lebanese pound to the US dollar and measures to support the work of gas station owners in order to avoid a fuel crisis in the country.