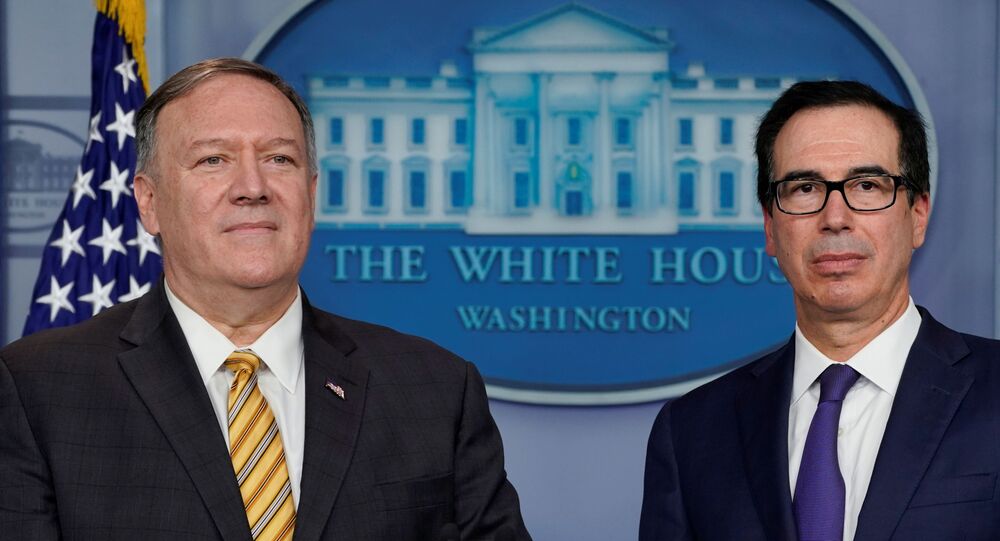 Pompeo: US Will Take Action on Any 'Sanctionable Iranian Oil Transaction'

Earlier in the day, the US Treasury Department said that Washington had designated five Chinese nationals and six entities over alleged roles in helping Iran to circumvent US sanctions.

US Secretary of State Mike Pompeo vowed that Washington would "take action on any sanctionable Iranian oil transaction," following an announcement of new sanctions targeting Chinese companies "that transported Iranian oil contrary to US sanctions."

Today, U.S. imposed new sanctions against Chinese companies that transported Iranian oil contrary to U.S. sanctions, denying the #Iran regime revenues for destabilizing conduct at the expense of the Iranian people. We will take action on any sanctionable Iranian oil transaction.

According to a notice issued by the Treasury Department on Wednesday, the new sanctions target the China Concord Petroleum Company, along with shipping vessels and companies that allegedly helped export Iranian petroleum, in violation of US sanctions.

On Wednesday, ​during a speech on the sidelines of the United Nations General Assembly (UNGA), Pompeo announced "two new actions" against Iran.

The Trump appointee said that the US is "taking new action to disentangle the IRGC from the Iranian economy" by intensifying "efforts to educate countries and companies on the risks of doing business with IRGC entities" and "punish" the latter "if they persist in defiance of our warnings."

"Importantly, we’re also imposing sanctions on the executive officers of those companies as well. And we’re telling China and all nations, know that we will sanction every violation of sanctionable activity," Pompeo said.

During his remarks, he called on other nations to join the US in condemning what he described as "Iran’s malign activity."

"Our goal is very straightforward, although not simple. But we know diplomacy is working, our resolve is strong, and our eyes our open. The awakening, I think, in the world, has begun," the US secretary of state commented.

US President Donald Trump, in a proclamation, announced that senior Iranian and Venezuelan government officials would now be prohibited from entering the United States.

According to Trump's decree, the US entry ban applies to senior officials from the Iranian government and to their immediate relatives.

The United States ratcheted up sanctions on Iran since last year as part of its "maximum pressure" campaign, targeting pillars of the Iranian economy. Last week the United States imposed another round of sanctions on Iran, including on the central bank, following recent attacks on Saudi oil facilities, which the US holds Iran responsible for. Iran has refuted the accusations.