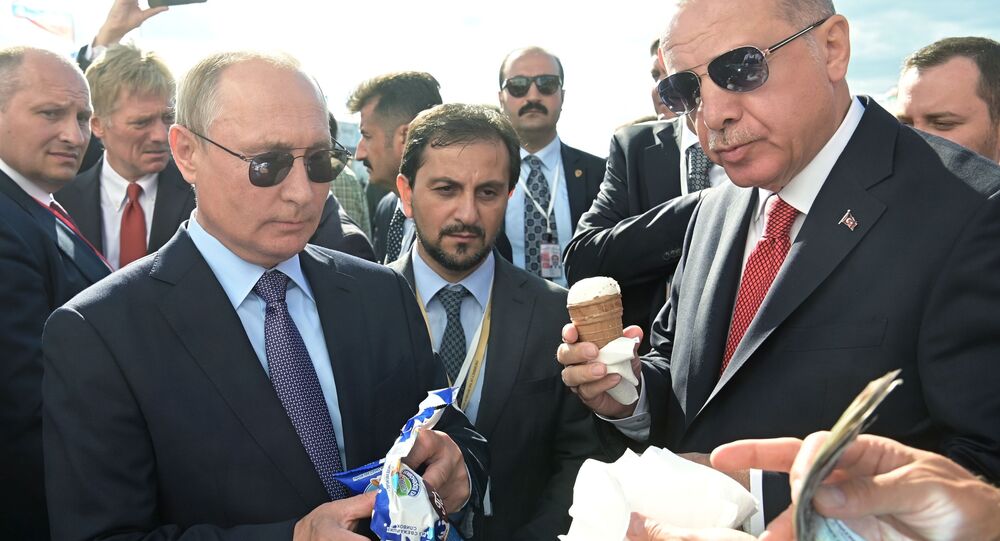 Following a meeting between Russian President Vladimir Putin and Turkish President Recep Tayyip Erdogan at the MAKS-2019 International Air Show earlier this week, the Russian leader stated that Ankara and Moscow had discussed maintaining cooperation in defence, including on both fourth-generation Su-35 and fifth-generation Su-57 jets. Putin also noted that Turkey is interested not only in purchasing, but also in jointly producing weapons.

The Turkish president, on his way back to Turkey from Russia after visiting MAKS-2019, met with Putin and told reporters that he is not ruling out buying Russia's Su-35 and Su-57 fighter jets, CNN Turkey reported.

When asked by a reporter if the Su-35 and Su-57 warcraft were among alternatives to the US F-35, the Turkish president responded, "Why not? We didn't come here in vain."

"After we learn the United States’ final decision [on F-35 jets], we will make our own moves [...] The market which allows us to meet our needs is large," Erdogan told Turkish reporters

Erdogan also noted that he would have a telephone conversation with US President Donald Trump about the F-35 within a few days, according to CNN Turk.

The Turkish president talked to journalists on board his plane enroute to Ankara after an official visit to Russia where he attended an international MAKS aviation show in which fighter jets are showcased.

While speaking with reporters, the Turkish president said that by participating in the MAKS-2019 "we had the opportunity to get to know the new products of the sector."

He also remarked that he had invited Putin to visit the Teknofest Istanbul Aerospace and Technology Festival, to be held in Istanbul on 17-22 September, according to CNN Turk.

In July, the United States announced that it would suspend the sale of F-35 fighter jets to Turkey over Ankara's purchase of Russian-made S-400 missile defense systems, adding that the Ankara would be completely removed from the project by late March 2020.

Erdogan Ready to Visit Russia Soon, Putin Has No Immediate Plans to Meet

Putin Proposes to Erdogan to Step Up Russian-Turkish Investment Cooperation