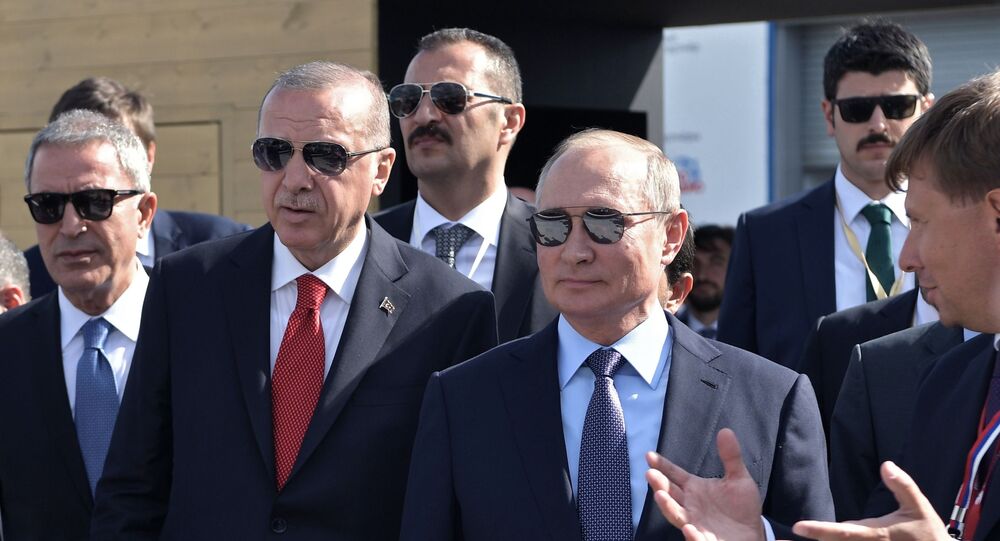 The two presidents met at the MAKS-2019 air show and discussed a number of issues, ranging from cooperation in the defence industry to the situation in Syria.

Russian President Vladimir Putin said that he and his Turkish counterpart Recep Tayyip Erdogan have discussed the possibility of continuing cooperation in the defence industry, including on both fourth-generation Su-35 and fifth-generation Su-57 jets. He added that Turkey is interested in not only buying, but also jointly producing military products.

The Turkish president has confirmed this and said that Ankara wants to continue cooperating with Moscow in the defence industry, including on the production of jets.

The presidents of the two countries met at Russia's MAKS-2019 air show that took place in the Moscow suburbs on 27 August. Russia's cutting edge fifth-generation Su-57 stealth fighter jets were featured during this year's show.

The US earlier suspended shipments of F-35 jets that Turkey ordered, citing an alleged danger from Russian S-400 air defence systems, which Ankara bought and started receiving this July. Washington claims the S-400 could reveal the jet's weaknesses to Moscow. Turkey refused to ditch the contract with Russia and refused to replace them with US-made Patriot launchers.

In the follow-up to the news regarding the suspension of F-35 supplies, Moscow offered to sell Russian Su-35s to Ankara instead. The SU-35 is just one step away from fifth-generation stealth fighters. Turkey previously denied reviewing such an option, although media reports suggested otherwise.

On Tensions in Syria's Idlib

Putin and Erdogan also discussed the situation in Syria, including recent developments in Idlib Province. The Turkish president praised the agreements on the de-escalation zone, but said that their implementation was complicated due to the Syrian military’s actions.

He further added that the latest developments in Idlib have started endangering Turkish troops, deployed in Syria without Damascus' consent. Erdogan noted that "all relevant steps" will be taken to avert danger to the country's forces.

President Vladimir Putin said that Russia shares Turkish concerns about the situation in Idlib, but is mostly worried about terrorist activities in this region.

"Terrorists continue to shell the positions of the Syrian government troops, try to attack Russian military facilities. The de-escalation zone should not serve as a refuge for militants and, moreover, a springboard for new attack", Putin said.

Responding to ongoing shelling, coming from the territory of Idlib, the Syrian Army earlier in August launched an offensive and secured control over the town of Khan Sheikhoun and number of other settlements in Idlib and the north of Hama Province.

Astana Format "Most Effective" in Tackling Crisis in Syria

Russian President Vladimir Putin also praised the results, achieved by the Astana format, which includes Russia, Turkey and Iran, calling it the "most effective mechanism" in resolving the Syrian crisis. He further added that the key task at hand for the format is to achieve stabilisation of the situation "on the ground".

His Turkish colleague, Erdogan, agreed with Putin, hoping that stabilisation efforts could be taken prior to the first meeting of the Syrian Constitutional Council in Geneva, which is expected to develop a permanent solution to end the ongoing crisis in the Arab Republic.

After visiting aviation exhibitions at the MAKS-2019 air show, Putin suggested his Turkish colleague taste one of the brands of Russian ice cream, buying him vanilla ice cream in a wafer cone. The Russian president also treated other members of both delegations allowing them to pick any type of ice cream they liked.