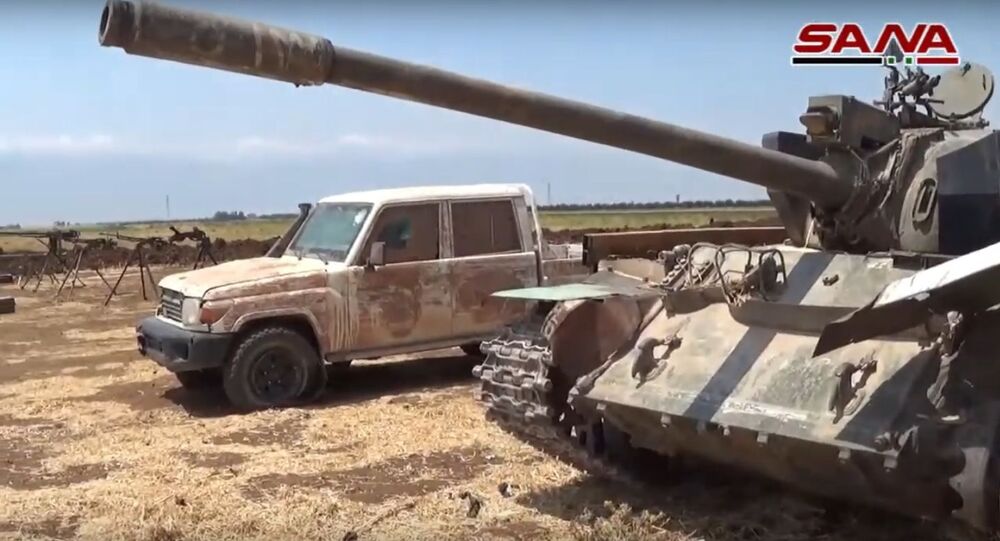 In recent years, Syrian troops, local authorities and ordinary residents have uncovered dozens of hidden caches of arms, ammo and supplies, once used by terrorist militias to try to oust the Syrian government and to turn the country into an Islamist ‘caliphate’.

Army engineers working in and around the settlements of al-Jabeen and Tal Melh in Hama province, northwestern Syria  have discovered a haul of heavy military equipment including a modified T-55 tank, a white jeep of the kind used by Daesh (ISIS)*during its campaigns across Syria and Iraq, and heavy weapons including recoilless rifles, mortar launchers, heavy machine guns and boxes of ammunition of various calibers, SANA has reported.

The find comes following operations in June to clear the remnants of terrorist militias hiding out in rural Hama, with the Syrian army reportedly deploying its elite Tiger Forces formation to the area to win back control of al-Jabeen, Tal Melh and other settlements.

Syrian forces and local authorities make regular discoveries of terrorist arms caches, including everything from TOW anti-tank launchers to advanced MANPADs. In June, Syrian forces uncovered a massive four-tonne haul of C-4 explosives in Dara’a governorate, southern Syria. Other US, NATO and Israeli-made weapons and equipment have regularly been found in areas liberated from terrorist control in recent years.

The foreign-backed civil conflict in Syria began in 2011, and has left as many as 570,000 people dead and much of the country in ruins, with millions of Syrians also fleeing the country to neighbouring Turkey, Lebanon, and Europe. In 2014, Daesh proclaimed a ‘caliphate’ over wide swathes of Syria and Iraq. Fighting alongside their Russian allies and with support from Hezbollah and Iran, the Syrian army managed to liberate the country from Daesh by late 2017, with other terrorist forces now confined to the Idlib de-escalation zone in northern Syria. Apart from the majority Kurdish militia-governed region in northeast Syria, most of the country has returned to Damascus’ control, with the government now focusing on rebuilding. Last year, President Bashar Assad estimated that reconstruction could cost as much as $400 billion and take 10-15 years to complete.

Watch Russian Military Carry Out Airstrikes Against Terrorists in Syria

Erdogan: Turkey Will Carry Out Operation in Syria East of Euphrates