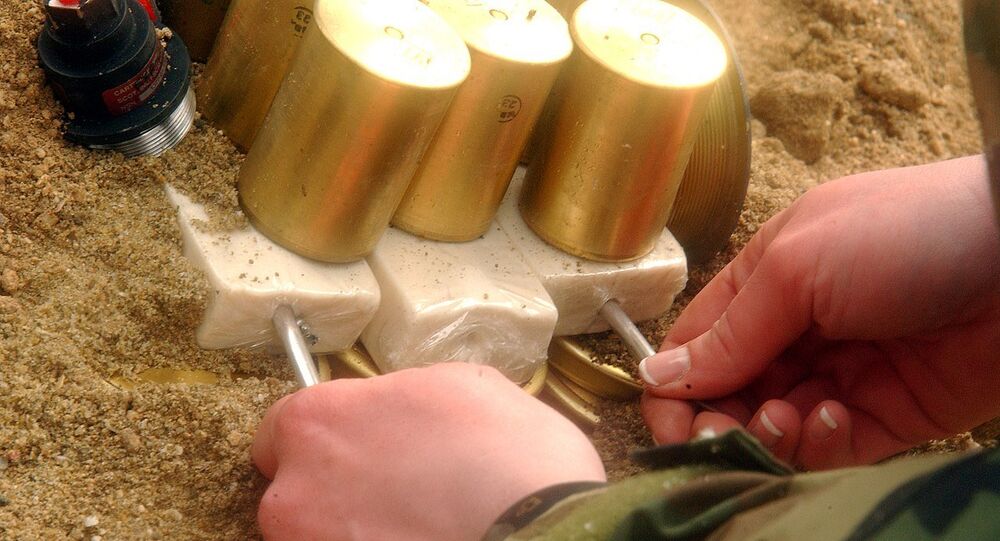 The discovery was the just the latest major cache of Western-made weapons and supplies found by Syrian authorities and the military in their efforts to mop up the remnants of terrorist militants which once fought for control of the country.

The Syrian army has showed off a massive four-tonne stock of US-made C-4 explosives hidden by fleeing terrorists in the al-Yarmouk Basin in Dara'a governorate, southern Syria.

The Syrian Arab News Agency released video footage of the explosives laid out across a field in packages.

According to the army, the explosives were found across a number of underground caches, with Daesh (ISIS)* attempting to hide them before being driven out of the area last year.

© Sputnik / Morad Saeed
Syrian Army Uncovers White Helmets’ German-Made Medical Supplies – Report
An officer from the 235th Military Intelligence Division told SANA that the deadly explosives were found by carefully combing the area and with the help of the local population.

"Through the precise security inspections by the counter-terrorism unit of the Syrian army and in cooperation with local…a large quantity of highly explosive C-4 materials were found…in the al-Yarmouk Basin area which had been controlled by Daesh," the officer said.

According to the military, the explosives were used in the creation of improvised missiles to make makeshift missiles, which often targeted residential areas during the war.

"Those weapons were used in targeting safe areas and civilians in the southern region to cause the most destruction to the properties of the citizens," the officer said.

He added that the size of the arsenal reflected the scale of support that the terrorists had received "from the countries backing terrorism," first and foremost the US, "and reflects the scenario and size of destruction that was planned by Syria's enemies."

© Photo : Youtube / syrian ministry of defense
US, Israeli-Made Arms Left by Terrorists Found in Syrian Countryside – Reports
C-4 is a moldable plastic explosive which requires a detonator or blasting cap to be used, with less than a pound of the material enough to kill multiple people, and a US military standard issue 1.25 pound M112 block of the explosive enough to demolish a truck. C-4 can be used in bombs, grenades, and claymore mines, and is particularly popular among terrorists and rebels due to its damage radius and the ease with which it can be smuggled. The United States is the primary manufacturer of C-4.