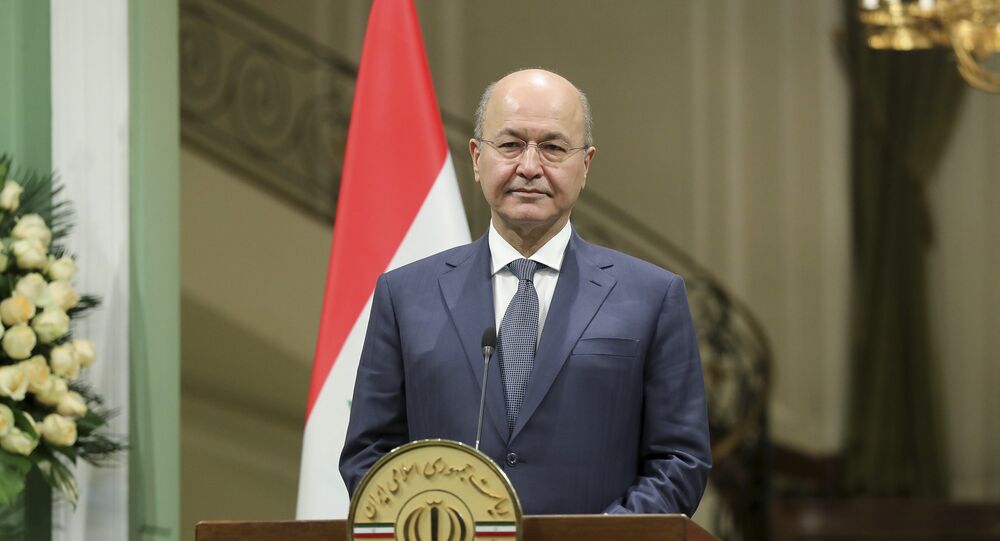 WASHINGTON (Sputnik) - Baghdad will not allow the United States to use its bases on Iraqi territory for an attack on neighbouring Iran, Iraq's President Barham Salih said.

"We do not want our territory to be a staging post for any hostile action against any of our neighbours, including Iran. This is definitely not part of the agreement between the Iraqi government and the United States," Salih told CNN broadcaster in an interview.

In an interview with CBS in February, US President Trump said that the United States was keeping its military presence in Iraq in order to be able to "watch Iran." Following the statement, Iraqi Parliament First Deputy Speaker Hassan Kaabi said that the legislature intended to work out a bill on the termination of the security agreement with the United States, which will lead to withdrawal of all foreign troops from the country. Salih then also noted that Washington did not request permission from Baghdad to deploy US troops to the country in order to "watch" Tehran.

The United States originally sent tens of thousands of troops to Iraq in the early 2000s as part of the US-led military intervention. The US military personnel completed the withdrawal from the country back in 2011 under an agreement with Baghdad, however, three years later, US troops were deployed to the country once again, this time, to help Iraqi forces fight the Islamic State terrorist group (outlawed in Russia). The United States reportedly had around 5,000 troops stationed in Iraq as of 2018.

Last week, the Iranian Islamic Revolutionary Guard Corps claimed to have downed a US surveillance drone in its airspace over the coastal Hormozgan province. The US Central Command has, in turn, said that the drone was operating and shot down in international airspace over the Strait of Hormuz. Following the incident, Trump said the United States was ready for retaliatory strikes on Iran before later calling them off, claiming they would have been "disproportionate."