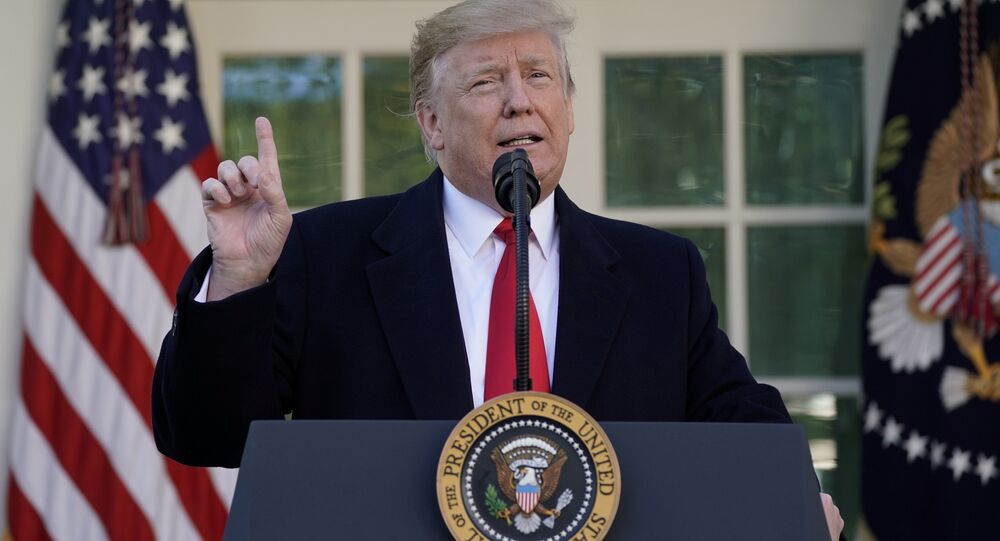 During a surprise visit to Iraq late last year, President Donald Trump said that he has "no plans at all" to remove US troops from the Middle Eastern country, stressing his interest in wanting more soldiers deployed there from Syria. He announced the withdrawal of US forces from Syria in December 2018.

In an interview with CBS News on Sunday, President Donald Trump specifically signalled his readiness to keep US troops in Iraq to keep an eagle eye on Iran.

Referring to the huge sums of money that are being spent on the US military base in Iraq, Trump made clear that one of the reasons he wants to keep it is "to be looking a little bit at Iran because Iran is a real problem".

He also described Iran as a "vicious country that kills many people".

When asked if he meant that he wanted to launch a strike on Iran, Trump said, "No, because I want to be able to watch Iran."

READ MORE: Iran FM Asserts No Trust in Promises Made by Trump or Washington — Reports

During the interview, Trump also defied previous US intelligence conclusions that Tehran actually complies with the Iran nuclear deal.

"I disagree with them. I have intel people, but that doesn't mean I have to agree," Trump said.

The interview came after his surprise visit to Iraq late last year during which he said he has no plans to withdraw US troops from Iraq, as military facilities there could be used to stage attacks on Daesh* militants.

Earlier, the POTUS said that some US forces moving out of Syria will go to the base in Iraq and "ultimately some will be coming home." The US troops' withdrawal from Syria was announced by Trump in December 2018.

© Sputnik / Vladimir Fedorenko
Tehran Ridicules Trump's Claim of Iran Seeking Talks as 'Unattainable Dreams'
Tensions between Iran and the US heightened after Washington reinstated a spate of economic sanctions against Tehran following Washington's withdrawal from the 2015 Iran nuclear deal, also known as the Joint Comprehensive Plan of Action (JCPOA).

The White House's move to leave the JCPOA was not supported by other signatories to the deal — China, France, Germany, Iran, Russia, the United Kingdom, and the European Union — which insisted that Iran was holding up its part of the deal.

*Daesh (ISIS/ISIL/IS/Islamic State) is a terrorist group banned in Russia and many other countries.