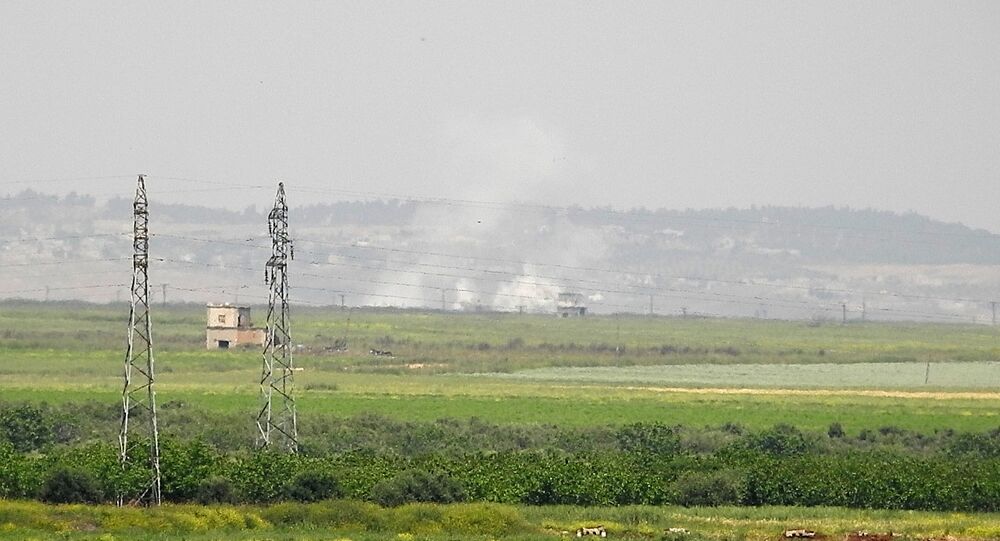 According to the Russian military, at least 50 militants were killed and one tank with 5 SUVs was destroyed.

"About 200 militants, two tanks, an infantry fighting vehicle, 13 all-terrain vehicles with heavy machine guns took part in the attack on the Syrian government forces. The attacking militant groups were scattered and retreated", the Russian military reported.

On Saturday, militants from Hayat Tahrir al-Sham group which emerged after the dissolution of Al Nusra shelled Syrian Hama province with 20 projectiles, killing at least 4 people and injuring 7 civilians, according to the Russian centre for Syrian Reconciliation. The terrorists have launched an offensive in the Idlib demilitarized zone, attacking positions of the Syrian government forces near the settlements of al-Hairat and Mgair in the north of Hama province.

"On the morning of 25 May 2019, militants of the Hayyat Tahrir al-Sham terrorist group from the Idlib de-escalation zone opened fire from multiple launch rocket systems at Ain al-Qrum and Al-Suqaylabiyah in the northern part of Hama province. 20 missiles have been fired. At least four civilians were killed in the attack, seven people were injured", the statement said.

The reconciliation centre called on all illegal armed groups to refrain from military provocations and follow the path of peaceful settlement of the crisis in the war-torn country.

Over the past few days, terrorists have made at least three large-scale attempts to attack government forces in the north of Hama province. Tanks, armoured vehicles and multiple launch rocket systems were used in the assaults. All the attacks have been successfully repelled by Damascus.

READ MORE: US Reports of 'Chemical Incident' in Syria Based on Terrorist Claims – Moscow

The Idlib province is the last major stronghold of terrorists and armed rebels in Syria. In September 2018, ceasefire guarantors Russia and Turkey agreed to set up a 9-12 mile deep demilitarized zone, in Idlib  which would be cleared of heavy weapons and militants. However, despite progress in the withdrawal of weapons and fighters from the area, remaining militants regularly commit ceasefire violations by shelling nearby provinces.

© AP Photo
Terror Chemical Attack Plotted in Syria's Idlib, Aleppo - Russian MoD
On Tuesday, US Department of State spokeswoman Morgan Ortagus said that the US was collecting information regarding an alleged chemical weapon attack that reportedly took place in Syria over the weekend and warned the Syrian government that it would quickly respond if use of chemical weapons by Damascus was confirmed.

The statement was made several days after the Russian Defence Ministry’s Syrian reconciliation centre warned that terrorists were preparing a provocation with the use of chemical weapons in the Syrian province of Idlib. Damascus denied reports about the chemical attack.

The Russian Defence Ministry's spokesman Maj. Gen. Igor Konashenkov has told reporters that Jabhat al-Nusra terrorists were the only "sources" and "eyewitnesses" of the alleged chemical attack.

READ MORE: France Stands by OPCW Amid US Claims of Chemical Attacks in Syria — Ministry