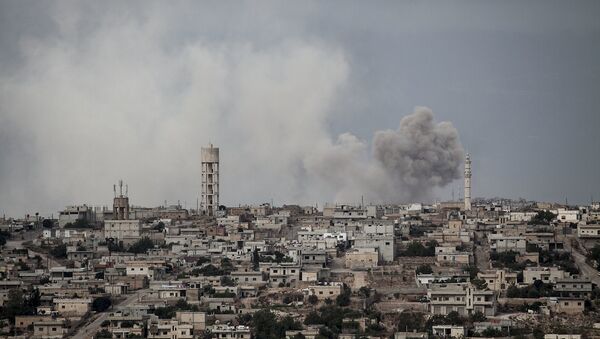 MOSCOW (Sputnik) - Terrorists in Syria are planning chemical attacks in the Idlib deescalation zone, as well as in the west of the Aleppo province, the head of the Russian center for Syrian reconciliation said on Tuesday.

"The militants plan to stage such provocations in the village of Jarjanaz, as well as in the town of Saraqib, where a group of children and adults — refugees from the southern provinces of Syria — have already been gathered. Similar preparations are underway in the west of Aleppo province", Maj. Gen. Viktor Kupchishin said at a daily briefing.

Kupchishin added that terrorists operating in the Idlib de-escalation zone possess a significant amount of poisonous substances with which they fill munitions to use in staged provocations aimed at accusing the Syrian army of "chemical attacks" against the civilian population.

Some Daesh Fighters Reached S Africa After Defeat in Syria - Russian MoD
"On 21 May 2019, militants of illegal armed groups under the leadership of the Nusra Front terrorist group attempted to attack the positions of government forces in the al-Habit, Kafr Nabudah and Kafr-Zeita area [in the Hama province] with the use of tanks and vehicles filled with explosives", head of the center, Kupchishin noted.

On Friday, the Russian Defence Ministry said that the Nusra Front terror group was preparing to stage a false-flag provocation in Syria's Idlib province as a means of framing the Russian Aerospace Forces for attacking civilians with chemical weapons.

The militants were planning to film the alleged poisoning of civilians next to fragments of the Russian munitions so that they could post footage across social platforms and western media outlets, the military added.

Over the past two weeks, terrorists have reportedly boosted the number of attacks on Syria's northwestern provinces, in particular in Idlib.

In early May, terrorists increased the frequency of attacks on the Syrian provinces of Hama, Aleppo and Latakia. They have also been attempting to attack Syrian army positions of the in the region. Government forces have responded by boosting attacks on terrorists in the province of Idlib.

Syria has been in a state of civil war since 2011, with forces backing the country's leader, President Assad, fighting numerous opposition groups backed by Western states, as well as  militants and terrorist organizations.