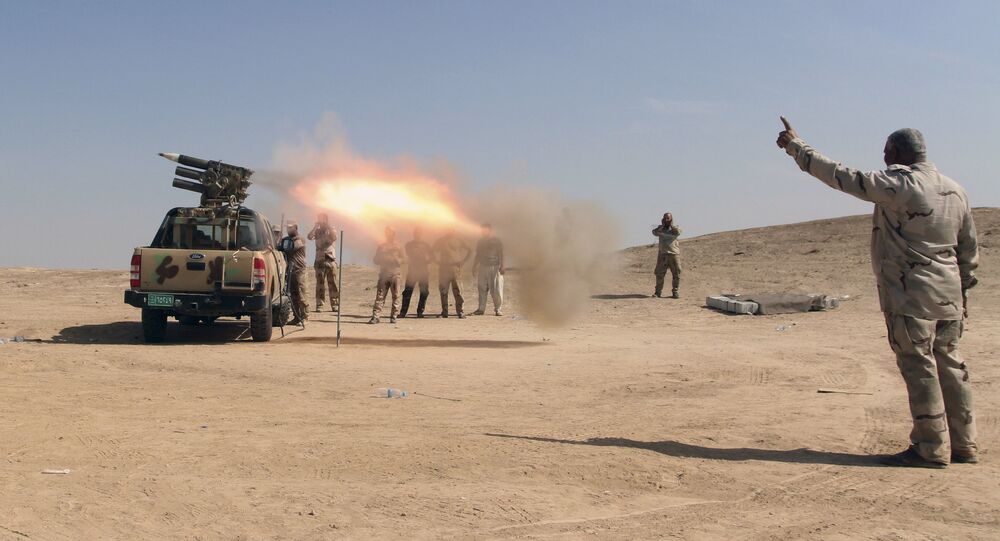 A pro-Israeli think tank published a report this week warning Tehran may be trying to station ballistic missiles among “Shia proxies” - pro-Iranian militias - in Iraq. The authors warn that if the US doesn’t act to remove this possibility, Israel will.

A report published by the Washington Institute for Near East Policy on Monday warns that Hezbollah al-Nujaba, a Shiite militia in Iraq, could potentially become the new host of Iranian short-range ballistic missiles that could target Israel, Saudi Arabia, Kurdish forces or even US forces in the event of a conflict.

"These Shia proxies have reportedly developed exclusive use of secure bases in the provinces of Diyala (e.g., Camp Ashraf), Salah al-Din (Camp Speicher), Baghdad (Jurf al-Sakhar), Karbala (Razzaza), and Wasit (Suwayrah). It is also widely accepted that militias have developed a line of communication and control to Iran through Diyala, allowing them to import missiles and equipment without government approval or knowledge. For example, artillery rockets may already have entered Iraq inside empty water or oil tankers, a tactic also used in Yemen. If so, Iran's playbook suggests that SRBMs [short-range ballistic missiles] and/or precision guidance systems could soon follow."

The authors note that ballistic missiles have been used to attack Israel, Saudi Arabia and US and Kurdish forces from Iraq before — by Iraqi President Saddam Hussein during the 1990-91 Gulf War. The report makes repeated references to Hussein, highlighting the possibility that Iran could pose a similar threat if the US doesn't act.

The report comes amid stern US warnings and powerful military buildup in the region, including the deployment of an aircraft carrier battle group and a strike force of nuclear-capable bombers. Earlier this week, US officials said initial assessments of a series of explosions on oil tankers in the Emirati port of Fujairah pointed to Iranian involvement.

"For its part, Israel is no doubt considering whether it should approach this potential threat following its older Lebanese mindset (i.e., do little until war) or its newer Syrian model (strike early before the missile threat develops into a formidable deterrent)," the WINEP report notes. "Either approach would spell trouble for the United States and Iraq, so both governments should take steps to spare Israel from making the choice in the first place."

However, such rhetoric must be called into question, given the academic think tank's close ties to the Israel lobby in the United States. While the think tank denies it is explicitly pro-Israel, WINEP was founded in 1985 by Martin Indyk, who at the time was working as a deputy research director for the American Israel Public Affairs Committee (AIPAC), which describes itself as "America's Pro-Israel Lobby." Indyk went on to become the architect of the US "dual containment" policy of hostility towards both Iraq and Iran in the 1990s before becoming US ambassador to Israel.

Rashid Khalidi, a Palestinian-American professor and director of Columbia University's Middle East Institute, blasted the think tank in a 2003 interview with Al Jazeera, saying it was "the fiercest of the enemies of the Arabs and the Muslims," and the "most important Zionist propaganda tool in the United States."

It seems almost natural, then, that WINEP would publish now, with war on the horizon with Iran, a report that concludes with a warning for the US to act against Iran before Israel is forced to.

In reality, the question of Iran's "proxies" is much more opaque.

The three groups mentioned in the report by name — Kataib Hezbollah, Harakat Hezbollah al-Nujaba and the Badr Organization — all formed part of the Popular Mobilization Forces called onto the battlefield by Baghdad in the dark days of 2014 and Daesh's advance through northern Iraq. Roughly 30 militia groups, together forming 125,000 men, answered the call, many of them from Iraq's Shiite majority, who in Daesh's extremist ideology are not seen as Muslims but as apostates. Shiites in Daesh-held territories have been subjected to brutal treatment, and Shiite holy sites in Syria and Iraq suffered as a result of Daesh occupation.

Muslims have commonly used the name "takfiris" to describe Daesh, which means that the group engages in the questionable practice of declaring other Muslims to be apostates — something most Muslims believe can only be determined by God.

The Popular Mobilization Forces, many of which received aid from Iran, as did the Iraqi government itself, helped turn the tide of the Daesh offensive, and by the end of 2017 they had ejected Daesh completely from Iraq.

In March, the US designated the 10,000-strong Harakat Hezbollah al Nujaba as a terrorist group and sanctioned its leader, Akram Kaabi. Kaabi is a Shiite cleric who rose to power during the US occupation of Iraq, and his militia, like many of those that went on to form the Popular Mobilization Forces, grew out of Iraqi mass resistance to that occupation in the mid-2000s.

However, a New York Times article last week noted that now that Daesh is gone, Baghdad is befuddled over what to do with these militias.

"If they have armed wings and are corrupt, no one can control them," former Prime Minister Haider al-Abadi told the Times earlier this year. Many have been absorbed into the Iraqi security forces — but they don't answer to the Defense or Interior Ministries, but rather to Abadi himself.

"In Iraq if you don't put controls on these groups, you will have these guys morph into networks that will range from semi-criminal entities to politically predatory forces that would act as a state within a state," warned Alex Vatanka, a senior fellow at the Middle East Institute.

However, Anthony H. Cordesman, a national security analyst at the Center for Strategic and International Studies, a right-wing think tank, told the Times, "The word ‘proxy' implies that these are tools of Iran, and they aren't."

Abadi didn't defend the group by name, but he did blast the US attitude on display, saying, "The Americans can make the decisions they want, but the Americans see things differently from the way we do, and our attitude toward the Popular Mobilization is well known and clear. We respect all of the groups of the Popular Mobilization that made sacrifices."

A Friday article in the Jerusalem Post by Jonathan Spyer, the director of the Middle East Center for Reporting and Analysis and a research fellow at the Jerusalem Institute for Strategy and Security and the Middle East Forum, took aim at Kaabi for his claims that Israel has used "takfiri" organizations, including Daesh, to wage a "proxy war" in Muslim lands.

Parrying Kaabi's claims, Spyer suggests it reflects a bolder attitude toward Israel being taken by Kaabi at the direction of Tehran, calling it "an indication of the growing involvement of Tehran's Iraqi servants in Iran's preparations for conflict with Israel."

Kaabi's claims are worth weighing more heavily, though. When he claimed in early 2016 to have proof of the funding of Daesh by Israel, Saudi Arabia, Qatar and Turkey, among others, his claims were widely ridiculed in the West. Yet in 2018, the Washington establishment staple Foreign Policy Magazine was forced to admit that Israel had funded and armed a dozen Muslim extremist militias in southwestern Syria in order to provide proxy resistance to Damascus as well as Iran and Daesh — something IDF Chief of Staff Gadi Eisenkot eventually admitted in January 2019 as he left office, the Times of Israel reported.

However, as early as May 2017, IDF officials speaking to Politico admitted they saw Daesh as the lesser evil compared to Iran.

Israeli army officers explain frankly why they support ISIS/al-Qaida in Syria and think US should too https://t.co/2J4qO25HJ3 pic.twitter.com/PLlBjEiQ7l

​"As far as these Israeli officers are concerned, the ideal strategy is to sit back and let both types of groups duke it out — and work to contain the conflict rather than trying to end it with military force," Politico's Bryan Bender wrote.

"The battle for deterrence is easier than the battle for influence," he quoted Army Brig. Gen. Ram Yavne, the head of the IDF's Strategic Division, as saying. When he asked Yavne if the US and its allies should permit Daesh to retain its conquered territory in Iraq and Syria, the intelligence officer told him, "Why not?"

US 'Sitting By the Phone' But Hasn't Heard From Iran Yet - Trump Admin. Official

Dangerous Game: Iran Could do 'Enormous Damage' to US Military - Iranian Prof