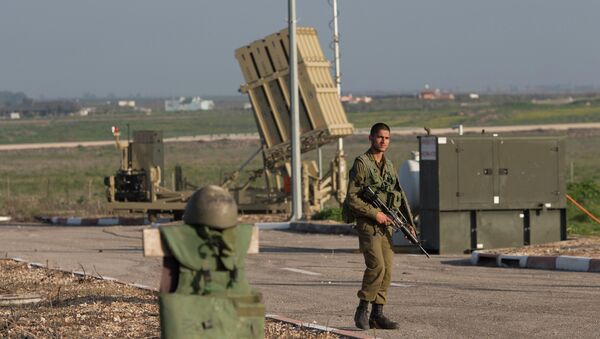 © AP Photo / Ariel Schalit
Subscribe
International
India
Africa
Earlier, US Secretary of State Mike Pompeo announced that the US is aiming to "fix" the situation, with Iran apparently serving as "the major destabilising influence in the Middle East" amid the concentration of US military assets, including a carrier group, in the region.

Israeli Energy Minister Yuval Steinitz said he fears that Israel cannot rule out attacks against itself if tensions between the US and Iran escalate into an armed conflict.

"Things are heating up, I would not rule anything out. Iran could fire missiles at Israel," Steinitz said, speaking to Ynet on Sunday.

The minister, who serves as a member of Prime Minister Netanyahu's security cabinet, added that he fears Iran may "activate" militant groups such as Hezbollah and Islamic Jihad in Gaza in a campaign against Israel.

Pompeo Says Iran is 'Major Destabilizing Influence' the US 'Aims to Fix'
Tel Aviv, one of Washington's key allies in the Middle East, has a long history of tensions with Iran, accusing it of using its anti-terrorism operations in Syria as a proxy for possible military attacks against Israel, and charging Tehran with providing anti-Israeli militants in Gaza and Lebanon with rockets and other military equipment. Iran has denied the claims.

Israel and the US have also repeatedly marked their concern over Iran's large arsenal of conventional missiles, and accused the country of secretly harbouring ambitions to become a nuclear power. Iranian Foreign Minister Javad Zarif has repeatedly dismissed these claims, alleging that Israel was the only country in the region with a functioning nuclear weapons programme.

Bases in Almost Every Direction: HERE is Where US Outposts Near Iran are Located
On Saturday, Iranian President Hassan Rouhani called for national unity and cohesiveness against what he said was a campaign of unprecedented pressure against his country by the US, with Iranian commanders and clerics warning that an American attack on Iran would be met with retaliation against the US' naval assets.

Rouhani's remarks came after the expiry of US sanctions waivers for major Iranian oil buyers on 2 May, and the deployment of the USS Abraham Lincoln carrier strike group and a bomber task force in the Middle East.

The Trump administration claimed the buildup was a response to intelligence about possible Iranian attacks against the US and its regional allies, and warned that an attack on US interests would be met with "unrelenting force."

Tehran dismissed the buildup as "psychological warfare," adding that the US "will not dare" attack the Islamic Republic. Iran also announced last week that it would be partially withdrawing from the Joint Comprehensive Plan of Action nuclear deal in 60 days unless its signatories could come up with a satisfactory way to meet their commitments to protect Iran's interests under the agreement. Washington withdrew from the deal a year ago and slapped Tehran with sanctions meant to cripple its economy and bring oil exports down "to zero."