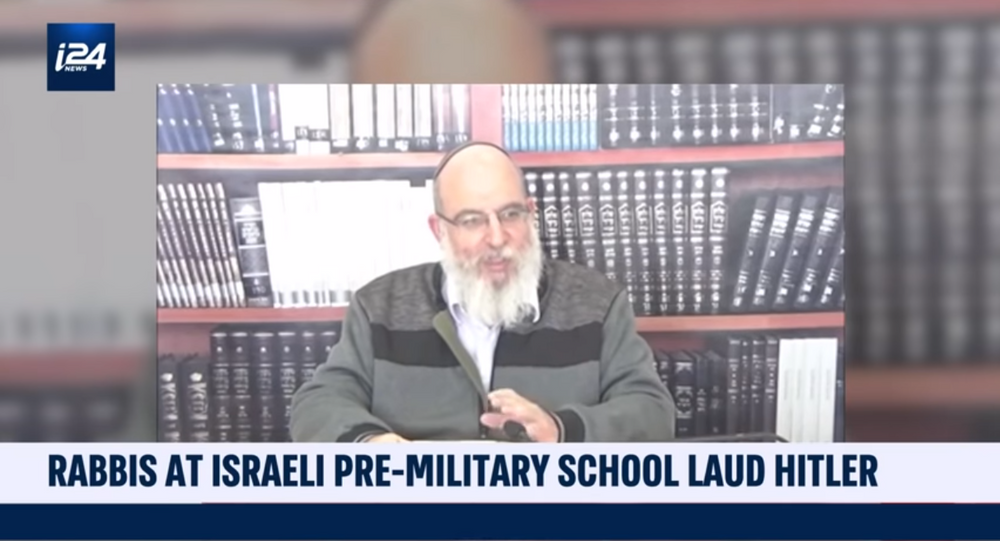 An Israeli media outlet has released a series of undated recordings, in which two rabbis from a West Bank religious academy can be heard praising slavery, defending Adolf Hitler’s ideology and making racist comments while speaking about Jewish supremacy.

In a recording published by Channel 13 news, Rabbi Eliezer Kashtiel, the head of the Bnei David pre-military academy in the settlement of Eli in the West Bank, is telling a class that being a “slave to a Jew is the best”:

“The gentiles will want to be our slaves. Being a slave to a Jew is the best. They’re glad to be slaves, they want to be slaves. Instead of just walking the streets and being stupid and violent and harming each other, once they’re slaves, their lives can begin to take shapes”, Kashtiel said as cited by Channel 13.

According to the media outlet, the rabbi goes as far as to claim that Arabs want to “be under the occupation” due to what he described as “genetic problems” and promotes Jewish superiority.

“All around us, we are surrounded by peoples with genetic problems. Ask a simple Arab ‘where do you want to be?’ He wants to be under the occupation. Why? Because they have genetic problems, they don’t know how to run a country, they don’t know how to do anything. Look at them. Yes, we’re racists. We believe in racism… There are races in the world and people have genetic traits, and that requires us to try to help them. The Jews are a more successful race”.

In another video from the batch, Rabbi Giora Redler can be heard openly saying that Adolf Hitler was the most “correct person there ever was” during a lesson on the Holocaust and lamenting that the Fuhrer was simply “on the wrong side”.

“Let’s just start with whether Hitler was right or not. He was the most correct person there ever was, and was correct in every word he said… he was just on the wrong side. The real Holocaust was not when they murdered the Jews, that’s not it. All these excuses – that it was ideological or systematic – are nonsense. Humanism and the secular culture of ‘We believe in man’, that’s Holocaust”, Redler said, according to Channel 13.

The rabbis’ comments have drawn widespread outrage, with some lawmakers calling to cut off funding for the academy until Redler and Kashtiel are removed:

“This is not Judaism, and these are not our values. People who talk this way are not worthy of calling themselves rabbis… the state needs to stop funding this program until the racist rabbis are removed”, Yair Lapid, Blue and White Member of Knesset, said in a statement.

The Anti-Defamation League (ADL) also denounced their remarks and called on the two to immediately apologise:

“We harshly condemn statements made by rabbis teaching at the Bnei David Yeshiva in the community of Eli. Rabbi Redler’s attempt to ascribe reason – not to say justification – to atrocities perpetrated by Hitler against the Jewish people is unconscionable. Statements made by Rabbi Kashitel regarding non-Jews, specifically Arabs, suggesting they are genetically inferior are disgraceful. Such words are especially grave coming from senior rabbis educating the next generation. We urge them to apologise without delay”.

After the undated clips emerged this week on TV, both Redler and Kashtiel admitted to having made the comments, but claimed that they were taken out of context.

© CC0
Pork-Curious: Rabbi Claims Artificial Meat is Exempt From Kosher Laws
Redler, for instance, said in a statement to Channel 13 that he was merely trying to “explain Hitler’s morbid logic”, while Kashtiel claimed that was “pained” that his “lesson on human rights” was misunderstood and misinterpreted.

This is not the first time that Bnei David teachers have found themselves at the epicentre of a nationwide controversy: last year, a video surfaced showing Rabbi Yosef Kelner telling students that women are “weak-minded” and have a reduced capacity for spirituality.

Back in 2017, Israel’s then-Defence Minister Avigdor Lieberman pledged to deprive the Eli-based academy of funding, but his effort was blocked by the attorney general for legal reasons. Lieberman’s move was prompted by remarks from Rabbi Yigal Levinstein, the co-founder of the academy, who spoke out against female conscription into combat roles in the IDF.