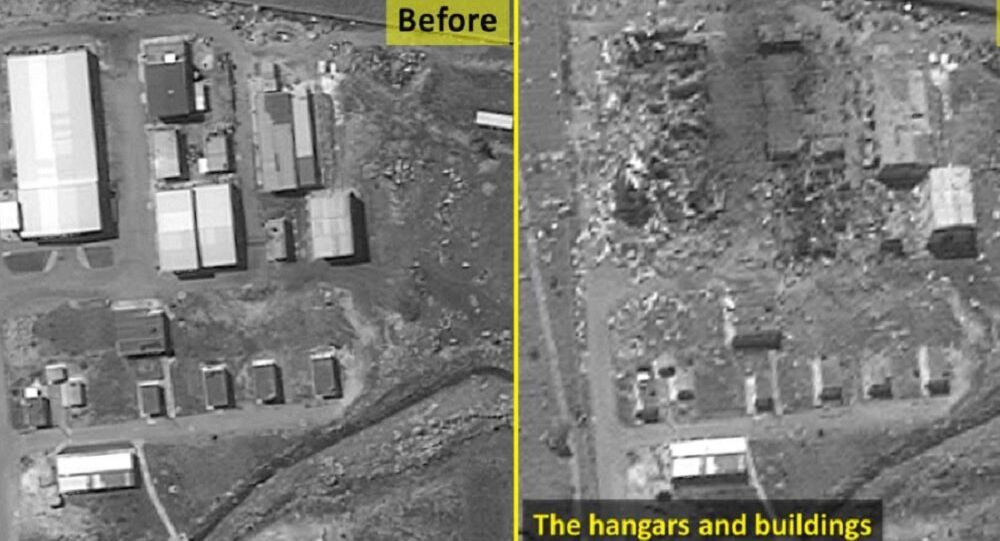 Israel reportedly carried out an airstrike against a military facility near the city of Hama in western Syria on Saturday, with Syrian air defences intercepting some of the missiles, said to have been launched from Lebanese airspace to hinder an effective defence.

Israeli satellite intelligence company ImageSat International has released satellite images of what it says may be 'Iran-related missile manufacturing hangers' in Masyaf, Syria.

The images, posted on the company's Twitter account, show unidentified structures 'before' and 'after' the attack, with several large buildings turned into what appear to be piles of rubble.

2/4 — The #SSM factory is located in the vicinity of other facilities which according to #OSINT are related to the #Iranian SSM project in #Syria. #ISI #Space #intelligence #VISINT #IMINT pic.twitter.com/CtLKm7mDwI

ImageSat was careful to note that it could not verify 'Iranian control' of the facility, nor the site's status as a missile factory, tweeting only that "If the bombed site in Masyaf, Syria was indeed a missile factory, it could allow production and assembly of different [surface-to-surface missile] elements or for improving the accuracy of missiles."

The intelligence firm also reported a lack of actual missiles or launchers identified in the compound, and the lack of protected structures traditionally necessary for the assembly of missile engines or warheads.

4/4 — If the #bombed site in #Masyaf, #Syria, was indeed a #missile factory, it could allow production and assembly of different #SSM elements or for improving the #accuracy of missiles. #ISI #Iran #VISINT #IMINT pic.twitter.com/SKGhO6FOBF

According to ImageSat, the alleged missile factory was reportedly built between 2014 and 2016, with the company also claiming that Iran likely controlled only the eastern part of a larger military facility, with the rest controlled by the Syrian Army.

Israeli Prime Minister Benjamin Netanyahu, recently reelected for a fifth term in office, appeared to comment on the assault "on the northern front" on Sunday, warning that Israel would continue to act on all fronts, including on the northern front, because we are not prepared to allow someone to establish power and endanger the State of Israel."

Israel has repeatedly accused Iran of using Syria as a foothold for possible future military operations against Tel Aviv, and has carried out hundreds of airstrikes against suspected 'Iranian targets' in the war-torn country. Tehran has denied the claims, but concedes it has provided military advisers and technical and arms assistance to Syria on Damascus' request to help the country in its fight against Islamist terrorism.