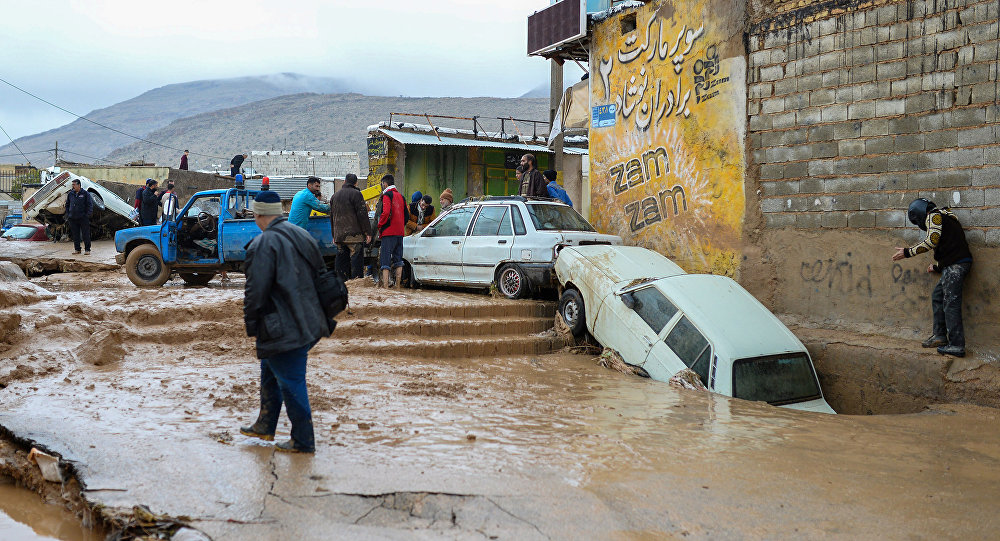 Iran has been battling its worst flooding in decades, with heavy rain and flash floods killing over 40 people and causing hundreds of millions of dollars in damage to infrastructure and agriculture, destroying up to 25,000 homes.

Iranian Foreign Minister Mohammad Javad Zarif has lashed out at the Trump administration's vow to bring "maximum pressure" to bear against his country, tweeting that the move led to the "flouting" of UN Security Council Resolution 2231 on the Iranian nuclear agreement and hindered the provision of aid to communities suffering from flooding.

Zarif's remarks come on the heels of new emergency alerts and travel advisories by Iranian authorities, with flooding said to have affected at least 23 of Iran's 31 provinces, according to a report by the Iranian Red Crescent Society.

© AP Photo / Vahid Salemi, File
US Considers Introducing Additional Sanctions on Iran in May – Reports
On Monday, a senior White House official said that the US was considering applying additional sanctions against Iran in time for the first anniversary of the US withdrawal from the Iran nuclear deal in May 2018.

Zarif's sentiments were echoed by other social media users, who suggested US behaviour amid the flooding was "shameful."

The video footages of flooding are really shocking. It is a shame on the us for using instruments of economic pressure against the people of Iran at this critical juncture when many people are in trouble in the flood affected areas. May God bless iran!

Trump and his clique do not understand the meaning of humanity! He & Netanyahu enjoy of the people misery in Iran.

Others attacked Trump on Twitter after the president tweeted that his administration has "succeeded in dramatically raising the costs to Iran for its sinister behaviour," with one user saying only a "morally weak" person could "celebrate that life is made more difficult for over 80 million people due to illegal and politically motivated sanctions."

While there are over 42 people dead and great portion of Iran under water due to floods, only a morally weak would celebrate that life is made difficult for over 80 million people, due to illegal and politically motivated sanctions.

© AP Photo / Andrew Harnik
US to Continue Maximum Pressure on Iran Until Tehran Changes Behavior - Bolton
Iran-US relations have been poor for decades, with the two powers having no formal diplomatic ties since shortly after the 1979 Iranian Revolution which toppled the pro-US Shah regime. Relations improved somewhat after Iran, the US, Russia, China and several European states signed the Joint Comprehensive Plan of Action nuclear deal in 2015, which provided Tehran with sanctions relief in exchange for a halt to its nuclear weapons program.

Relations collapsed to new lows in May 2018, however, after President Trump unilaterally withdrew Washington from the nuclear deal and slapped Iran with several rounds of increasingly severe sanctions.