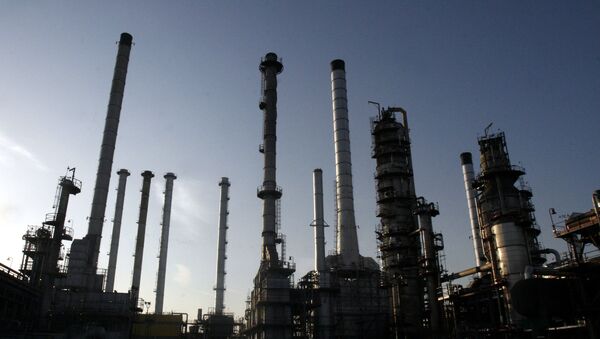 © AP Photo / Vahid Salemi, File
Subscribe
International
India
Africa
The US government is considering additional sanctions against Iran that would target areas of its economy that have not been hit by two packages of sanctions introduced last year.

A senior Trump administration official told Reuters on Monday that the US intends to follow through on its policy towards Iran with new sanctions around the first anniversary of the US withdrawal from the 2015 JCPOA nuclear deal.

“We just want a continued chilling effect,” the official said. “We want businesses to continue to think doing business with Iran is a terrible idea at this point.”

Sanctions Against Iran and Venezuela Made US Leader in Oil Production – Expert
The official, speaking on condition of anonymity, said the administration hoped to take the additional measures in the coming weeks.

“The more we can do around the anniversary, the better,” the official said, adding that it takes time to put such sanctions together and that the US Treasury Department was working on them.

One of the potential areas, according to the official, would be changing the existing waivers to eight Iranian oil buyers that had been introduced with the latest sanctions back in November. Reducing the number of waivers would limit oil exports from Iran, the fourth-largest producer in OPEC. The United States set an earlier target of driving Iranian oil exports to zero, and the official said that goal had not changed.

Trump announced that the United States would pull out of the 2015 international agreement last May and ordered sanctions be imposed again on the country in two packages that followed during the course of the year. The deal agreed by the United States, France, Britain, Germany, Russia, China and Iran, sought to prevent Tehran from developing its nuclear technologies in return for the removal of sanctions on Iran’s economy.